Pakistan government accused of sabotaging human rights commission | Asia | An in-depth look at news from across the continent | DW | 07.04.2021

Critics say officials are stalling the relaunch of the watchdog to avoid accountability for rights violations. A top court has ordered the ruling party to fill empty positions after the previous ones expired in 2019. 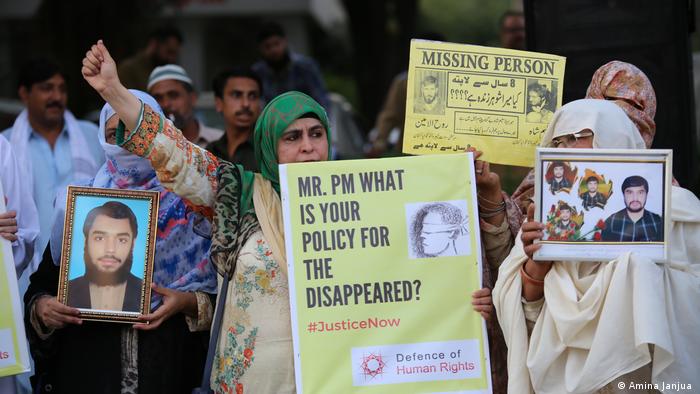 A top court in Pakistan has called on the ruling Tehreek-e-Insaf party to revitalize the country's National Commission for Human Rights (NCHR), an independent rights watchdog that has been inactive since 2019, amid accusations that the government is deliberately stalling its functioning.

Activists and former NCHR workers have accused Prime Minister Imran Khan's government of delaying the appointment of leadership roles in the commission in order to avoid facing accountability for human rights violations— especially those committed at the hands of the country's military.

After finding several faults with the government's previous advertisements for leadership roles in the commission, the Islamabad High Court (IHC) on March 29 directed the federal government to issue an advertisement for a new chairman and NCHR members.

Chief Justice Athar Minallah ruled the previous advertisement for the NCHR positions to be unconstitutional. The first advertisement included a maximum age limit, which the court ruled should be removed to make the selection process more inclusive.

Another issue was raised regarding the ambiguity of the language of the advertisement, as the expression "inviting suggestions for suitable persons" did not hold the same meaning as the term "inviting applications."

The former chairman of the commission, Justice Ali Nawaz Chowhan, told DW that these inconsistencies in the advertisements were intentionally placed by the government, as officials have a vested interest in sabotaging the commission's efforts to monitor and report on mounting human rights violations,such as enforced disappearances.

"This government neither has the urge nor the passion to truly work for human rights. What is the point of having a Ministry of Human Rights without having an independent human rights commission?" said Chowhan.

The four-year tenure of NCHR members expired on May 30, 2019, and since then, the roles have not been filled.

The NCHR Act was introduced in 2012 to mandate the promotion, protection and fulfillment of human rights according to the constitution and international treaties. One of the mandates is to abide by the Paris Principles, adopted by the UN General Assembly. Pakistan is a beneficiary of economic benefits under the Generalized System of Preferences (GSP) and is responsible for implementing the UN's Core International Human Rights Treaties.

Though the commission was established in order to meet the criteria set by international conventions, critics say future NCHR findings could put Pakistan's economic benefits, such as the GSP, at stake.

"The government has reduced the NCHR to a skeleton. We published 35 reports, bringing attention to and investigating human rights violations, but the government does not want its failures exposed, which is why they are delaying these appointments: so that the international image does not suffer," said Chowhan.

Human Rights Minister Shireen Mazari denied that the government was deliberately delaying the appointments, and told DW that officials had followed due process by advertising in 2019, at the end of the last term.

Mazari said NCHR posts were readvertised in October 2020, and added that Khan had sent a list of preferences to the head of the opposition in December.

"We keep getting excuses from the opposition, who are yet to send us their nominations. They keep saying it is because he [opposition leader Shahbaz Sharif] is in jail, but it's not like he is not functioning. The pressure should be on the opposition, not us, so we can actually move forward from this matter," said Mazari.

She said the delay was also caused by logistical and legal bottlenecks. "We either change the whole law to be more smooth or make do for now, this is how it's operating at the moment,” she said.

According to the CIVICUS Monitor's December 2020 report, the state of civic space in Pakistan continues to be classified as "repressed." According to Human Rights Watch, in 2020 the Pakistani government harassed and at times prosecuted human rights defenders, lawyers and journalists for criticizing the government, and used draconian sedition and counterterrorism laws to stifle dissent.

Prominent human rights defender Tahira Abdullah told DW that she believes that Pakistan's human rights activists have a duty to stand up for a fully independent NCHR.

"The NCHR can only be effective if a truly independent chairperson and commissioners are appointed, and only if there is an end to all interference in the NCHR's autonomy, committed by state institutions, political offices and bureaucracy," said Abdullah.