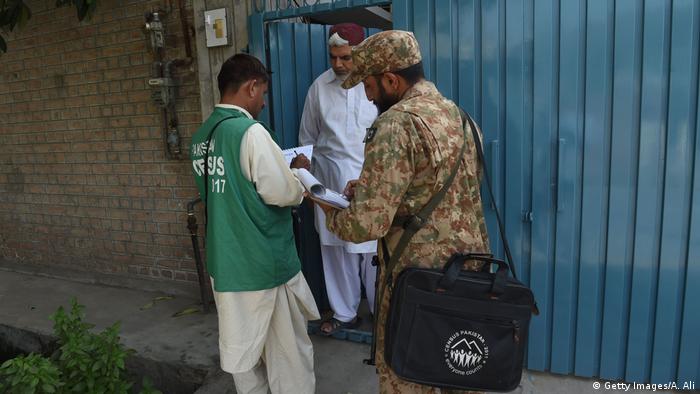 Pakistan received condemnation Friday for excluding a persecuted group from a new official body set up to safeguard the rights of religious minorities.

The NGO Human Rights Watch became the latest international voice to condemn the exclusion of the Ahmadiyyah community. Ahmadis make up 4 million people in Pakistan.

Pakistan's Cabinet established the National Commission for Minorities on Tuesday, instructing the Ministry of Religious Affairs not to include representatives from the Ahmadi community.

"The Ahmadis are among the most persecuted communities in Pakistan and to exclude them from a minority rights commission is absurd," said Brad Adams, Asia director at Human Rights Watch.

"Keeping Ahmadis off the commission shows the extent to which the community faces discrimination every day," he added.

Read more: Who are the Ahmadiyya Muslim Jamaat?

The religious affairs ministry had previously expressed support for the inclusion of the Ahdamis, but Pakistan's government appears to have vetoed this. The independent Human Rights Commission of Pakistan has already rejected the body based on its composition.

The Ahdamiyya community have faced death, intimidation and a hate campaign for decades. Pakistan declared the group non-Muslims in 1974, although the community say they are a sect of Islam.

The group regard their founder, Ghulam Ahmad, as a prophet. Orthodox Islam says there can be no prophet after Muhammad. Ahmadis live all over the world and number up to 20 million.

Ahmadiyya spokesman Saleem Uddin said the community did not want to be part of the commission anyway, but regretted that his community had not been invited.

Coronavirus and Islam: Pakistani clerics refuse to shut down mosques

As Islamic clerics refuse to stop allowing religious congregations, Prime Minister Imran Khan continues to downplay the coronavirus threat to his country. Could this be a "recipe for disaster" for Pakistan? (31.03.2020)

Thousands of Pakistani women took part in the Women's Day march, defying threats by Islamist groups. Ahead of the March 8 demonstrations, conservative sections orchestrated a smear campaign against feminist activists. (08.03.2020)