Roads were cut off in several Pakistani cities overnight as members of the Islamist TLP party demanded the release of their leader. Authorities say roadblocks disrupted oxygen deliveries to Lahore hospitals. 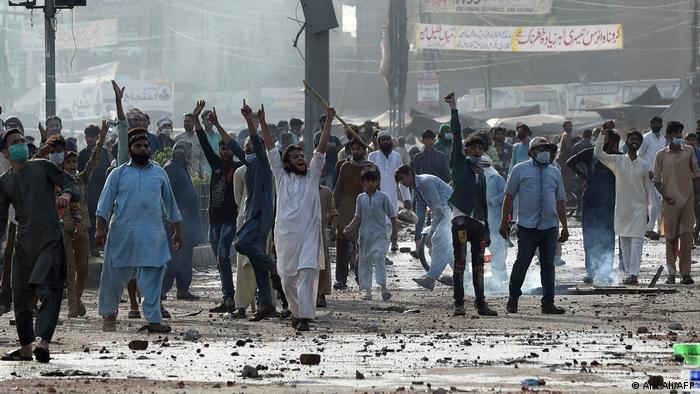 The religiously-charged protests started after the arrest of Saad Rizvi

Members of the far-right Tehreek-e-Labiak Pakistan (TLP)  clashed with police in Pakistan on Tuesday after the party's leader was arrested for demanding the expulsion of the French ambassador, officials said.

At least one police officer and one protester died during the second day of clashes in Lahore, the country's second-largest city, authorities told Reuters.

Rizvi was arrested on Monday for giving the government an ultimatum to send the French ambassador away or face protests. The row is linked with the publication of cartoons of the Prophet Muhammed.

Police fired tear gas to push back and reopen highways, but protesters remained in control of some parts of the city, a police official told the DPA news agency.

What happened during the protests?

Several hundred people were arrested in the clashes, and paramilitary forces were required to come in and support local police.

One police officer died on Tuesday after being beaten by angry crowds during the night.

The protesters also put the treatment of critically ill COVID-19 patients at risk after by blocking the roads, authorities said.

"Please do not block roads for ambulances and for visitors to the hospitals. Some ambulances are carrying oxygen cylinders, which are extremely essential for COVID patients," leading Punjab health official Yasmin Rashid said.

Roads were still blocked on Tuesday in several other cities, including the capital, Islamabad, and Karachi in the south, EFE reported.

"The protests are continuing in the main cities. We will carry on protesting until Saad Rizvi is freed," TLP spokesperson Ali Raza told the EFE agency.

What are people protesting?

The TLP has gained support for its rallying cry against blasphemy. They were able to force the government to endorse a boycott of French products through similar protests last year.

Those protests sprung up at the same time as protests in other Muslim countries against France's response to the beheading of a French teacher who showed cartoons mocking the Prophet Muhammad in his class.

Depictions of the prophet are widely considered blasphemous, and the reprinting of the cartoons in France was condemned by Pakistani Prime Minister Imran Khan at the time.

Rizvi called for further protests as an ultimatum after accusing Pakistan's government of going back on its agreement to expel the French ambassador.