Pakistan: Are attacks on Chinese workers jeopardizing Beijing′s CPEC projects? | Asia | An in-depth look at news from across the continent | DW | 28.04.2022 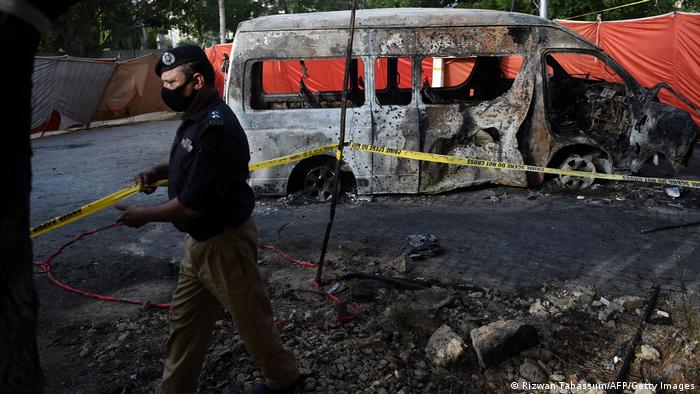 On Tuesday, a female suicide bomber attacked a minibus in the southern Pakistani city of Karachi, killing three Chinese nationals and their Pakistani driver.

The bombing was claimed by the so-called Baloch Liberation Army (BLA), a separatist group fighting for the independence of Pakistan's southwestern Balochistan province, which borders Iran and Afghanistan.

The attack is the latest carried out by Baloch separatist groups on Chinese citizens, who in recent years have been attacked more frequently while working on massive infrastructure projects under Beijing's Belt and Road Initiative.

China's Foreign Ministry condemned the bombing and has demanded that Islamabad punish the perpetrators and protect Chinese citizens by preventing attacks from happening again.

"The blood of the Chinese people should not be shed in vain, and those behind this incident will surely pay the price," the Foreign Ministry said in a statement.

Pakistani Prime Minister Shehbaz Sharif condemned the "heinous" attack as a "cowardly act of terrorism" and promised that the attackers would face justice.

Pakistan and China have become close partners in recent years, as China seeks to expand its regional influence with massive infrastructure projects to improve connectivity between China and the Middle East.

In 2015, China announced an economic project in Pakistan worth $46 billion (€41 billion), of which the Balochistan region is an integral part.

With the China-Pakistan Economic Corridor (CPEC), Beijing wants to expand its influence in Pakistan and across Central and South Asia in order to counter US and Indian influence.

The CPEC aims to link Pakistan's southern Gwadar Port on the Arabian Sea, 626 kilometers (389 miles) west of Karachi, to China's western Xinjiang region via a series of road, rail and pipelines.

China's projects cross territory that for years has been the setting for a violent separatist movement led by the BLA, which since 2000 has carried out attacks targeting the Pakistani government.

Now, the separatists say both Beijing and the Pakistani government are exploiting Balochistan's resources with the CPEC projects.

In 2018, the BLA expanded their operations and attacked the Chinese Consulate in Karachi, but failed to enter the compound.

In April 2021, a suicide attack at a luxury hotel hosting the Chinese ambassador in Quetta killed four people and injured dozens. The ambassador was unhurt in the attack.

Pakistan has long accused its archrival, India, of covertly supporting the Baloch insurgents in the province, a charge New Delhi denies.

In recent months, the BLA has stepped up attacks, targeting the Pakistani military in retaliation for providing security for China's projects. Last week, before the Karachi bombing, a Pakistani military officer was killed in a gunfight with Baloch separatists.

"The attacks have been rising for quite some time, a reflection of increasingly emboldened separatist militants angry about Chinese investments, and a growing capacity to carry out these types of operations," Michael Kugelman, a South Asia expert at the Washington-based Woodrow Wilson International Center for Scholars, told DW. 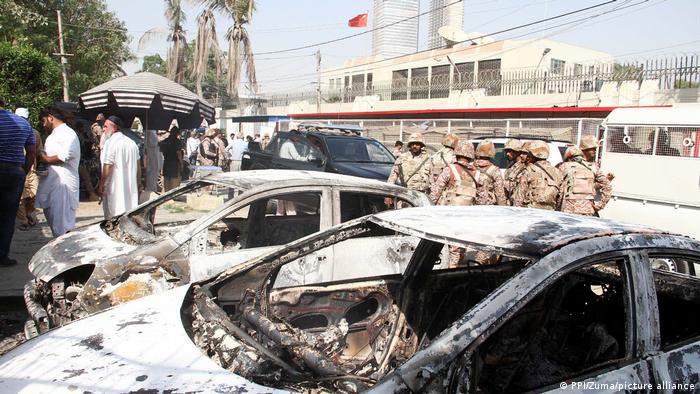 In 2018, the Chinese consulate in Karachi was targeted by BLA militants

How will Pakistan and China respond?

Analysts say Beijing is becoming more concerned about security threats to Belt and Road investment projects, which could jeopardize new investment and the completion of projects.

"What should be concerning for Beijing is that these deadly attacks of terror continue to play out, even after the Chinese authorities have pressured Islamabad to provide more security," Kugelman said.

"It's an indication of the limits of Pakistan's capacity to keep Chinese nationals safe, and this is certainly unsettling for Beijing," he added.

"Beijing was uncomfortable with the previous government of Imran Khan for slowing down CPEC and exposing Chinese to militants, but the new government of Shehbaz Sharif may push security agencies to expedite efforts for specific military operations against militant Baloch factions," Qamar Cheema, an Islamabad-based security analyst, told DW.

"China may slow down their operations, as the BLA is directly targeting Chinese installations and people. China may enhance pressure on Islamabad, primarily Shehbaz, who will likely travel to China soon to discuss Chinese loans," Cheema said.

Is the BLA changing its strategy?

The BLA said the Karachi bombing was carried out by a 30-year-old woman. According to reports, she had been a teacher, and was enrolled at a university.

"The use of a female suicide bomber in the attack does potentially indicate that the tactics and strategies of the BLA are evolving," Niloufer Siddiqui, a Pakistani political science professor at SUNY Albany in the United States, told DW.

"It should also make us rethink some of our assumptions about the motivations which lead people to join groups like the BLA," she said.

"It's an indication of the depth of radicalization within the ranks of Baloch militancy, and a sobering reminder that the intensity of grievance is so strong that gender and socioeconomic factors won't stand in the way," he added.

Cheema said Pakistan's security apparatus should think differently about the dimensions of conflict with the BLA.

"Urban middle-class youth with educated backgrounds are involved in this new wave of terrorism against Chinese interests and the Pakistani state," he said.

"Baloch youth are concerned about collective humiliation of Baloch masses from the Pakistani state. ... They do not see themselves as part of the Pakistani social fabric because they are alienated and do not participate in decision making," he added.