Paco Alcacer's stunning start to his Borussia Dortmund career has persuaded the club to agree a permanent deal for the Spanish striker. Alcacer was on year-long loan from Barcelona and has inked a five year deal. 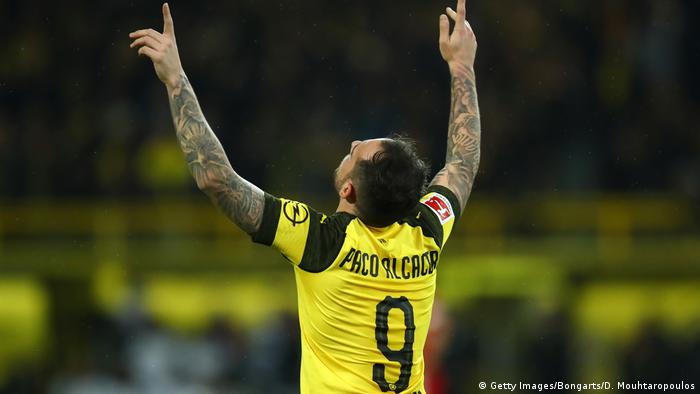 Mass circulation newspaper Bild and prominent football magazine Kicker both reported on Friday morning that the German club had reached an agreement with their Spanish counterparts for the free-scoring front man and Dortmund confirmed the news later in the afternoon with a tweet.

Alcacer joined Dortmund on a one-year loan deal at the end of the summer transfer window. The 25-year-old scored 21 minutes into his debut from the bench against Eintracht Frankfurt and has gone on to score seven more goals despite his appearances being limited by fitness issues.

"He's a real goalscorer with high footballing quality who has already been decsive in important games for us," said BVB sporting director Michael Zorc. "We look forward to many more goals and assists."

The goals Alcacer has registered already included a memorable hat trick, also from the bench, against Augsburg as Dortmund rallied from behind to win 4-3 and Alcacer has scored at a remarkable rate of a goal every 29 minutes in the league.

Despite that, the pre-arranged fee for the Spanish international, is thought to be about €21 million ($24 million) with add ons potentially increasing the price another €5 million.

Five big questions ahead of the Bundesliga's return

Can Borussia Dortmund's young guns sustain their title challenge? Should Bayern learn from others? And can Domenico Tedesco find some goals from somewhere? DW examines the big issues ahead of the Bundesliga's return. (22.11.2018)

Dutch winger Arjen Robben has admitted that he doesn't think Bayern Munich are good enough to retain their Bundesliga title. But his view is not shared by everyone at a club where unity currently seems in short supply. (23.11.2018)