Over half of the global population lack social protection | Business | Economy and finance news from a German perspective | DW | 01.09.2021 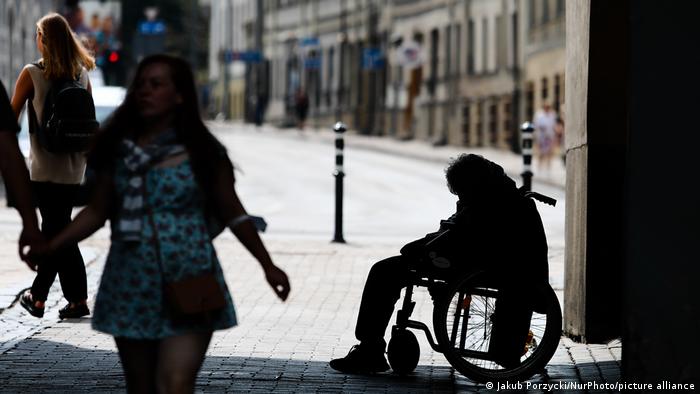 In 2020, just 47% of the world population had effective access to at least one social protection benefit, the ILO found. The remaining 53% — up to 4.1 billion people — had no protection at all.

Social protection includes access to health care and income security, for example in cases of unemployment, inability to work, old age and for families with children.

"We are only as safe as the most vulnerable among us; our well-being and destinies are intimately entwined, regardless of our location, background or work," wrote ILO Director-General Guy Ryder in the report's introduction. "If some people cannot count on income security while sick or in quarantine, then public health will be undermined and our collective well-being jeopardized."

Most children around the globe had no social protection, the ILO found. Only one in four children worldwide receive a social protection benefit and only 45% of women with newborns get a cash maternity benefit.

Just one in three people with severe disabilities can access disability benefits and only one in five people around the globe are covered if they lose their job.

Three-quarters of people over retirement age have access to some sort of pension, however coverage varies sharply between regions, rural and urban areas and men and women.

Gap between rich and poor grows

The report also examined the impact the COVID-19 pandemic has had on social protection: The additional spending that would now be required to ensure minimum social protection for all, known as the financing gap, has gone up approximately 30% since the start of the pandemic, the report found.

The global health emergency caused by the coronavirus has provoked governments to unleash significant social protection spending. This has included increasing benefits, improving delivery mechanisms, and extending coverage to groups that were previously unprotected

Compounded by an uneven vaccine rollout, these gaps in social protection also point to a greater likelihood of an uneven global recovery from COVID-19.

Social protection could provide wide-ranging social and economic benefits for countries at all levels of development, Shahra Razavi, director of the ILO's Social Protection Department, said in a press release. These include better health and education, more sustainable economic systems, better managed migration and an improved observance of human rights.

"There is an enormous push for countries to move to fiscal consolidation, after the massive public expenditure of their crisis response measures," said Razavi. "But it would be seriously damaging to cut back on social protection — investment is required here and now."