One of the largest spending plans in US history has passed through the Senate after half a day of debate and deliberation. It will now return to the House of Representatives. 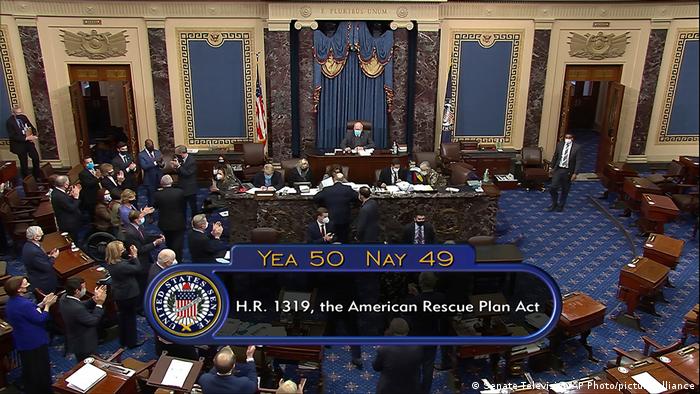 Democrats in the US Senate managed to vote through a relief bill on Saturday that aims to release trillions of dollars to support workers and businesses hit hard by the coronavirus pandemic.

The bill was approved along party lines after the longest voting session in the institution's modern history. Just shy of 12 hours were needed to find a satisfactory compromise for centrist Democrats who opposed increasing unemployment benefits.

The bill must still return to the House of Representatives before passing into law. It would see a total of $1.9 trillion (€1.6 trillion) of financial relief.

It passed through the Senate with a vote of 49-50 after Republican Senator for Alaska Daniel Sullivan left on Friday for a family funeral, meaning that Vice President Kamala Harris did not have to step in to break the tie.

The bill, popular among US voters, has been a priority for Joe Biden's administration.

What does the relief package include?

Some 9.5 million people lost their jobs last year when the pandemic hit. The White House has said it could take years to replace those jobs. Data on Friday showed that 379,000 new jobs were added in February, more than economists had expected.

The total planned spending for the package represents almost one-tenth of the entire US economy.

How did Democrats and Republicans respond to the bill?

"We tell the American people, help is on the way," Senate Majority Leader Chuck Schumer said after the monumental session.

"Our job right now is to help our country get from this stormy present to that hopeful future," he added.

President Biden thanked Schumer and other Democrats in the Senate for the "giant step forward," in a tweet on Saturday.

"I hope the American Rescue Plan receives a quick passage in the House so it can be sent to my desk to be signed," he added.

Republican Minority Leader Mitch McConnell was less celebratory, saying that the Senate had never spent so much money in "a more haphazard way."

The band of moderate Democrats, including Senator Joe Manchin from West Virginia — a state that voted strongly in favor of Donald Trump — incensed the progressive wing of the party by watering down some of the proposals and outright blocking the minimum wage increase.

The arduous slog faced by the new administration's first major piece of legislation casts an ominous shadow on future attempts to pass progressive bills through a Congress that the Democrat party only narrowly controls.