Over a thousand migrants land in Spain's Canary Islands

More than a thousand migrants in 485 small boats have landed in the Canary Islands in the past two days. Tightened security along Morocco's coast has pushed migrants and traffickers to risk the Atlantic crossing. 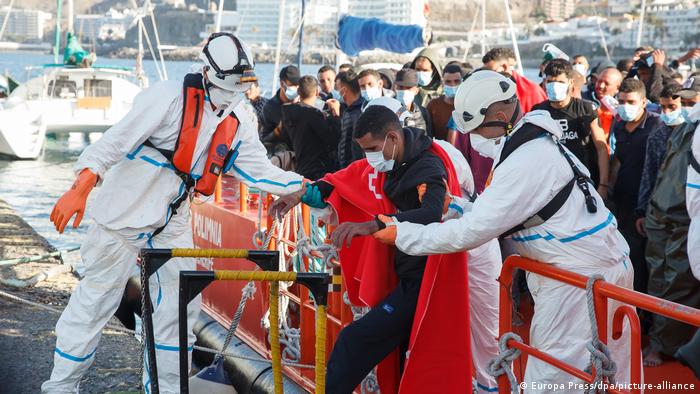 Spain's Canary Islands saw the largest number of migrant arrivals since 2006 in the past 48 hours, the Red Cross said on Saturday.

Between Thursday and Saturday, 1,015 people landed in 485 boats in the seven Spanish islands, a Red Cross spokesman said. They reportedly traveled across the Atlantic in small fishing boats and were met by sea rescue vessels close to the islands.

Spain had seen a surge of sea migration in recent years, but the flow of arrivals had diminished nearly 5.8% between January and September. Arrivals to the Canary Islands, however, have surged by 523.7%, Interior Ministry data shows.

Most of the migrants came from North Africa or sub-Saharan African nations. They arrived in good health, though some were suffering symptoms of hypothermia, the Red Cross said.

All of them have been tested for the new coronavirus, the official said.

Local politicians have urged the Spanish government to provide them with more resources to accommodate the influx.

"Our goal is to have a stable network of accommodation resources in the Canary Islands," tweeted Immigration Minister Jose Luis Escriva after a visit to the islands on Saturday.

As Morocco has tightened security on its Mediterranean coast, traffickers and migrants have been pushed to risk the perilous crossing to the Canaries, which is located around 60 miles (97 km) to the west of the Atlantic coast, analysts and rights groups say.

At least 251 people died attempting the dangerous crossing between January 1 and September 17, according to the International Organization for Migration.