In what's becoming a regular event on Monday evenings, protesters took to the streets of Berlin, Cologne, Cottbus and Rostock, as well as several other locations across Germany. 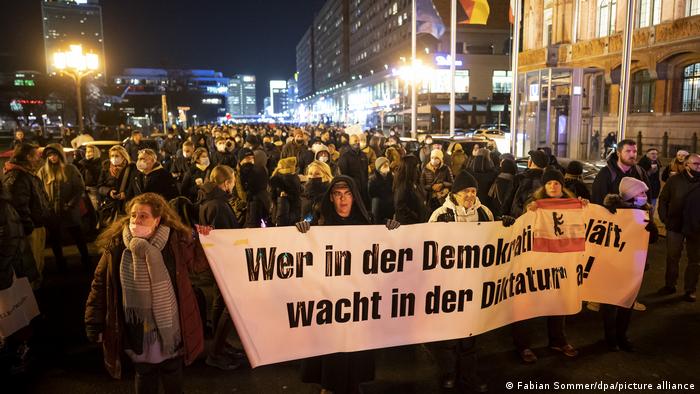 Tens of thousands of people took to the streets across Germany on Monday night, as citizens vented their frustrations over the country's coronavirus measures.

Many of those who attended brandished signs and banners to show their disapproval of a possible vaccine mandate.

According to one estimate based on police data, more than 70,000 people attended the various rallies across the country.

The protests were were accompanied by a large police contingent, and in some places counter-demonstrations also took place.

Several gatherings occurred in the northern port city of Rostock, as well as the eastern cities of Bautzen and Cottbus, with most in attendance not wearing face masks or adhering to social distancing.

Several of the demonstrations were broken up by police either because they were not properly registered or because people were not abiding by health and safety requirements. Police intervened in both Rostock and Bautzen. 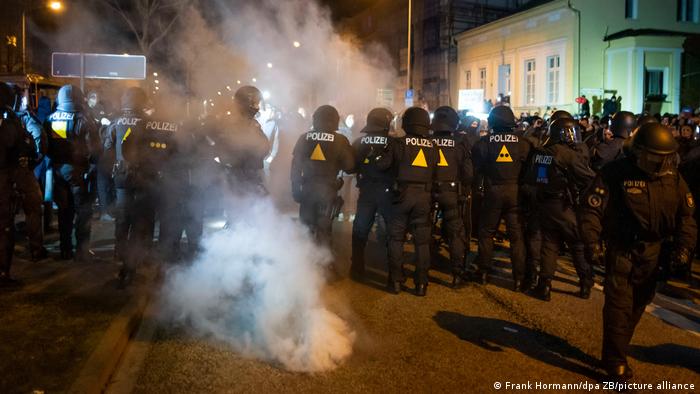 Police had to intervene in Rostock and break up the protest

Most of the demonstrations were peaceful, however.

In Thuringia alone, some 21,000 took to the streets, according to police figures, while in the state of Bavaria around 14,000 participated in rallies against Germany's COVID measures.

In Berlin, police estimated a turnout of about 3,000, where people marched on major landmarks like the Brandenburg Gate.

Protesters are opposed in particular to the potential prospect of obligatory vaccination for all in Germany, which is not yet law.

The protests come as German Health Minister Karl Lauterbach suggested this might be preferable to a renewed lockdown in the coming months.

"I would prefer that we protect [the unvaccinated] with a general obligation to be vaccinated, rather than with restrictions for everybody in the spring," Lauterbach said.

One banner in Berlin described the crowd as a gathering of "the vaccinated and the unvaccinated opposed to compulsory vaccination," while another said "whoever sleeps in a democracy wakes up in a dictatorship."

"Merkel, Spahn, Steinmeier, Drosten to jail" could be heard from a car loudspeaker in the German capital, referring to the former chancellor, former health minister, current president and a prominent German virologist.

One speaker berated the "German media," saying they were "compliant," using a term used to describe press coverage in 1933 after Adolf Hitler's NSDAP took power.

However, hospitalization and death rates are not rising at the same speed as yet. One probable reason for this is the number of people who have been vaccinated. Another likely reason is the fact that omicron tends to cause less severe symptoms than other COVID variants.