COVID: Germany sputters on vaccine mandate | Germany | News and in-depth reporting from Berlin and beyond | DW | 17.01.2022

Chancellor Olaf Scholz has said he favors compulsory jabs for everyone eligible, and similar measures have already been put in place in other EU countries. However, many hurdles remain. 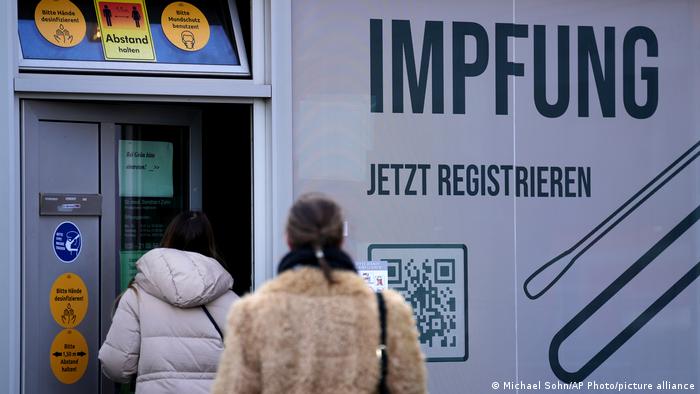 As the omicron variant sends the number of coronavirus infections skyrocketing across Germany, the new government led by Chancellor Olaf Scholz has said vaccinations remain the cornerstone of the fight against COVID-19.

Germany is lagging behind many of its neighbors: Only 72.7% of people have had two jabs, 47% have had a booster, too, and 17 million adults remain unvaccinated.

Though Scholz vowed "strong leadership" when it came to crafting pandemic policy, the opposition now claims that leadership is exactly what is lacking in the attempts to introduce compulsory vaccination.

In December, the governing coalition of Scholz's center-left Social Democrats (SPD), the Green Party and the neoliberal Free Democrats (FDP) drafted a law stipulating that all personnel who work in care facilities such as hospitals, homes for the elderly and psychiatric clinics must be fully vaccinated by March 15.

The measure passed without much opposition — save for from the far-right Alternative for Germany (AfD) and a few center-right Christian Democrats (CDU) who thought the new government was acting too hastily.

Now, the discussion has turned to whether Germany should adopt a universal vaccine mandate for all eligible residents, as neighboring Austria has introduced, or for people over a certain age and with certain underlying medical conditions, like in Italy.

After speaking out against obligatory vaccination on the campaign trail, Scholz now says he supports the idea of a universal vaccine mandate.

"My view of things is, we have a high vaccination rate, but one that is not high enough" to fight omicron, he told the public broadcaster ARD.

Despite this, no one in any of the governing parties has presented a plan for such a measure, including Health Minister Karl Lauterbach (SPD), who is an epidemiologist and has advocated a mandate of three jabs for all people who are eligible.

German health minister: 'The goal is to stretch out the inevitable'

The AfD has presented a draft to ban further vaccine mandates, which is set to be debated in the federal parliament, the Bundestag, at the end of January. In their draft, they argue that a vaccine mandate would lead to the unvaccinated "losing their constitutional rights … by being excluded from social, cultural, professional, athletic and international life."

A group of 22 FDP lawmakers, led by party vice chair Wolfgang Kubicki, have also drafted a proposal to block widespread vaccine mandates. In his argument against such a policy, Kubicki said: "We could have a different discussion if these vaccines indeed created total immunity, such as those against measles."

Experts, however, have cautioned that the COVID-19 vaccines should not be compared to childhood jabs that offer lifetime immunity and prevent the spread of those viruses. But COVID is different. Like the seasonal flu, the coronavirus mutates, and therefore one shot would never fully protect for a lifetime.

Kubicki speculated that "people like me, over 60, might have to be vaccinated every four months against COVID to maintain the level of protection." 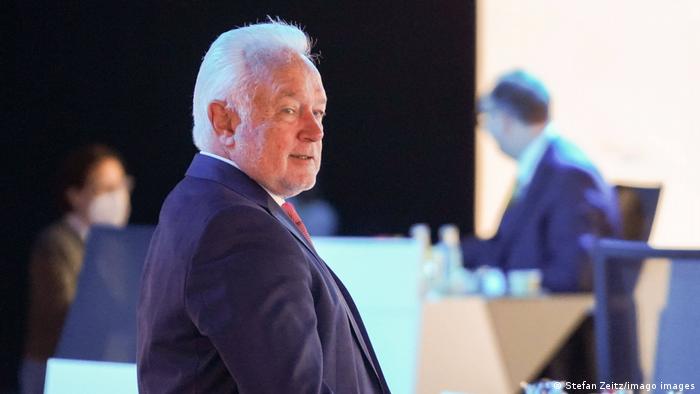 Health officials have by and large declined to engage with the debate over obligatory vaccination. Christian Drosten, the country's most prominent expert on COVID-19, has said that "mandates are a political tool," and not the purview of medical professionals.

Thomas Mertens, the chairman of Germany's independent vaccine commission, STIKO, told the Stuttgarter Zeitung daily that the debate was "dividing society" and that "too much pressure" was building around the issue.

The news magazine Der Spiegel conducted a survey of more than 5,000 people and found that 64% of them support a general vaccine mandate — however, that is a nine-point drop from the previous month.

Though some vaccinated Germans remain against the idea of making the jabs mandatory for the reason of personal choice, complicating the issue is the small but vocal minority of anti-vaccine conspiracy theorists.

Although the number of Germans who deny that COVID-19 exists stands at under 10%, according to the public broadcaster ZDF, the protests against restrictions on unvaccinated people and the prospect of vaccine mandates show no signs of abating.

Many opponents of such a policy cite a statute in Germany's constitution, the Basic Law: It mandates that the government must protect people's health and safety and prohibits the government from interfering with a person's right to make their own choices about what happens to their body.

The Infektionsschutzgesetz (infection protection law) allows state and federal governments to mandate immunization for at-risk parts of the population" against a "contagious disease that presents clinically severe outcomes and when its epidemical spread is expected."

A widespread vaccine mandate would have to walk the line between these two contradictory elements very carefully or risk being thrown out by the courts. This has been the case in the United States, where President Joe Biden's order that large companies mandate vaccines for workers was thrown out by the Supreme Court, citing arguments of government overreach.

Many questions remain unanswered about what a broad vaccine mandate in Germany would look like — whether it would be only for the elderly, for everyone over 18, or include children as young as 12.

Furthermore, there is still no concrete data on how many shots are needed for every age group to maintain immunity, and how often they would have to be administered.

Though Austria has announced a plan to fine unvaccinated people €600 ($684) every three months, there seems to be no clear political will for such penalties in Germany right now.

Unlike other nations, Germany does not have a register of everyone who is vaccinated. In this country that emphasizes data protection, how to systematically identify and penalize the unvaccinated would pose a challenge.

With no proposal for a vaccine mandate in front of the Bundestag, there is still no timeline for its introduction. And considering Germany's reputation for drawn-out bureaucratic procedures, it seems unlikely that there could be a universal vaccine mandate in the country before autumn.

COVID: Will the vaccine mandate deal a blow to medical care in Germany's Saxony?

Saxony's dentists are sounding the alarm: They fear that many clinics will close when compulsory vaccination against COVID-19 becomes mandatory for health professionals in mid-March. Why is that?