COVID: Will the vaccine mandate deal a blow to medical care in Germany′s Saxony? | Germany | News and in-depth reporting from Berlin and beyond | DW | 16.01.2022

COVID: Will the vaccine mandate deal a blow to medical care in Germany's Saxony?

Saxony's dentists are sounding the alarm: They fear that many clinics will close when compulsory vaccination against COVID-19 becomes mandatory for health professionals in mid-March. Why is that? 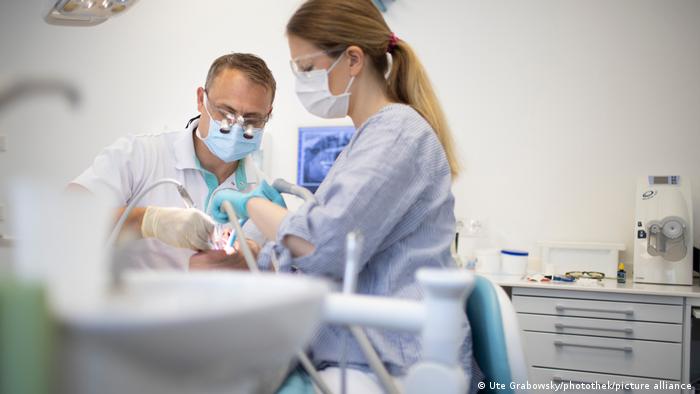 Many dentists in Saxony are skeptical towards a vaccine mandate

It is an incendiary letter that the Association of Dentists in Saxony sent to Premier Michael Kretschmer, the head of the eastern German state: On January 5, the association wrote that it is extremely concerned about what will happen if, as planned, vaccination against coronavirus becomes mandatory for health care professionals throughout Germany. The mandate, which is due to kick in from mid-March, was passed by the Bundestag before Christmas.

The signatories to the letter quote a survey of around 2,600 dental practices in Saxony. Some 490 dentists responded and around 25% of them had not yet been vaccinated; among their surgery staff, the figure is as high as 40%.

Saxony's dentists' association believes that the imminent compulsory vaccination will have a considerable negative impact on medical care in the state: "According to the feedback we get from the professionals in this field, making vaccination mandatory will not generally lead them to all being vaccinated immediately, but rather encourage vaccine skeptics to leave the medical profession and will lead to the closure of practices."

The association argues that dental practices in the eastern German state of about 4 million inhabitants are already overburdened by new administrative requirements. In many regions, dentists are at least 60 years old and say they can hardly cope anymore.

"If an increased migration of staff is now to be expected or the practice owner himself has a negative attitude to the vaccine mandate, there is the danger that these practices will close," the association warned.

Paula Piechotta, a Green party MP in the Bundestag and physician based in Leipzig, Saxony, confirmed in an interview with DW, that dental practices in Saxony are outdated, often lack resources, and are overstretched. Nevertheless, she believes the results of the dental association's survey should not be overestimated. Only a fifth of the state's 2,600 dental practices responded, she pointed out. And that is no valid basis to make conclusions on the vaccination readiness in the entire health service in Saxony. From her experience in hospitals in Saxony's major cities of Leipzig and Dresden, vaccine uptake among medical staff is very high.

"The dentists are simply frustrated with the situation of outpatient care in general," Piechotta concluded. But COVID-19 is indeed exacerbating an already tense situation, she said.

COVID: Germany's nurses and doctors pushed to their limits

Saxony is special in that the vaccination rate there is lower than in any other of Germany's 16 states. According to Germany's public health authority, the Robert Koch Institute, only around 61.7% of Saxony's population is fully vaccinated compared to a national average of 72.5%.

Saxony has also hit the headlines time and again, as vaccination skeptics take to the streets, opposing COVID-19 restrictions and denouncing politicians who promote them.

During previous waves of the pandemic, Saxony reported the highest number of new infections in all of Germany, but that has now changed: The spread of the omicron variant has seen rising infection numbers in the north of the country and the region in and around the German capital, Berlin.

But epidemiologists warn that the currently lower numbers of infections in some other states may be due to lower testing rates, as well as a lag in reporting figures to central authorities. In Saxony, fewer tests are being administered than elsewhere in the country.

Why are COVID case numbers so high in Germany's Saxony? (November 2021)

But why do some health care professionals refuse vaccination? Wolfgang Kreischer, chairman of the association of general practitioners in Berlin and Brandenburg, reports from personal experience. In an interview with DW, Kreischer says: "I know many clinics where everybody working there has been vaccinated; I also know a few practitioners who oppose vaccination and have not vaccinated themselves. With them, there's certainly a bit of fatalism involved."

Nurses, physicians, and staff have been working to their limits during the pandemic, and yet all they hear from politicians are promises, he says. This increases the attitude to simply refuse to listen to politicians, Kreischer suspects. He also cites frustration with former German Health Minister Jens Spahn of the conservative Christian Democratic Union (CDU): "There are many who are turning their backs on nursing. After all, Mr. Spahn promised at the time to bring more than 8,000 more workers into health care. The opposite is the case."

Kreischer says an important argument is missing from the current debate over a general vaccine mandate: It is much too late for it to make a difference, as the omicron variant is proving to be so contagious, he says.

"It doesn't make a difference to the spread of the virus whether everyone is vaccinated or not. You can protect yourself with vaccination from falling seriously ill with COVID-19. But protecting others by being vaccinated is hardly possible anymore because even vaccinated people can transmit the virus variant."

German doctors and their staff have been facing aggression and threats from vaccine opponents. They have described having frayed nerves as pandemic fatigue sets in among patients and medical staff.

It's a tough life for the country doctor

Although Germany has plenty of doctors, there's a shortage of general practitioners willing to work in rural areas. The government wants to help with financial incentives, but money is only part of the problem.