Despite a surge of infections, it remains unlikely that German doctors and nurses will be forced to prioritize care for COVID patients. But pressure is rising at hospitals as space in intensive care beds becomes scarce. 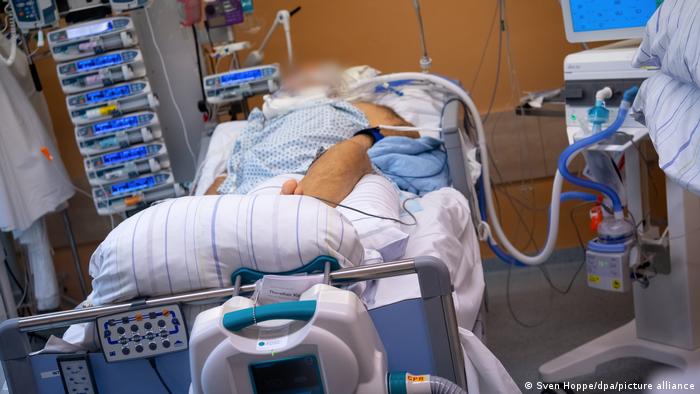 Could Germany soon see COVID-19 and other patients prioritized by their chances of survival, similar to the scenes witnessed in Spain, Italy and France during the first wave of the pandemic last spring?

It's very unlikely, according to the German Interdisciplinary Association for Intensive Care and Emergency Medicine (DIVI) — despite the rising coronavirus infection figures in the country and growing pressure on intensive care units.

"To date, since the beginning of the pandemic, we have not needed to prioritize care for patients, despite the increasing occupancy of intensive care beds," DIVI press spokesman Jochen Albrecht told DW in a statement.

And yet, many German hospitals are stretched to capacity. According to the DIVI Intensive Care Registry, the number of available beds has dwindled from over 30,000 in June 2020 to some 23,900 earlier this week.

Intensive care units are becoming increasingly crowded. As of April 17, 22,539 intensive care beds were occupied across the country, leaving around 12% still vacant. By comparison, at the peak of the second wave on December 16, the proportion of vacant beds was just under 17%.

The main reason for the current lack of capacity is a shortage of qualified health care personnel. Since the beginning of the pandemic in early 2020, around 9,000 nurses have quit the profession. That loss is now acutely felt, even as vaccinations of nursing staff and physicians have increased in recent months.

Despite the tense situation, Germany is still in a relatively good position compared with neighboring countries, at least in terms of the total number of intensive care beds. Back in March 2020, Germany ranked first among 15 EU countries with more than 30 intensive care beds per 100,000 inhabitants, above the average of 13.1 beds, according to a study by private health insurer PKV. By contrast, Portugal has just 4.2 beds per 100,000 inhabitants.

"The good news is that we will be able to care for all patients, and we won't have a situation in Germany where we will have to prioritize one patient over the other," said Christian Karagiannidis, scientific director of the DIVI Intensive Care Registry, in an interview with the Berlin newspaper Tagesspiegel on April 15. "Before that happens, we would switch to absolute emergency mode."

To avoid having to make those difficult triage decisions, hospitals have drawn up emergency plans. This means that all non-essential treatments are put on hold, and patients can be transferred when hospital capacity is stretched to the breaking point.

The plan has been organized following the so-called cloverleaf principle, according to which the 16 German states are divided into five regions. The concept is intended to support overburdened regions and hospitals by allowing groups of patients to be transferred to places with free capacity.

According to the Robert Koch Institute disease control center, this is done "to provide adequate care for every patient, and NEVER to have to prioritize patients, even if there are local bottlenecks." The medical profession, however, has played it safe. A year ago, the Association of the Scientific Medical Societies in Germany (AWMF) developed a guideline that outlined how health care professionals could allocate intensive care resources during the pandemic. Earlier this month, the guideline's validity was extended until October 31.

The guideline stipulates that the likelihood of successful treatment must be considered for each patient. Underlying diseases, age, social aspects and disabilities are not legitimate criteria for a decision to prioritize patients, according to DIVI.

Nevertheless, the guideline has been seen as controversial. "If doctors were to follow the recommendations of the expert associations, many disabled people would have virtually no chance of receiving life-sustaining treatment," said Corinna Rüffer, a German parliamentarian and member of the environmentalist Green Party who has called for the issue to be regulated legally.

Erich Irlstorfer, a member of the conservative Christian Social Union, is backing a pragmatic solution to address bottlenecks. He wants to introduce a law that would better reward overtime work for nursing staff and also provide financial incentives for retired health care staff to return to work.

It's an approach backed by pulmonary physician Christian Karagiannidis. "The nursing staff and the doctors are tired. That's the basic problem," he told Der Tagesspiegel. "That really worries me."