The OSCE has blamed pro-Russian separatists in eastern Ukraine for failing to engage in talks to broker a ceasefire in the conflict. This comes as the EU weighs sanctions against Russia. 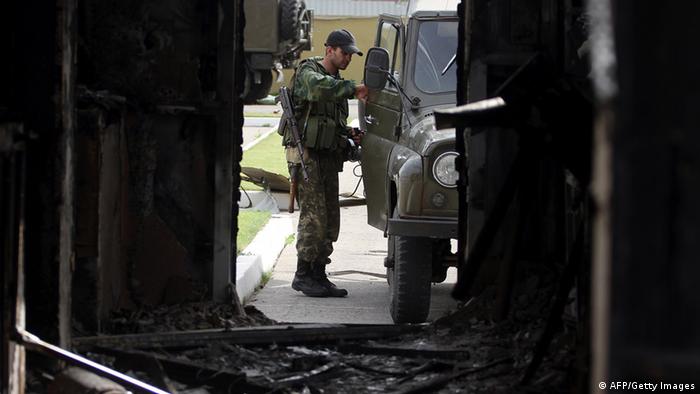 In a statement on behalf of the Trilateral Contact Group (consisting of OSCE, Ukrainian, and Russian representatives) on Wednesday, the Organization for Security and Cooperation in Europe (OSCE) blamed rebel fighters for the collapse of videoconference peace talks that were supposed to be held on Tuesday. The group's statement said that a "lack of willingness on the side of the separatists to engage in substantive talks on a mutually agreed ceasefire" was behind the cancellation.

The Trilateral Contact Group says that a ceasefire would need to include OSCE observation that the truce was being maintained, the implementation of effective border monitoring, the release of all hostages, and the start of inclusive dialogue.

Following an invitation from Moscow on Monday, OSCE observers were set to begin monitoring border crossings between Ukraine and Russia on Wednesday.

Despite this concession from Russia, it appears likely that the West will go ahead with harsher sanctions against Moscow. Later on Wednesday, leaders from European Union countries are set to meet in Brussels to debate imposing sanctions against Russia.

On Wednesday, German Chancellor Angela Merkel's spokesman Steffen Seibert told reporters "Russia has been insufficient in meeting expectations" regarding their efforts to de-escalate the situation.

The US hopes to align with the EU on fresh sanctions, but has said it might go it alone if the EU is not willing to ruffle feathers in Russia, a country with strong economic ties to the EU.

In a telephone conversation between US Vice President Joe Biden and Ukrainian President Petro Poroshenko, Biden told Poroshenko "that the United States was engaging with European leaders to discuss the imposition of costs on Russia for its continued escalation of the conflict."

US President Barack Obama and Merkel also spoke on the phone on Tuesday#. The White House released a statement saying the two leaders were in agreement "that Russia must take immediate steps to de-escalate the situation in eastern Ukraine amid the ongoing violence there."