Nominations for the Oscars have been revealed in Los Angeles. "La La Land," "Moonlight" and "Manchester by the Sea" are well represented - as is a German comedy. The awards will be presented on February 26.

The Academy Award nominations for best picture include the family drama "Manchester by the Sea," wartime biopic "Hacksaw Ridge," directed by Mel Gibson, and the musical romance "La La Land," starring Ryan Gosling and Emma Stone. Other nominations in this coveted category include "Lion," "Moonlight," "Hidden Figures," "Hell or High Water," "Fences," and "Arrival." The winner will be revealed at the awards ceremony held on February 26, which will be hosted by US comedian and late night talk show host Jimmy Kimmel. 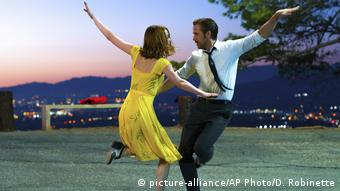 "La La Land" is considered a frontrunner for a number of awards that night, after reaping 14 nominations and having won a record seven Golden Globes including best musical or comedy earlier in January. Movie stars Emma Stone and Ryan Gosling were also nominated for best actor and best actress in "La La Land," respectively. The musical about the downsides of showbiz is also a frontrunner in several categories for the British Academy Film Awards (BAFTAs) to be held on February 14.

Germany meanwhile also received a nomination for "Toni Erdmann" in the foreign language film category after competing against 85 other nations; the family comedy by Maren Ade had attracted a great deal of international attention in the past year at a number of other festivals already and was considered one of the favorites in that category. The German production will now compete against "Land of Mine" from Denmark, "A Man Called Ove" from Sweden, "The Salesman" from Iran, and "Tanna" from Australia.

The best of the best

Nominated for the award for best actor in a motion picture were Casey Affleck for his role in "Manchester by the Sea," Andrew Garfield in "Hacksaw Ridge," Ryan Gosling in "La La Land," Vigo Mortensen in "Captain Fantastic" and Denzel Washington in "Fences." The nominees for best actress include Isabelle Huppert in "Elle," Ruth Negga in "Loving," Natalie Portman in "Jackie," Emma Stone in "La La Land," and Meryl Streep in" Florence Foster Jenkins." 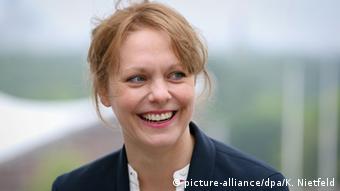 Nominated for the award for supporting actress were Viola Davis in "Fences," Naomie Harris in "Moonlight," Nicole Kidman in "Lion," Octavia Spencer in "Hidden Figures," Michelle Williams in "Manchester by the Sea."

The nominees for best supporting actor include Mahershala Ali in "Moonlight," Jeff Bridges in "Hell or High Water," Lucas Hedges in "Manchester by the Sea," Dev Patel in "Lion," and Michael Shannon in "Nocturnal Animals."

The woman behind #OscarsSoWhite

The Oscars attracted criticism in the recent past following two straight years of largely featuring white acting nominees and sparking the #OscarsSoWhite social media campaign. After an overhaul of the motion picture academy, which saw almost 700 new members added to diversify its make-up, organizers hope the event will take a different direction this year.

The opening clip of the live nomination broadcast included various actors of color including Jennifer Hudson and Ken Watanabe, taking a more contemporary approach to the traditional nominations ceremony with the live YouTube video. Several nominees of color also underscored the impression that the Academy of Motion Picture Arts and Sciences hopes to diversify its image.

The Oscars appeared to try aim for change in other areas as well. The nominations for best documentary for instance include a number of critical works tackling social issues including "Fire at Sea," "I am not your Negro," "Life, Animated," "OJ: Made in America," and "13th."

The downside of the films industry

Earlier this week, the so-called Golden Raspberry Awards nominees were also announced. The 37th edition of the somewhat lighthearted awards ceremony will be held on February 25 - one night before the Academy Awards, "celebrating" the worst movies and performances of the past year.

The nominations for the worst movie include "Batman v Superman: Dawn of Justice," "Dirty Grandpa," "Gods of Egypt," "Independence Day: Resurgence," "Zoolander 2," and "Hillary's America: The Secret History of the Democratic Party." 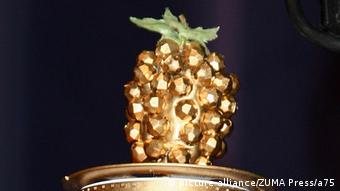 Interestingly, the same set of movies bar one ("Independence Day: Resurgence") are also featured in the list of nominations for the worst actor: Robert DeNiro in "Dirty Grandpa," Gerard Butler in "Gods of Egypt," Ben Stiller in "Zoolander 2," Dinesh D'Souza in "Hillary's America: The Secret History of the Democratic Party," and both Ben Affleck's and Henry Cavill's performances in "Batman v Superman: Dawn of Justice."

Meanwhile the nominees for the worst actress are: Megan Fox in "Teenage Mutant Ninja Turtles: Out of the Shadows," Tyler Perry in "Boo! A Madea Halloween," Julia Roberts in "Mother's Day," Rebekah Turner in "Hillary's America: The Secret History of the Democratic Party," and both Naomi Watts and Shailene Woodley in "The Divergent Series: Allegiant."

When the Oscars are handed out on February 26, one of these films will take home the coveted trophy for best picture. Did you favorite movie make the shortlist? (24.01.2017)