Opposition in Lebanon forms coalition against sectarianism after Beirut blast | Middle East | News and analysis of events in the Arab world | DW | 31.08.2020

Opposition in Lebanon forms coalition against sectarianism after Beirut blast

Anger at Lebanon's political class has galvanized a coalition opposed to the sectarian system of government. Some pledges appear achievable, but toppling the establishment will likely prove beyond tough. 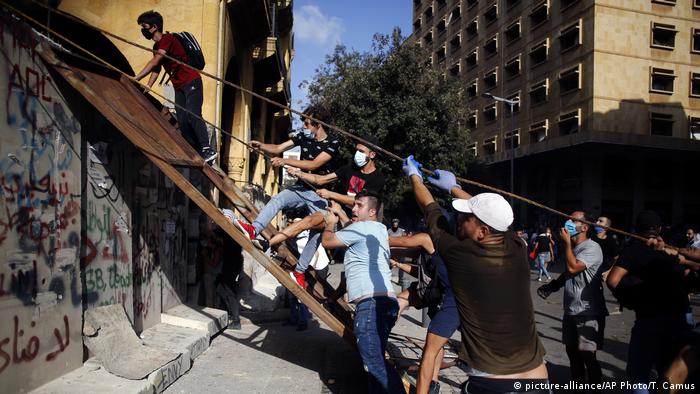 On Sunday, dozens of civic groups and former opposition parties announced a unified program to establish a new political system in Lebanon while rejecting the new nominee for prime minister, Mustapha Adib, who is currently the ambassador to Germany. Speakers reading the group's declaration on Martyrs' Square in Beirut said the ruling class "had insisted on reproducing itself despite losing popular legitimacy," and blamed the multiple deep problems that the country faces on the "greed" of the political system.

Since widespread protests erupted in October 2019, opposition groups had struggled to find a common goal and project unity. "For a long time, they were lost," Zeinab Mirza, a political scientist at the American University of Beirut, told DW. "That's why they had no voice. So, this is a very important document."

Key to the groups' demands is a slimmed-down transitional government with a clear timeline to abolish Lebanon's sectarian system and a rejection of any Cabinet formed under the status quo. The current laws divvy key political posts among the country's main religious faiths, but many consider this a corrupt setup that channels patronage and influence.

Former Prime Minister Hassan Diab stepped down on August 10 amid nationwide fury after the August 4 explosion in Beirut. Opposition groups have been meeting intensively since the blast to draw up a list of figures who could form a competent and independent transition government.

"We have names," Hassan Sinno, a member of the Massirat Watan opposition movement, told the AFP news agency. "We are ready."

The declaration document includes 58 detailed political goals — ranging from gaining compensation and justice for victims of the blast to getting rid of electoral laws based on sect and formalizing the independence of the judiciary. Amin Qamourieh, a political analyst and columnist for the Lebanese daily An-Nahar, told DW that the initiative, which brings together a diverse range of groups with a powerful common vision, is the movement's most significant achievement.

"The announcement represents the basic level of understanding that is needed to end the chaos that is being exploited by those in power, as well as foreign forces that say they will adopt reform but are only looking out for their own interests," Qamourieh said.

The coalition is not alone in calling for changing the way things are done in Lebanon, but analysts say that the group will, at least initially, have to work within the existing system. "The youth of the movement realize that the attempts to uproot sectarianism and external influence are very difficult," Qamourieh said, "so they initially seek to achieve gains, such as running in elections with unified groups that allow new voices to arrive in Parliament to allow bills to be submitted.

Because of the depth of anger felt across Lebanon following the blast, the political will to deliver on some of the demands exists, Mirza said, but overhauling the confessional system will be difficult. An independent domestic investigation into the explosion, a progressive tax system, transparent bidding for government contracts and housing for people affected by the blast are all possible, she added. They would, however, require accepting a new government with some technocratic and political experience.

"This isn't nuclear science," Mirza said. "But abolishing the sectarian system is not as easy," she added. "It can be done and should be done — but we have more pressing priorities now."

On Monday, Parliament Speaker Nabih Berri said there "must be a change to this confessional system, which is the cause of all ills." On Sunday, President Michel Aoun called for the proclamation of a secular state and acknowledged a need to "change the system."

Aoun's ally, the Iran-backed Hezbollah leader, Hassan Nasrallah, had said earlier Sunday that he was open to French President Emmanuel Macron's proposal for a new political pact — providing that Lebanon's factions agree. Days before he headed to Beirut to celebrate Lebanon's 100th anniversary as a country on Monday, Macron had warned that the nation could "disappear" without swift action from those in power.

Macron's two-page "concept paper" outlines changes needed to unlock foreign aid, such as an audit of the central bank and the installation of an interim government capable of implementing his proposals and calling early elections. France, the United States, Israel, Saudi Arabia, Syria and Iran have all long influenced Lebanese politics through support for their preferred leaders and factions.

But Qamourieh said foreign powers had only sought to maintain the status quo in Lebanon. "These forces are looking for a possible formula for the continuation of sectarianism that serves their interests," he said.

Pope Francis in Greece highlights plight of migrants and refugees

Opinion: Who decides that omicron is a 'South African' variant?