Opposing apartheid from behind the Berlin Wall | Germany| News and in-depth reporting from Berlin and beyond | DW | 15.12.2013

Opposing apartheid from behind the Berlin Wall

East Germany and the African National Congress shared a special bond: not only the government, but also the public in the communist state supported the anti-apartheid movement in South Africa. 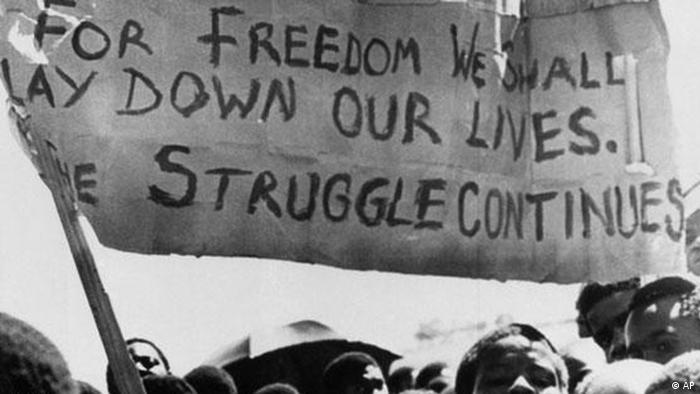 Heavily armed police forces pushing along black children and teenagers, beating them with clubs, shooting with live ammunition. The disturbing images of the Soweto Uprising shocked the world in June of 1976.

Some 15,000 students in the South African township protested against a new rule that said they'd only be able to take exams in Afrikaans, the language of most white South Africans. They accused the apartheid regime of massively limiting their access to education.

Authorities said 575 people died in the dispute, but the protesters themselves said the number of victims was much higher. Years of unrest followed and led to international protest.

For Christine Müller from Leipzig, then in communist East Germany, the Soweto uprising was a "defining moment." She still remembers the effect the pictures had on her. "This rage enveloped me, because I felt so helpless," Müller told DW. "I thought that we needed to do something immediately." 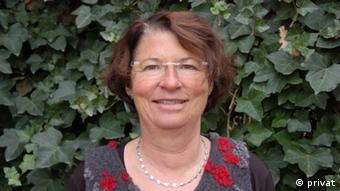 She researched the topic and looked for fellow supporters. For decades, she worked in church groups that advocated solidarity with the anti-apartheid movement. Today, Müller is the head of the "One World" working group at the Protestant Church of Saxony. For Müller, her involvement is an expression of her Christian faith.

"'Apartheid' means exclusion," she said. "And that's not just about the victims of racism in South Africa, but more generally about the excluded, who don't get a piece of the pie when it comes to wealth and power."

Involuntary union of church and state

In East Germany, the Protestant church was a main source of political opposition. But the authoritarian government was also involved in the fight against apartheid. That made for an unusual alliance.

The communist leadership in East Berlin described its support for liberation movements as anti-imperialistic solidarity. But East Germany also had pragmatic goals at heart: the government wanted to raise its country's profile on the world stage. Until the 1970s, it lacked diplomatic ties to western nations because democratic West Germany regarded itself as the only legitimate successor state to the wartime regime. West Germany's Hallstein Doctrine of 1955 considered it an "unfriendly act" when other countries established diplomatic relations with the East.

Together with the US and Britain, West Germany was among the countries with the strongest ties to the apartheid regime in Pretoria. The West German Protestant church (EKD) was largely mute on the issue. Support for the African National Congress (ANC) and its imprisoned member Nelson Mandela tended to come from leftist groups. That led to angry disputes within the church. 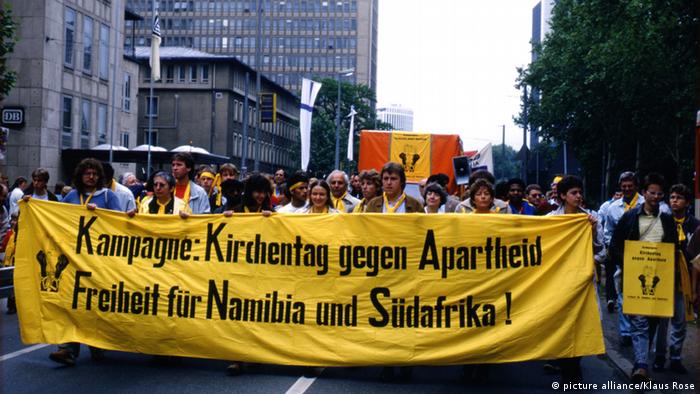 In contrast, the East German government generally regarded any independent social movements as a threat. That didn't make the anti-apartheid efforts of grassroots groups, or of the East German government, any less worthy, historian Ilona Schleicher said. In the face of the situation in Soweto and other examples of brutal violence against blacks, political persuasion and worldview weren't of any importance, she said: "Every human being, no matter whether they oppose their state or not, reacts the same to those pictures if they're really human: with compassion, solidarity and the desire to help."

Fighting for democracy under communism

But the lack of democracy in East Germany cast a shadow over its anti-apartheid stance, Schleicher said: "They were fighting for something they didn't have in their own country." She experienced the anti-apartheid movement as the wife of an East German diplomat in southern Africa. That influenced her stance. "As a working-class child, I grew up with the promises of socialism," Schleicher told DW. "For me, everything in East Germany looked right. The realization that many things were not in fact right in our country only came to me much later, and also because of the experiences we had abroad." 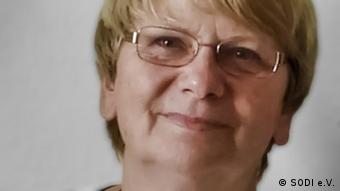 On the ground in South Africa, she saw that the liberation fighters didn't care about who helped them or what their motivation was. "What counted was the actual support." The ANC profited from East German support in various ways. Instructors and teachers worked in ANC training centers in Tanzania and universities in East Germany accepted black South African students. To make this possible, the official Solidarity Committee collected donations in the population.

When the ANC began using violence against its oppressors in the 1960s, East Germany continued to support it. The Solidarity Committee sent paramilitary equipment including camouflage fabric, binoculars and rubber boats. And instructors trained more than 1,000 resistance fighters in Africa, but also in a secret military camp in the East German village of Teterow.

At the same time in West Germany, companies like Daimler-Benz, Siemens and Deutsche Bank invested in South Africa, and thus provided a form of support to the apartheid regime and its violations of human rights - knowing that they had the West German government on their side.

ANC supporters in the East did experience a crisis of conscience, Müller said: "That was the problem for many of my fellow Christians who said 'We can't support our government's anti-imperialistic politics.'" That's why she was even happier when the apartheid laws were abandoned in 1990, the year East Germany itself ceased to exist, and in 1994, when Nelson Mandela was elected as the first black president. Müller said that was a nice affirmation for her efforts, even though things are far from perfect in South Africa.