Israel captured the area in the 1967 Six-Day War and formally annexed them in 1981. Now US President Donald Trump intends to defy the international community by accepting the claim — a grave mistake, says Rainer Sollich. 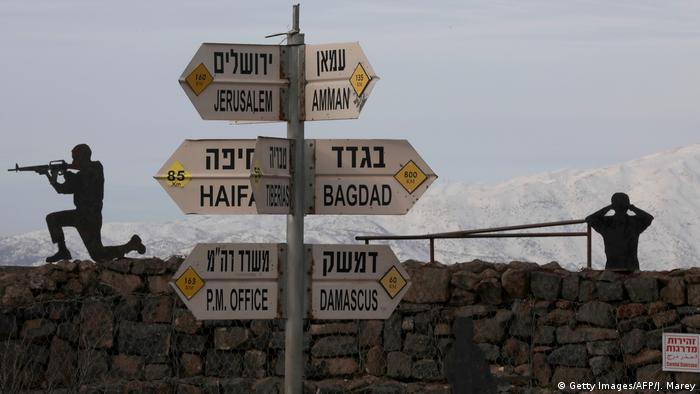 One could be tempted to look at the move in a positive light and say: We finally have a US president who is willing to leave the trodden path of established Middle East diplomacy. A president who bravely embarks on a new path rather than continue along the ineffective one established by UN resolutions, one which has led to no real political solution for decades. One must also admit that Donald Trump is right about one thing: Israel's control of the Golan Heights is a fact. And that fact will not change any time soon — perhaps never. So why shouldn't one simply accept reality? Doesn't the quest for a realistic political solution have to start with a blunt assessment of realities on the ground?

Unfortunately, things aren't that simple. It is possible that Trump's battering-ram style may very well lead to unexpected successes when it comes to North Korea and China. But his intention to recognize Israel's illegal annexation of Syria's Golan Heights is in another category altogether. For Trump has now shown his willingness to call international law into question and pour fuel on the many fires raging across the Middle East — just to give his ally, Israeli Prime Minister Benjamin Netanyahu, an election present. No one who recognizes Israel's 1981 annexation of the Golan Heights will ever be able to credibly condemn Russia's annexation of Crimea. Thus, the US would seem to be giving its blessing to this breach of international law.

The regional implications are dangerous as well: Much as he did in 2017 by unilaterally recognizing Jerusalem as the capital of Israel — against the will of Palestinians and the great majority of UN member states — Trump has once again taken Israel's side, to the benefit of Netanyahu and the detriment of the Arab world. In doing so, he is doing more than aligning his political opponents in Syria, Iran and Hezbollah against the United States. He is also strengthening those opponents by further feeding their already successful anti-American and anti-Israeli propaganda. As most people in the region will see it, Trump is again betraying and selling out the interests of Arabs and Muslims.

Trump is also needlessly weakening his Arab and Muslim allies in the region. The Gulf States have already voiced disappointment in Trump's announcement and emphasized that the Golan remains Syrian. Washington's partner Egypt expressed itself similarly. Syrian opposition forces allied with the USA will likewise find it impossible to concede the forfeiture of national territory; it would be political suicide.

One may suppose that rulers in Cairo and Riyadh care just as little about the Golan Heights as they do about the fate of Palestinians in Gaza — they have other priorities now, namely, stemming Iranian influence in the region. Still, Arab potentates will be even less able to credibly sell the idea of working with the United States and Israel to create a "new" Middle East than ever before. That is because Trump's new shift on Golan will force them to bow to the anti-American rhetoric on the "Arab street." That regional reality, too, is something that can never be ignored. Thus, Trump's Golan initiative is not only dangerous; when viewed against the backdrop of his own interests and plans for the region, it is simply ignorant and counterproductive.

A statement by President Donald Trump that the US should recognize Israeli sovereignty over the Golan Heights is likely to stir tensions. Europe alongside Russia, Syria and Iran warned against any unilateral moves. (22.03.2019)