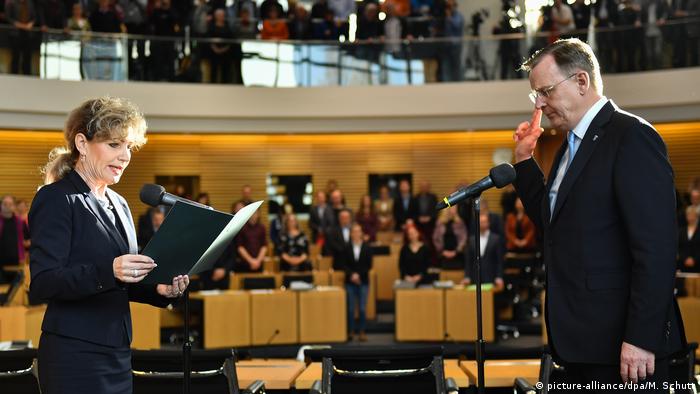 Thuringia, a small east German state with just 2.1 million inhabitants, once more has the premier it deserves: Bodo Ramelow.

Ramelow, a former trade union official who grew up in western Germany, is the only Left party lawmaker to serve as the premier of a state in reunified Germany. He has been Thuringia's state premier since 2014 and, until recently, governed with a slim majority. Ramelow has made a name for himself with his calm, undogmatic leadership style.

His conduct has helped debunk many myths surrounding his party, which emerged out of the Socialist Unity Party of Germany (SED) that ruled communist East Germany and carried out human rights abuses, economic mismanagement and the infringement of personal liberties. Ramelow, meanwhile, dispelled many peoples' fears after taking office in 2014, when he proved himself to be an even-handed and pragmatic leader.

Ramelow's style earned him respect across the political spectrum. But when his coalition — made up of his own Left party, the Social Democrats (SPD) and Greens — lost its slim majority after the October 2019 state elections, Ramelow found himself reliant on other parties to be re-elected as state premier. Instead of backing him, the Christian Democrats (CDU), business-friendly Free Democratic Party (FDP) and far-right populist Alternative for Germany (AfD) voted to put FDP candidate Thomas Kemmerich into office.

That the CDU and FDP would join forces with the AfD — a party with an openly right-wing extremist faction in Thuringia — sent political shock waves through Germany. How could this happen? One explanation is that the CDU in 2018 decided to rule out any form of cooperation with the Left party – and the AfD.

Both parties, the CDU and FDP, were so blinded by ideology and their aversion to the Left party that they walked into AfD's trap of unwittingly voting with them to elect Kemmerich. Their disgraceful cooperation with the AfD inflicted serious harm on Germany's political culture  — and tarnished their own image. Everyone will now remember them as the parties that sold their soul just to get rid of a left-wing state premier. Since that day, both parties' approval ratings have been falling, and rightly so.

Thuringia's CDU appears to have learned its lesson from the ordeal. The party has now made it possible for Ramelow to be re-elected after all. He won in the third round, which required a simple majority, with CDU lawmakers abstaining.

Unlike the CDU, FDP lawmakers seem to have learned nothing from their mistakes. All five FDP lawmakers boycotted the election, saying they could support neither left-wing Ramelow, nor AfD candidate Björn Höcke, who at the last moment announced his candidacy. The FDP's embarrassing protest failed to make up for their blunder and follow the CDU's lead.

The AfD, as expected, set out to ignite another political flashpoint. It succeeded in doing so when it helped get Kemmerich elected in February. But this time around, it fortunately failed. Granted, they were entitled to field Höcke as a candidate, and may have hoped that some CDU lawmakers would actually back him — a move that would have gained them a small, albeit unjust, political victory. But luckily, this did not happen.

We can all, therefore, breathe a sigh of relief. But Ramelow's re-election will only repair some of the political damage wreaked by the AfD debacle. He now heads a minority government, comprising his own party, the SPD and Greens, and must rely on the CDU and FDP for votes. Only time will tell if this is a viable model. All parties must act responsibly from now on. The state elections are in April 2021 — and much can still happen until then.