Four parties have agreed to fresh election dates in the German state of Thuringia. The state drew major controversy after a state premier was elected with the help of the far-right AfD party. 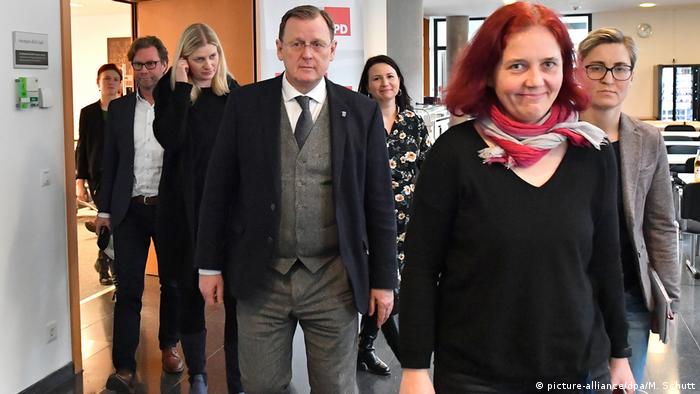 The parliament of the eastern German state of Thuringia will choose a new state premier in early March, a month after the parliamentary vote that elected the last one, with the help of a far-right party, caused a major political scandal in the country.

Four political parties reached a breakthrough in negotiations on Friday, agreeing to hold a new parliamentary vote for state premier on March 4, and another state election on April 25, 2021.

The socialist Left Party, which represents the biggest faction in the parliament, agreed the timetable with the center-left Social Democrats (SPD), the Greens, and the conservative Christian Democratic Union (CDU) in a meeting in the state capital Erfurt.

The new elections are intended to bring an end to Thuringia's political crisis, which was triggered when the pro-businessFree Democratic Party's (FDP) Thomas Kemmerich was elected as state premier with the backing of the CDU and the far-right Alternative for Germany (AfD) — violating a political taboo in the country against cooperating with the far-right.

The four parties also agreed to a stability pact in order to prevent the AfD from being able to play kingmaker in the next government.

The agreement represents a climbdown for the conservative CDU, who refused to vote for the Left party's Bodo Ramelow, the then-incumbent state premier, in the vote in early February.

The four parties will now back Ramelow as their candidate in the upcoming vote in March. Ramelow will then head an interim government until Thuringians elect a new parliament next year.

Ramelow's government will represent a continuation of the red-red-green coalition, made up of the Left Party, the SPD, and the Greens, that he has led since 2014, though this time with no majority in parliament. He intends to leave the agreement of a state budget until next year.

Deputy leader of the state CDU party, Mario Voigt, said his party would play the role of "constructive opposition" next year. "These are exceptional circumstances. We must solve the crisis together," he said.

Green party spokesperson Ann-Sophie Bohm-Eisenbrandt wrote on Twitter: "Now hopefully there will be plain sailing ahead for Thuringia."

The election in Thuringia rocked the German political world and resulted in several politicians stepping down from their posts.

The freshly elected Kemmerich resigned as premier "effective immediately" just three days after the election, while CDU party leader Annegret Kramp-Karrenbauer — German Chancellor Angela Merkel's chosen successor  — announced that she would not run for chancellor in elections to be held in 2021. In Thuringia, CDU state party leader Mike Mohring also stepped down.

Roderich Kiesewetter, a leading Christian Democrat, acknowledged on DW's Conflict Zone that his party made mistakes following the scandal in Thuringia that rocked Germany. (19.02.2020)

Thuringia's controversial election pact and Dresden's day of remembrance have stirred memories of Germany's Nazi past. Thousands of protesters took to the streets of Dresden and Erfurt for marches against the far right. (15.02.2020)