Americans have decided George Bush is the best man for the helm of the world's only superpower in these difficult times. While he may be the pick of US voters, the world, unfortunately, deserves better. 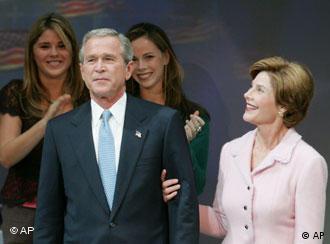 Will he be as divisive during his second term?

In a democracy, it has often been said, the people get the government they deserve. After a bitter and divisive election, America has handed George Bush the popular mandate for the presidency he failed to get four years ago. To many non-Americans, that means US voters have now accepted the man, as well as the consequences of his often extremely polarizing actions.

The United States may prefer Bush, but it's no secret most of the world's population would have rather seen John Kerry in the White House. Many around the globe had taken hope from Kerry's promise to move away from Bush's "arrogant" foreign policy. That hope is, of course, now gone.

The botched war in Iraq has left America's reputation in tatters in many parts of the world. It will be a long road to regain the trust of those who once looked up to the United States. But sadly, there is little to suggest a second Bush term will be more conciliatory than the first.

There is a clear danger that the strong antipathy many foreigners have for Bush will now be foisted upon the United States at large. Those that peddle anti-Americanism can simply equate the leader and his unpopular policies with the entire country. Others who normally would reject such rhetoric may simply let it slide, assuming the American electorate had the chance to reject the Bush administration's radically unilateralist course.

On a number of issues, Bush's stance has irked America's friends and allies overseas. Though none of Washington's partners expected the president to neglect America's interests on the world stage, he has often shown little respect for the opinions of other nations.

Instead of accepting modest constraints on the United States' unprecedented power to lead by example, Bush has repeatedly chosen to push a course to Washington's liking, regardless of the consequences. Or American leadership has simply been glaringly absent on matters such as human rights, free trade and the Middle East peace process.

Unfortunately, the world cannot simply ignore the United States and let Bush go his own way. His utter disregard for working globally on environmental concerns such as global warming and respecting international law poses a threat to all nations.

Much to the glee of many arch-conservatives in America and to the chagrin of most Europeans, a second term for the Texan will put both the Kyoto Treaty on global warming and the new International Criminal Court in jeopardy. The United Nations is also likely to remain sidelined at a time when greater cooperation is needed to counter the dangers of international terrorism and nuclear proliferation.

America under Bush may yet decide more can be achieved through greater cooperation instead of confrontation. But if it doesn't, at some point there is sure to be a backlash. Without goodwill from the rest of the world, it is untenable that a nation with less than five percent of the planet's population uses the most energy and emits the most greenhouse gases.

The United States cannot solely depend on its unmatched military and economic might, unless it intends to rule by fear. And the world may not like Bush, but it must work with Washington to make progress on vital global issues important to all of us.

The Race for the White House

Read DW-WORLD's coverage of the US election.