The refugee crisis in Southeast Asia has its origin in Myanmar. Many people say that a statement by Myanmar's human rights icon Suu Kyi is thus long overdue. But it is not easy for Suu Kyi, says DW's Rodion Ebbighausen. 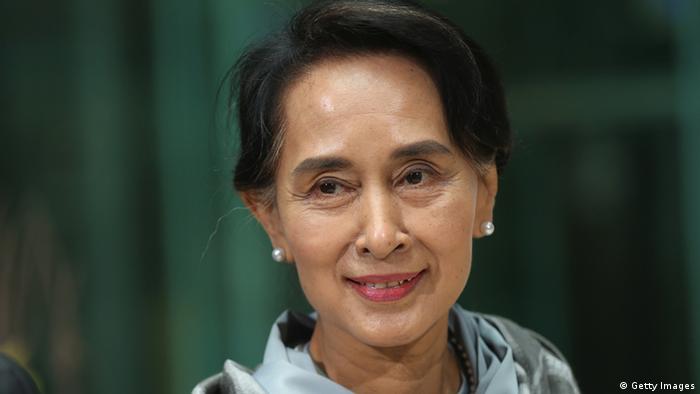 The calls are getting louder for Myanmar's Nobel peace laureate Aung San Suu Kyi's to respond to the current refugee crisis involving her country's marginalized Rohingya Muslims. Human rights organizations, including Human Rights Watch, say that Suu Kyi's silence on the unfolding Rohingya issue is unjustifiable and wrong. Even the Dalai Lama urged Myanmar's democracy icon to raise the refugee issue in an interview with The Australian newspaper on May 28, 2015.

But Suu Kyi has persistently maintained silence on the conflict. Thus far, only Nyan Win, a spokesman for Suu Kyi's National League for Democracy (NLD) party, has commented on the crisis. Win said that the Rohingyas were entitled to human rights but not the country's citizenship until they met the requirements of the law. The stance has been criticized by rights groups, which say that it makes life in Myanmar impossible for the Rohingyas and leaves them with the only option of fleeing the country by sea.

Many suspect that Suu Kyi has kept silence due to electoral reasons. Myanmar is holding the parliamentary elections end of this year, and Suu Kyi and her NLD party have a good chance of victory. Critics, thus, accuse Suu Kyi of opportunism.

But the political situation in Myanmar is complex. The majority of the Buddhist population is against citizenship rights for the Rohingyas. They call them "Bengalis" – the children of illegal immigrants from neighboring Bangladesh. There has also been massive propaganda in the country not only against the Rohingyas but also against all Muslims.

In 2012, the tensions between Buddhists and Muslims flared up, triggering riots which claimed at least 200 lives and displaced more than 100,000 people. A report by a commission of inquiry, set up by the government after the riots, concluded that both sides were not prepared to coexist peacefully.

The situation hasn't changed; in fact, it has taken a worse turn. The upcoming elections have aggravated the dynamics, and it is uncertain whether Myanmar will continue with the democratization process. Sectarian unrest could provide the country's powerful military an opportunity to intervene and take direct control of the state affairs once again.

Aung San Suu Kyi faces a dilemma. As a human rights icon - as she is known internationally, and also in the West - it is her duty to raise voice in support of the Rohingyas' plight and denounce the acts by the government and the majority Buddhists, and also by instigators in the Rohingyas' camps. But there is a risk that the situation could once again get worse - nationwide protests and riots could restart.

On the other hand, Suu Kyi's silence does discredit what she has been advocating since 1988: democracy and human rights. Suu Kyi and the NLD are likely to win parliamentary elections but then they at least have to prove that they did not act out of opportunism. She and her party must take concrete measures to make sure that the Rohingya issue is put in perspective in their homeland, Myanmar.

A three-day security conference will be held in Singapore on May 29. German Defense Minister Ursula von der Leyen will attend the meeting to discuss the most pressing issues that East and Southeast Asia are facing. (28.05.2015)

Thailand has been under strict military rule for one year. The regime controls all aspects of state affairs and allows no dissent. We can't ignore this, and must confront the dictatorship, says DW's Rodion Ebbighausen. (20.05.2015)

Southeast Asia's refugee crisis had been looming for some time. Still, the countries in the region failed to act. DW's Rodion Ebbighausen says a common approach is urgently needed. (15.05.2015)