Despite the Christian Democrats' clear victory in Saxony state elections, the CDU has a real problem. The conservatives now have competition on their right, and that's a problem, writes DW's Volker Wagener. 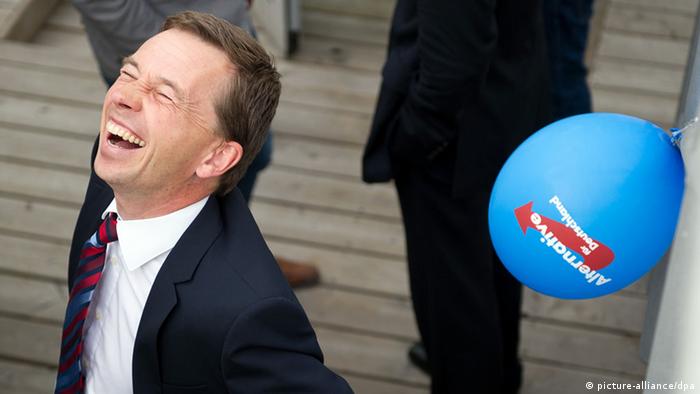 The specter is back, hovering on the right. Almost 10 percent of the Saxon electorate voted for a party with a seemingly innocuous name, "Alternative for Germany" (AfD), giving it its first spot in a state parliament.

The AfD, however, gained its popularity with anti-EU slogans, tougher asylum policy suggestions, and pledges to crack down harder on crime. And let's not forget its "softer" demands, themselves hardly cosmoplitan, such as the call for more German-language songs on the radio.

The AfD's manifesto is the stuff of right-wing populism. And it's working. But still, a party like this, which many critics place just left of being unconstitutional in Germany, can only have success like it did in Saxony if just half of the electorate shows up at the polls. On Sunday, turnout was a paltry 48 percent.

Merkel's conservative Christian Democratic Union (CDU), Germany's strongest party, is thus facing a familiar problem of old: voters are dipping their toes into waters to the right of the German political mother ship. When combined with with the NPD - Germany's extreme far-right party, which nearly cleared the 5-percent parliamentary hurdle itself on Sunday - around 15 percent of Saxony's voters are now more conservative than Germany's conservative union. The CDU and its Bavarian sister party, the Christian Social Union (CSU), have always wanted to prevent that!

'The only thing right of us is the wall'

"No legitimate political party can be right of the CSU," said the legendary Franz-Josef Strauss in his campaign for the state election in Bavaria in 1986. Strauss and his CSU, which is effectively the Bavarian wing of the CDU, thus sought to mark its parliamentary territory - on the very right edge of the political body.

For historical reasons we don't have to repeat here, that was the way German conservatives wanted it. And then, just before the Berlin Wall fell, the unthinkable happened: right-wing "Republicans" made it into the European Parliament with 7 percent of the vote. For years, the conservative alliance had to live with competition on its right, competition that was being monitored by Germany's domestic secret services - for fear it was up to no good.

The AfD and their roughly 10 percent in Saxony have Germany's conservatives jittering again, following the former's success at European elections in May and their oh-so-close attempt to gain entrance to the Bundestag at general elections last September.

With Merkel at the helm, the conservative ship has ventured so close to the political middle that many conservatives don't know who they are anymore - that is to say, they don't know what's conservative. Many feel their label has been betrayed. Sacrificed for the mainstream, sacrificed for votes. It's no big surprise, then, that the descendents of such staunch conservatives are emerging in the AfD's ranks.

Saxony: one of a kind?

The Saxony election has put the AfD on the domestic political stage now too. From a rational perspective, its 10 percent and the almost 5 percent for the NPD are tough to grasp. Of all five federal states in the east, Saxony is the most prosperous. Economically speaking, the state is doing well, and the percentage of foreigners living there is only around 3 percent of the population.

There should be no reason for xenophobia or any fear of social disarray. And yet the rhetoric of the NPD and the AfD were able to attract a significant portion of the electorate. If this trend continues at upcoming state elections in neighboring Thuringia and in Brandenburg to the north, then Merkel and her conservatives are going to have to strap on their boots.

Silence and ignorance can no longer be the answer. Why not go on the offensive and offer a coalition proposal? Faced with the burden of government, any party will have to show its true colors - and perhaps be uncloaked as incapable polemics. Perhaps all within one legislative period?

You don't have to be a Social Democrat supporter to bemoan the anemia plaguing the SPD in its very motherland. For it was in 1863 that Ferdinand Lassalle founded the "Allgemeiner Deutscher Arbeiterverein" (General German Worker's Organization), which would later become the SPD, in Leipzig in Saxony.

On Sunday, the Social Democrats made a gain of just 2 percent compared with the last election. Now they have 12 percent support in Saxony - and they were celebrating this! Some 3 percent less than the aggregate score of the NPD and AfD. Now that's the stuff of specters.