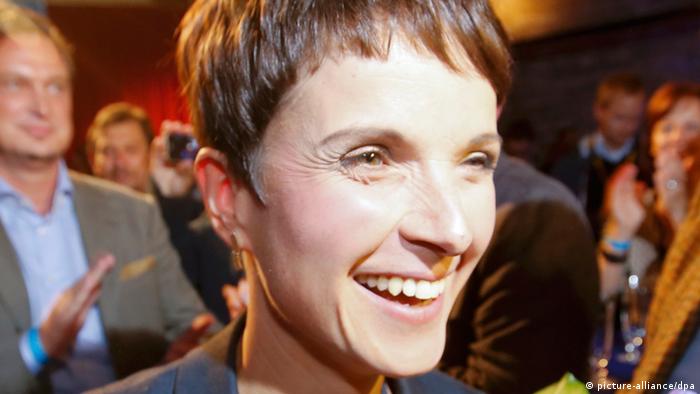 Preliminary results show that as predicted, Chancellor Angela Merkel's incumbent conservative Christian Democrats (CDU) won Saturday's state election in Saxony, receiving 39 percent of the votes and up to 59 of the 132 seats.

This means Premier Stanislaw Tillich will continue to govern, but will need to seek out a new coalition partner, with the liberal FDP party receiving only 3.7 percent of the votes - failing to clear the 5 percent hurdle required for parliamentary representation.

The eurosceptic Alternative for Germany party (AfD) won 10 percent of the vote. The AfD, with lead candidate Frauke Petry (pictured top), has capitalized on voter concerns about asylum seekers in its campaign. The party only narrowly failed to enter the national parliament and the state assembly in Hesse last year. It did, however, manage to garner seven seats in the European Parliament at elections in May.

The right-wing, populist party drew voters away from the extreme-right National Democratic Party (NPD), whose re-entry into the state parliament is still unclear.

The second strongest force is again the Left party, with 18.5 per cent, followed by the Social Democrat party (SPD), on 12.6 percent.

Since 2009, the most populous state in Germany's east has been governed by a coalition of the CDU and FDP under Tillich. The 55-year-old Sorbian, an eastern European ethnic minority group, is considered to be down to earth and very popular. 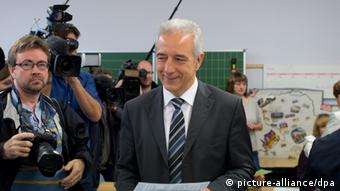 The CDU won by a large majority in 2009, with over 40 percent of the vote. The FDP was then at ten percent. It's suspected the CDU will likely form an alliance with the SPD this time around.

From 1949 until 1990, Saxony was part of the communist German Democratic Republic (GDR).

Polling day saw 48 percent of the over three million eligible voters cast their ballots, braving rain and cool temperatures. It was also the last day of summer holidays, perhaps a reason for the drop since the last election in 2009 - which saw 52.2 percent turnout.

Saxony has shone in recent years on a number of key indicators. It has become economically stable, and next to Bavaria has the lowest debt of any German state, while its students perform well in educational testing.