Opinion: The pipeline is dead! Long live the pipeline! | Business | Economy and finance news from a German perspective | DW | 02.12.2014

Opinion: The pipeline is dead! Long live the pipeline!

Vladimir Putin's surprising rejection of the South Stream gas pipeline is neither a victory for the Russian president, nor a defeat for the European Union, but merely a face-saving change of course, says Andrey Gurkov. Russian President Vladimir Putin can once again present a victory to his compatriots in the state-controlled media. By terminating the gas pipeline South Stream, he really stuck it to those thankless Europeans yet again! They should see what it's like to do without Russian gas. Russia will simply redirect its energy supplies to other regions of the world! At least that's how the strongman in the Kremlin sold his decision to the Russian public. It was Putin's personal decision - that much Russian Energy Minister Alexander Novak made absolutely clear.

Bypassing the Ukraine as a strategic goal

In reality, of course, the scrapping of the extremely expensive pipeline looks different than it does in the simple world of Russian propaganda. It is certainly not a victory for Putin, but nor is it a defeat, as some European commentators have said. Basically, Putin just did some reshuffling. But he kept an eye on both his strategic objectives and the most important buyers of his gas, the Europeans.

The state goal of laying the South Stream pipeline from the Russian mainland, across the Black Sea to Bulgaria, and then onto Austria, was to establish a transport route for gas supplies from Russia to the European Union while bypassing Ukraine. This was perceivable from the purely economic point of view of minimizing transit risks, just like the project's foreign partners, such as Germany's BASF subsidiary Wintershall, did.

For the Kremlin, however, geopolitics were more important. The completion of this pipeline would have enormously increased the dependence of a recalcitrant Ukraine on energy supplies directly from Russia. For as long as gas flows over Ukrainian soil to Europe, Kyiv can always tap the transit pipelines if necessary in case of an embargo from Moscow.

Turkey as a transit country for Russian gas

In light of the war-like state in which Russia and Ukraine find themselves today, South Stream's strategic objective has become more important for Putin. Thus, he acts according to the motto: The pipeline is dead! Long live the pipeline! Just as Putin terminated the South Stream project during remarks in Ankara, where he had traveled to meet with Turkish premier Recep Tayyip Erdogan, he announced a new building project with the exact same capacity as South Stream: 63 billion cubic meters of gas a year is to be pumped through the Black Sea to Turkey. 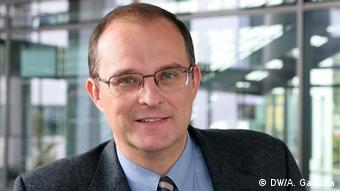 Many commentators are paying little attention to this particular circumstance because they are fixated on the spectacular scrapping of the South Stream project. Here, the Lord of the Kremlin has just begun a new game: Russian gas exports have found a new way into Europe - Turkey. Now, the infrastructure there must be expanded. This new pipeline, which will be notably cheaper because less of it is under water, will only transport around 14 billion cubic meters of gas to Turkey for that country's own use. That is precisely the amount that the state-owned oil and gas company Botas is importing from Russia via Ukraine and the Balkans at the moment.

Bulgaria not necessarily the biggest loser

The rest of the gas, around 50 billion cubic meters, will be pumped across Turkey to Greece, according to Alexei Miller, Gazprom's chief executive. So much for other markets! This new Russian pipeline is still directed at one target and one target only: the European Union.

For European consumers, not much is going to change except the name of the pipeline. Russia doesn't want to deprive the Europeans of those 50 billion cubic meters, which is more than a third of all Russian gas supplies to the EU. They pay good money for that gas, after all. Even Bulgaria, which Putin decried as the biggest loser of all of the South Stream stop, may be able to still collect its transit fees.

Just look at a map! Turkey shares a border with Bulgaria and Greece in the west. Where are these massive amounts of gas supposed to go once they arrive there? To Greece? They don't need all that gas, especially since the Greeks are getting the TAP pipeline in just a few years' time, through which Azerbaijani gas will be transported to Italy.

Thus, the only realistic option is the northwest route through Bulgaria to the Europeans' Baumgartner gas hub in Austria. That's pretty much the same route the architects of the South Stream pipeline had envisioned, except that the entry point is a few hundred kilometers farther south. But even the shorter route, known as Nabucco-West, would be an option here.

Half-baked plan with room for negotiation

Best case, the rejection of South Stream could turn out to be a face-saving maneuver for the Kremlin if it opts to follow the Europeans' rules for their energy networks after all. For the words of Gazprom chief Miller can also be interpreted as such: Russia will deliver the gas to the EU border, and from there, the Europeans should take over and allocate it as they see fit. If that were to happen, this whole kerfuffle might just have a happy ending yet. At least there wouldn't be a clear loser.

There's definitely a clear winner, and its name is Turkey. One of its ambitious economic and political plans involves becoming a hub for gas and energy supplies from the Middle East to Europe. The feeder pipeline to the TAP is a promising start. The new, significantly larger Russian pipeline would realize a serious infrastructure on Turkish soil that is predestined to delivering gas from Iraq and Iran to Europe. For Russia, that would mean strong competitors, but for the Europeans, it would provide an opportunity to further diversify their energy supply.

Will Russia reopen its Nord Stream gas pipeline to Germany? 20.07.2022

Russia's Nord Stream 1 gas pipeline to Germany has been shut down for maintenance since July 11. It's an annual procedure, but things are different now. Some doubt as to whether the gas tap will be turned on once again.