Opinion: The EU has to stand up to Donald Trump

The US was a wonderful country, then Donald Trump came along. His policies will certainly damage Europe - they are supposed to. The EU must defend itself by being as united as possible, says DW's Bernd Riegert. 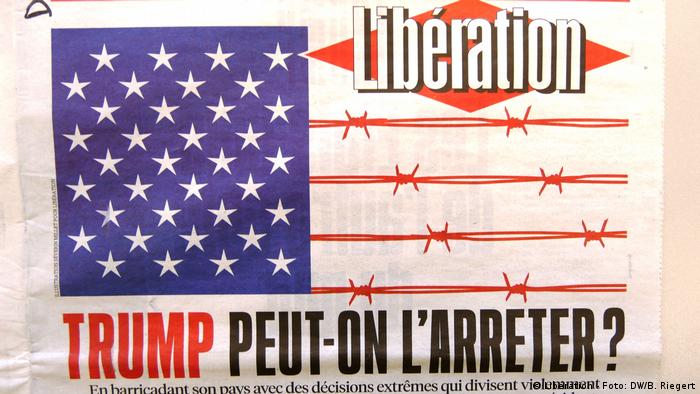 The French daily newspaper "Liberation" summed up the situation on the front page of its Tuesday edition: "Trump - can he be stopped?" Can we Europeans stop the businessman and reality TV star turned egomaniacal president? It will be one of the EU's most daunting tasks ever. For the man, who is attacking the foundations of American democracy with breathtaking pace and creating global chaos in his wake, is serious. All of the comforting assurances that the presidency would smooth Donald Trump's rough edges, and that things would not be as bad as they first seemed, have all turned out to be unfounded.

Donald Trump is - to put it clearly - a threat to the European Union and Europe's liberal democracies. He openly sympathizes with Russia's autocratic President Vladimir Putin and he supports nationalist and populist movements in EU member states. Therefore, it comes as no surprise that many in such circles, whether it be Gert Wilders in the Netherlands, Marine Le Pen in France, Heinz-Christian Strache in Austria or Beppe Grillo in Italy, have all professed their admiration for him. Worse still: The US president has enthusiastically called for the destruction of the European Union, thinks that the Brexit is great and views the rest of the bloc as a German-led consortium.

Bernd Riegert is DW's correspondent in Brussels and previously Washington

In his confused worldview, Trump sees the EU and Germany as economic competitors that must be beaten. In the eyes of his very roughly hewn administration, Germany, with its high US trade surplus, is seen as the root of all evil. Trump seeks to turn back the US trade deficit with half-baked slogans such as "buy American, hire American." He wants to create new taxes and tariffs whether these make economic sense or not. Thus, the EU must prepare itself for a trade war the likes they have never seen.

Europe must be ready to find new economic partners in Asia when the president destroys the existing world economic order. One could argue that Trump will put US credibility and credit-worthiness at risk with his proposed radical turn toward isolationism and dirigisme, but then one must ask, have logical arguments stopped him so far?

Finally, 11 days after Trump's accession to power in Washington, the President of the European Council, Donald Tusk, has spoken. He labeled the US a threat, one similar to that posed by Russia, China and Islamic terrorism. Tusk called for radical measures to save and defend the EU. That sounds drastic, but unfortunately, it is also correct. For far too long nothing was heard about Trump's dangerous escapades from voices in Brussels.

One only heard faint protest from Paris and Berlin. Poland, the Czech Republic and Hungary all refrained from criticizing the temporary ban on people entering the US from seven different Muslim-majority countries, because nationalist powers are at work in all three. It can only be hoped that Europeans will show unity when, at the latest, the Trump administration threatens Europe's economic development and prosperity.

Sending Washington a message from Malta?

At this coming Saturday's informal summit in Malta, the EU's 28 member states will have the opportunity to formulate a clear response to "Trumpism." Can we stop him? Yes - but only if we act as one! One head of government can likely be counted out from the start. British Prime Minister Theresa May has already thrown herself into Trump's arms in hopes of getting a good trade deal with the US. But since the UK exports more goods to the US than the other way round, she probably should not get her hopes up too high. Nationalists and isolationists have the upper hand in the UK as well. The British will rue the Brexit.

One glimmer of hope remains: The US Congress and the Supreme Court could perhaps slow Trump's march to triumph. But what of the millions that voted for him? Why in the world did they put this notorious fact-twisting con man in the White House in the first place? There is still no answer for that.