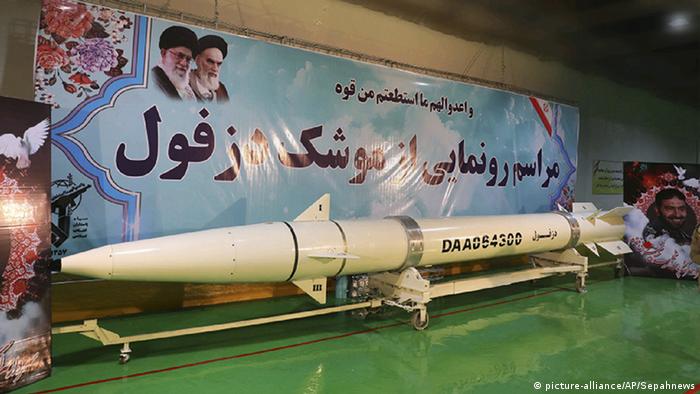 In February 2019, Iran unveiled the new surface-to-surface missiles it has just used to hit US targets in Iraq

It is actually absurd when Iranian missiles strike one or two US bases in Iraq and the world reacts with a sigh of relief. Based on what we know so far, the damage is minimal. US President Donald Trump's initial reaction was uncharacteristically calm. From the US capital this morning he merely announced he'd be issuing a statement — not firing cruise missiles at Iranian cultural targets.

Does this mean that large-scale escalation engulfing the entire Middle East region has been averted? No. But it appears that the world has at least taken a step back from the looming precipice it was pushed to by the US killing of Iran's General Soleimani.

Saving face in the face of war

Iran's missile strike appears to have been carefully measured: big enough for Teheran to save face, but below the threshold that might have prompted Trump to attack targets in Iran. The whole world knew that Iran would react in some way at some point. Soleimani's assassination was an act of war that Iran's leadership would not let go unanswered.

At the same time, it is noteworthy that Tehran declared that any reciprocation would come from Iran itself. That can be seen as a message to allies across the "Axis of Resistance" in Lebanon, Iraq and Yemen to refrain from taking action themselves.

Now that at least some of the steam has been let out of both the US and Iranian pressure cookers, a window for diplomacy has opened. Specifically for the Europeans. They must now do everything in their power to nudge both sides toward dialing down the military violence and rhetoric.

The public displays of force could very quickly be followed by pricks from militia groups allied with Tehran or campaigns that undermine Tehran's authority.

That is especially true if the US adheres to its policy of maximum pressure. Through sanctions it is waging an economic war that is suffocating Iran. And let us not forget that it was the US' unilateral withdrawal from the nuclear agreement in May 2018 that set the spiral of violence into motion in the first place.

Iran's cyberweapons keep US on edge

Tehran-backed hackers are expected to target the US and its allies to avenge the killing of a top Iranian general. So, how do Iran's cyberwarfare capabilities compare with those of the US, DW asks security experts. (08.01.2020)

German economy up but beer sales down 10h ago