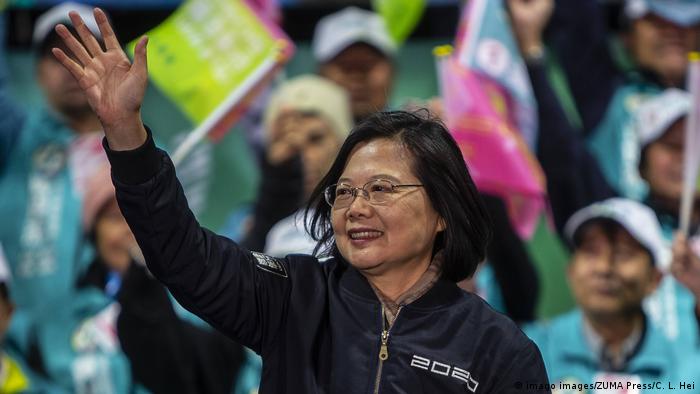 Chinese President Xi Jinping is a thorn in Taiwan's side, in terms of independence. He propagates the view that his country was not made for a Western-style democracy, but rather, based on its long history, is best suited to a communist system, with Chinese characteristics.

The 23 million Han Chinese on the island of Taiwan, who govern themselves democratically, don't fit into this picture. Xi has already threatened several times to take Taiwan by force, if necessary.

Tsai won the recent election because she has courageously, and repeatedly, rejected these threats from Xi. It was in her favor that the Taiwanese have been viewing developments in Hong Kong with concern since last summer.

There, the Communist Party's promise of "One country, two systems," which was given to the Hong Kong people when the colony was returned to China in 1997, has been broken several times. Under this catchy formula, a legally binding agreement was made that Hong Kong would retain its autonomy, by which I mean its democracy and independent judiciary, until the year 2047.

"One country, two systems" was originally invented by former leader Deng Xiaoping as a conciliatory formula for Taiwan: After the Maoists came to power, the defeated republican forces withdrew to Taiwan in 1949 with the aim of eventually recapturing the mainland. As is well known, nothing came of it.

"One country, two systems" is now off the table in both Hong Kong and Taiwan, and the Chinese leadership will have to come up with something new to win over the Chinese in these independent regions.

Tsai has, meanwhile, granted asylum to political refugees from Hong Kong. In her resolute fight for the island's liberal democracy, she was able to leave her opponent, the candidate of the pro-China Kuomintang Party, Han Kuo-yu, far behind. The People's Republic interfered in the election campaign in his favor and tried to influence the decision online.

For the moment, the fact remains that wherever people have the choice between his model and liberal democracy, they choose democracy. Elections will be held in Hong Kong in September. Already last autumn, Beijing's candidates suffered a bitter defeat in local elections. It's to be expected that Xi will not give in without a fight, neither in Hong Kong nor in Taiwan. 2020 may be the year of decisions.

Opinion: Germany's mandatory testing for travelers is only sensible 5h ago