Opinion: Steve Bannon attacking the EU from the right 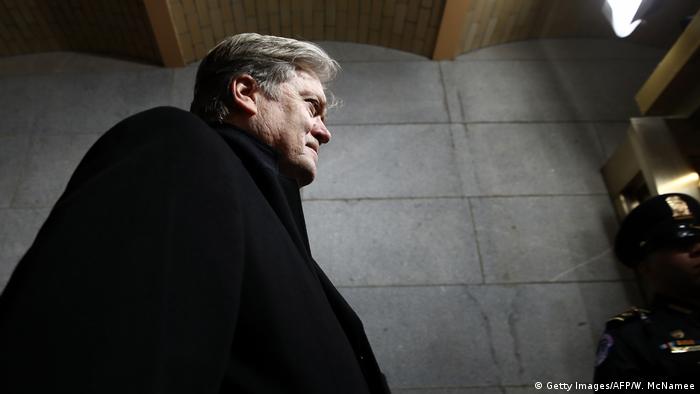 "The Movement" — that is the name of the radical right-wing operations center American nationalist Steve Bannon wants to plant in the heart of Europe, in Brussels. "The Movement" of all things! This cannot be a coincidence for the cunning chief strategist of anti-liberalism. Alarm bells should ring for Germans in particular, but for all other European citizens as well.

Adolf Hitler and Benito Mussolini called their fascist organizations "movements," after peoples' movements in Germany, Austria and Hungary in the second half of the 19th century. Hitler's "movement" brought misery, suffering and death to millions.

Bannon, who describes himself as a satanic anti-establishment warrior, is skillfully picking up on a trend in Europe with his new enterprise. Populists around the continent also like to speak of themselves as a "movement," be it the right-wing nationalist FPÖ in Austria or the Five Star Movement in Italy. The Alternative for Germany (AfD) maintains relationships with the right-wing extremist Identitarian Movement.

Bannon hits the mark with the name for his campaign consulting. Large and small right-wing populist to right-wing extremist parties in the European Union are already queuing up to benefit from the mastermind of Donald Trump's successful election as president of the United States.

Bannon, for his part, has spun a dense network in Europe. He met and charmed the leaders of the right-wing scene — from Alice Weidel, co-leader of the AfD, to Marine Le Pen, right-wing figurehead in France, and the right-wing radical interior minister of Italy, Matteo Salvini.

This new "right-wing axis" includes groups reaching from the "real Finns" to the "brothers of Italy" and has set itself the goal of forming at least the third-strongest group in the European Parliament after the next election in 2019.

But Bannon wants more. He clearly pictures a dissolution of the EU and an end to liberal democracy in Europe.

Right-wing nationalists at the European level have been quite uncoordinated up to now. Bannon could change this with modern campaign logistics, social media, voter profiling with skimmed data and other tricks from the US election. He could actually set something like a European right-wing nationalist "movement" in motion, building on electoral successes in Italy, Austria and Germany.

The established conservatives, socialists and liberals who have so far set the tone in the EU must defend themselves and develop concepts for a "counter-movement." The European Commission's shrug of a response that they were aware of Bannon's activities is not enough.

You have to get in the way of "The Movement" before it's too late. The Commission, like the EU's member states, must guarantee a "fair and equal" European Parliament election in accordance with the bloc's treaties.

In the US, Russian actors tried to influence the election. Whether Bannon knew, whether he supported the Russians or they supported him, is not proven.

What is clear, however, is that Bannon has long admired the leadership style of Russian President Vladimir Putin and his supposed struggle for Christian values. It is also clear that some right-wing populist parties in Europe are in part financed by Russia and maintain very close contacts with the Kremlin.

This is where the great manipulator Bannon could come in. Russian influence on European elections, which is said to have already taken place, could be expanded and used for concrete goals. The pro-EU democratic parties and institutions must now take a close look at what "The Movement" can do and how it will cooperate with Russian troll farms.

It is too late to start complaining when the right-wing populists have already taken over the European Parliament.

Opinion: A historic decision in Chile 6h ago