Opinion: Russia is no place for young people

It's almost impossible to find a decent salary and comfortable living conditions in Russia. For many young people, the only options are to build a life in Moscow or leave the country, says Anastasia Arinushkina. 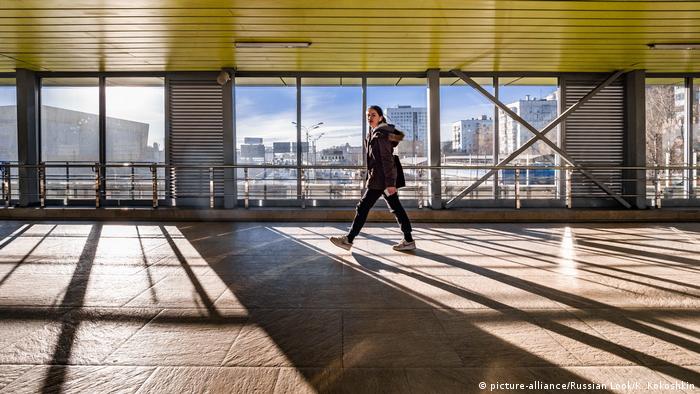 The West is decadent, we are besieged by enemies, but our spirit will not buckle under the pressure of gay-friendly Europe — this broken record has been playing on Russian TV for five years. National TV propaganda is trying to convince Russians that the whole world is against them because they have traditional values. The West has nothing; that's why they envy us.

All this while half of Russia's citizens are unhappy with the size of their salaries and struggle to pay for health care and education, according to recent polls. When it comes to young people, they do not believe in the idea of great Russia versus rotting Europe. In fact, many of them want to live in the West, according to the independent Levada Center pollster: Over 40% of Russians between 18 and 24 would like to permanently move abroad.

It's good in Moscow! How about in Russia?

You can argue against the survey results — you can say that young people aren't really going anywhere and things are not that bad in Russia. Sure, if you head out of Moscow on busted roads and see the way people live out there, it can get really scary, but you should still love your homeland.

Hey, things are pretty good in Russia! Especially if you live in Moscow. Even better, if you were born there and don't need to rent an apartment that costs half of your salary. It's just that Moscow is not all of Russia. Why is it only this easy to love Russia if you are in the capital?

And yes, there are people who opt to leave Moscow to revitalize a smaller community. This isn't a fairy tale: Several years back, a Moscow marketing expert, Vasily Dubeykovskiy, left for the city of Uryupinsk to turn it into "the capital of the Russian countryside." He has, in fact, done a lot for the city. Russian media outlets often report about it. When they do, they portray his move as a heroic deed.

I struggle to imagine a similar response in Germany. If a marketing expert from Berlin moved north to Stralsund, not even his friends would be impressed. Such a move in Germany does not mean self-denial and asceticism. For some reason, it's different in Russia.

Russia is awesome. It has amazing people, an amazing culture, amazing nature and it's dynamic, fun, exciting. But if you want to have unlimited access to any of that (except for the nature), you can only find it in Moscow.

I know what I'm talking about: I was born and raised in a tiny hamlet not far from Uryupinsk, on the outer fringes of the Volgograd area. Ahead of the Russian presidential election in 2018, I traveled home to report on residents' opinions on the vote and President Vladimir Putin. It turns out people there weren't thinking about Putin; they were thinking about survival.

To earn 13,000 rubles ($202/€176) per month is considered a solid income. Infrastructure is slowly shutting down, and half of the hospital wards are not working. This is the Russia young people are not just willing to leave — they are fleeing it. Nearly all my old classmates have fled in all directions, the lucky ones to Moscow, and the others to Volgograd or Saratov.

Even Moscow is losing its shine. Corruption is everywhere, and you could end up behind bars at any moment for going to a rally. A rally against corruption, for example. Is this the much-praised Putin stability? This stability can go to hell.

Going where you are needed

This is why people want to leave, and are following through. Most of them are young and educated. The most popular destination is still Germany. The reasons are obvious: There is high-quality education and health care here, a friendly attitude to foreigners, a welfare state that guarantees sufficient salaries, pensions and benefits.

Sure, the West isn't perfect. Integrating in Germany is not all sunshine and roses. It's hard to learn the language, it's hard to get used to a new culture, and sometimes you will be stunned by unexpected "backwardness" on some issues. But all of that fades away when you realize that you have rights, and those rights are respected. The government here serves the people, and doesn't treat the state budget as its private bottomless treasure chest. Here you also have a choice — you can live in the capital or a cozy little city of 300,000 people without giving up any comfort.

Not everyone will leave Russia. That's true. Only the most ambitious and assertive are heading to the West, and those who want to make enough for a living go to Moscow. And what about the great and beautiful Russia? Who wants to live there?

US has 'no better friend' than Germany, says US top diplomat Antony Blinken 5h ago

Coronavirus digest: Delta variant could make up 90% of Europe's infections 12h ago