By permitting himself to remain president until 2036, Putin has ensured that he will foreseeably remain Russia's only relevant politician. He has also potentially set a trap for himself, DW's Konstantin Eggert writes. 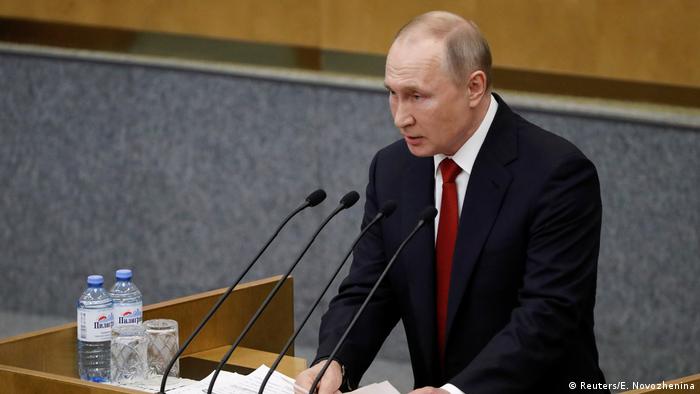 Alexander Pushkin's classic play Boris Godunov opens with a scene in which Muscovites, from the aristocracy to peasants, gather in front of a monastery. The titular protagonist, who happens to be the brother-in-law of the deceased Czar Fyodor, is secluded inside. Fyodor did not leave a male heir. Godunov pretends that he does not want the crown that is being offered to him by the council of the boyars. Feigning reluctance at first, he then quickly "accepts" the masses' plea to be crowned. Set at the turn of the 17th century, originally published in 1831 and later turned into a world-famous opera by Modest Mussorgsky, the play endures as one of the best practical guides to Russian (and generally authoritarian) politics.

Vladimir Putin pulled a Godunov on March 10. He allowed himself to be "persuaded" by deputies of his pocket parliament, the State Duma, that a total reset of the count of presidential terms (he is currently serving his fourth — until 2024) would be good for Russia's stability. This means that he can be reelected for another two terms and stay in the Kremlin until he turns 84 in 2036. In a clever PR move, the proposal was made by the world's first female cosmonaut, Valentina Tereshkova, a person universally respected by Russians.

Just one hour after this, Putin (whose schedule is usually planned for months in advance) personally appeared in front of members of parliament in a show of humility. He said he would accept the proposal only on the condition that the Constitutional Court rule it legally sound and voters approve it in a nonbinding plebiscite slated for April on a package of amendments initiated by Putin. His proposals include some social welfare improvements for poorer Russians, leaving little doubt that citizens will vote in favor of the amendments. And, if not, the authorities will provide the "correct" results anyway — through the now-routine manipulation of voter rolls and stuffing of ballot boxes.

Getting the plan past the Constitutional Court should have proved more difficult. In 1998, the court did not allow Boris Yeltsin to reset the counter on his own terms in office, although he had been elected president of a notionally different state — a republic within the USSR rather than a fully independent country — and, moreover, had a new Russian constitution adopted in 1993, during his first term. Modern-day Constitutional Court justices are famous for granting Putin's wishes. Russian law is not based on precedent. It will be easy for them to claim that "that was then but this is now."

Putin demonstratively rejected calls from one member of parliament to lift all limits on presidential terms. The amended constitution will now limit presidents to two six-year terms, making Putin's exception unique and giving him a kind of father-of-the-nation air. In theory, this is a step forward from the current law, which makes it impossible for a person elected president to serve more than two consecutive terms. Putin used this loophole when he swapped places with his prime minister, Dmitry Medvedev, in 2008 for one term.

Keeping his age in mind (he turns 68 in October), on Tuesday Putin ensured that he could become a de facto president for life — should he wish to. This brings the president short-term benefits and long-term headaches. By doing so, Putin reestablished himself as the undisputed center of Russia's political universe. Now that everyone in and around the Kremlin will be guessing whether and when he will leave the presidency and whom he will leave in charge, sycophancy will hit a new high among members of what passes for the political elite in Russia. He also ends weeks of uncertainty sparked by his January 15 proposal to amend the constitution. Putin will have even more power without being formally responsible for the state of the national economy, which is bound to take another hit after the Kremlin began its war with OPEC last week.

In the longer term, things look much less rosy. As Putin's core Soviet-born electorate shrinks, stability becomes indistinguishable from stagnation. That recent amendments violate not only the spirit but the letter of the law is not lost on people in Moscow, St. Petersburg and a dozen other major cities where Russian politics is made. Some will emigrate, weakening Russia's economic and intellectual potential. But those who stay will become increasingly politicized and restless. Moreover, the younger part of Putin's loyalist ruling class will find less than appealing the prospect of another 15 years under the aging leader and his equally old inner circle. A The Death of Stalin-style power struggle is not yet on the cards, but it cannot be excluded further down the road. By making "stability" synonymous with "Putin," the president is taking on a burden that over the course of Russia's thousand-year history has often proved too heavy for the bearer. Just read Pushkin.