Opinion: Olaf Scholz in Kyiv — winning back a bit of trust

The German chancellor's trip to Kyiv was intended to give Ukraine hope and deliver "very concrete things." Though many billed it as a "mission impossible," DW's Rosalia Romaniec says it went better than expected. 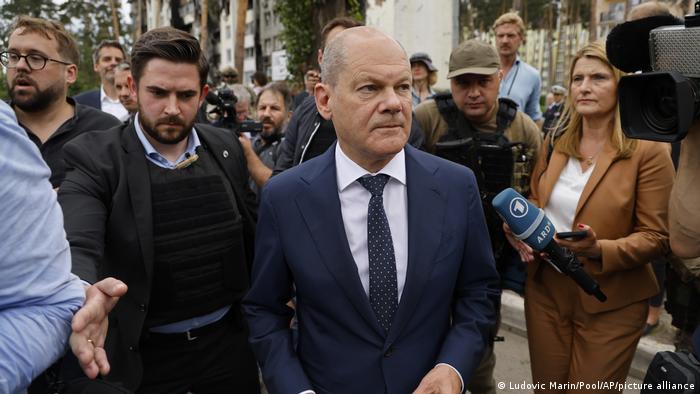 It was Chancellor Olaf Scholz himself that set the bar for his trip to Kyiv so high that many feared he was doomed to fail. "I am not going to join the queue of people who do a quick in-and-out for a photo opportunity. If I go, it will be about concrete things," he said a month ago.

Scholz didn't travel to Kyiv alone but rather with two fellow Western European leaders — French President Emmanuel Macron and Italian Prime Minister Mario Draghi. The trio represent the three most economically and politically powerful countries in Europe. Once in Kyiv, they were joined by Romanian President Klaus Iohannes, representing Eastern Europe. Although the trip was quick and lots of photos were taken it was indeed far more than an "in-and-out" visit.

The journey by the three Western European leaders was primarily meant to function as a sign of European solidarity with Ukraine. Still, as important as the symbolism was, it was also key that the three actually delivered — Olaf Scholz first and foremost, for all (Ukrainian) eyes were on him. After more than 100 days of war, the German chancellor finally boarded the night train to Kyiv, departing on what was likely the most important trip of his political career.

The two most fundamental expectations from the Ukrainian side: more heavy weapons from the West and a 'yes' to Ukraine's EU candidate status. As far as weapons are concerned the result was only modestly satisfying. Scholz promised more heavy arms but said little about delivery timelines. It will take a while, no matter how emphatic Scholz was in underscoring the fact that Ukrainian soldiers are already being trained in Germany. 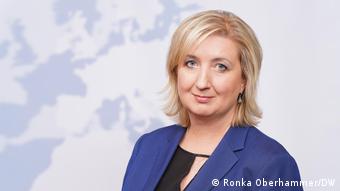 But the chancellor did not disappoint when it came to the second point, rather he was able to seize the momentum of the day. As head of the most powerful country in the EU and one with a unique historical responsibility vis-a-vis Ukraine, he was crystal clear: "Ukraine is part of the European family." With that sentence, Scholz took up the leadership mantle that a German chancellor must in this situation. He could not afford anything less.

The fact that Ukrainian President Volodymyr Zelenskyy called the decision "historic," was a clever way to demonstrate unity with Europe — despite all of the differences that can be expected to pop up on the long road from candidacy to membership. "I am satisfied," the Ukrainian president announced to the world.

A part of Europe one day

Ukrainian (and Eastern European) trust in German reliability has taken a beating over the past several weeks as a result of Berlin's political dithering. But on this trip, Scholz was able to shed a bit of his image as a hesitant, timid leader .

And for Zelenskyy there was much more on the line today than the formal utterance of a clear path to Ukrainian EU membership. His country is at war. His compatriots are exhibiting courage and a will to fight the likes of which Europe has not seen since World War II. Each new day they are forced to persevere. The prospect of being part of Europe one day helps in their fight.

When Olaf Scholz says Ukraine is part of Europe, Ukrainians understand that their fight for freedom has deeper meaning. Zelenskyy also needed to hear that message, for his country faces tough months ahead.

Something else was very helpful to Kyiv as well. "Ukraine must win the war," said French President Macron. Not only was that a clear message to the Ukrainians, but also to Moscow. These words gave hope and relief to others in Eastern Europe, too.

Scholz understood what needed to be done

Of course the trip did not fulfill all of Kyiv's wishes. Above all, Ukraine will have to be patient when it comes to heavy weapons. But for Zelenskyy, the fundamental message of the day seemed to be even more important. Before the trip he said, "What we need from Chancellor Scholz is a guarantee that Germany supports Ukraine." There is no room for compromise when it comes to Germany's relationship with Ukraine and with Russia.

Scholz understood the message, and his support for Ukraine's path to EU membership means that his trip can be seen as a success. And that is no mean feat. Scholz and Macron have long been viewed as Europe's top skeptics. For many, the Franco-German duo represents a failed Eastern policy and coziness with Moscow. The Minsk Agreement negotiated by Paris and Berlin is dead, and no longer an option for Zelenskyy. The fact that three Western European heavyweights so clearly articulated their support for Ukraine as part of the European family is an entirely new perspective.

For Olaf Scholz, the journey was also a chance to quiet criticism of his prior prevarication. But to ensure that the criticism cedes for more than the moment, he will now have to stay the course.

This article was originally written in German and translated by Jon Shelton.