Opinion: No winners, only losers at the caucuses in Iowa | Americas| North and South American news impacting on Europe | DW | 04.02.2020

Opinion: No winners, only losers at the caucuses in Iowa

The people of Iowa have met to choose their preferred presidential candidates — but the results are still to come. It’s a disastrous flop for Iowa and the Democrats, writes Carla Bleiker from Des Moines. 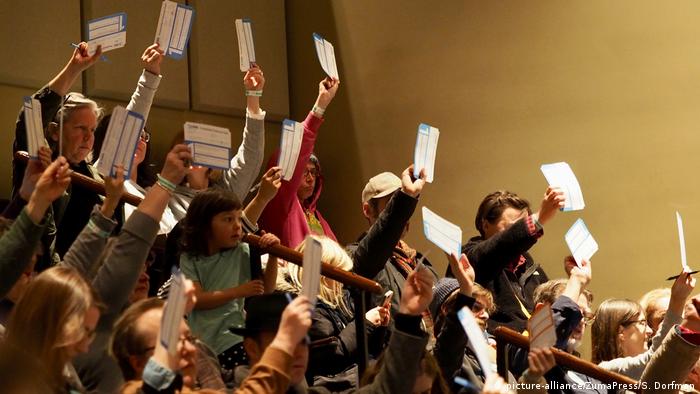 Experts called it a debacle. There were serious problems with the counting and transfer of results for the Iowa Caucus, the first state to weigh in on choosing party nominees for the November presidential election. At 10 p.m. there were still no official figures from any of the constituencies.

Four years ago, 90% of precincts had already reported results by that time. Even at midnight, observers were still waiting in vain. The Democratic Party in Iowa failed to provide detailed feedback on why the process had dragged on so long. One statement vaguely spoke of "quality control” issues in reporting the results.

The app, with which the precinct volunteer organizers were supposed to use to transmit the results to party headquarters, did not work properly. The caucuses, almost entirely staffed by volunteers, had planned that precinct captains could also theoretically give their numbers over the phone. But at least one volunteer reported that he had been on hold for over an hour. While he was live on CNN, someone at party headquarters picked up the phone — but then hung up before the volunteer had a chance to report precinct results.

The problems are seriously damaging the role of the Iowa Caucus. What was presented on Monday night was the opposite of professional politics. The debacle reinforces the feeling for outsiders that the system is stuck in the last century.

Precint captains also have to manually count "presidential preference cards," which are filled in by participants as an extra verification mechanism after they have placed themselves in the corner of the Caucus room allocated to their candidate. Only then can the volunteers calculate how many of the delegates their precinct provides each candidate.

The end of the Caucus method?

At Lincoln High School in Des Moines, where four precincts held their caucus, the last step in the process caused the most problems. The participants of one precinct had made their decisions and turned in the cards after just an hour. But when asked how the five delegates of the constituency would be divided between Bernie Sanders, Pete Buttigieg and Elizabeth Warren, one of the volunteer organizers replied, slightly irritated: "We're just trying to figure that out."

For the Democrats, the whole thing is an annoying false start. The eyes of the entire US press were on Iowa to see who would emerge from the Midwestern state contest as a promising challenger against President Donald Trump. Some political pundits were already reflecting on the demise of Iowa's special status as "first in the nation" in the pre-election race or even the end of the caucus method itself.

But local journalists from Des Moines and Cedar Rapids stressed that this criticism is unfounded. They point out that the systems for transferring the results are new and that there had been many candidates. It was foreseeable that the announcement of results would take longer.

Read more: The Iowa battle: winning over the polls and the people

Is it too early to announce the end of the caucus system? The event certainly has a certain charm. You rarely see so much enthusiasm for the democratic process as with caucus participants who cheer when they have managed to win another supporter for "their" candidate. But the method will only continue to exist if it works. Delays like Monday evening give rise to doubts about the indisputability of the results. When this happens, the caucus method is no longer tenable.

The dispute in the US Senate has initially been limited to the procedural rules of the impeachment process. While the Republicans have not wavered, impeachment proceedings cannot be avoided, argues DW's Carla Bleiker. (22.01.2020)