Opinion: Merkel is governing without her party

Angela Merkel stands by her refugee policy. Even after the shock of last weekend's state elections. Though there may be good reasons for it, the chancellor is distancing herself more from her party, says Jens Thurau. 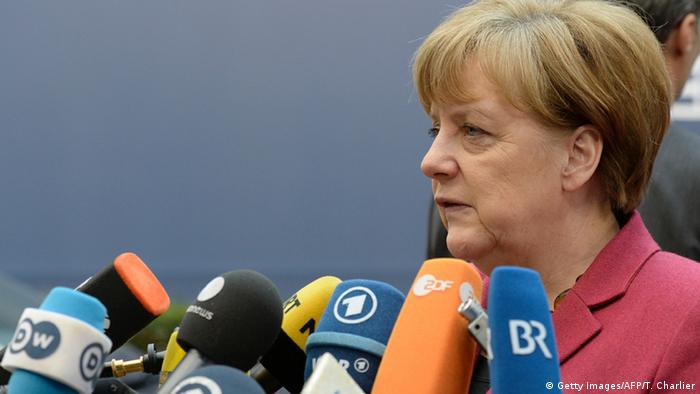 Let's turn back the clock: Cologne, November 1983, the Social Democratic Party conference. Former Chancellor Helmut Schmidt is sitting there, alone. His peers have just rejected a proposal to uphold NATO's Double-Track Decision to offer the Warsaw Pact a missile limitation deal. The no votes numbered 400 - just 14 voted for the proposal. Even Willy Brandt, head of the SPD at the time, and Hans-Jochen Vogel, the head of its parliamentary faction, have turned their back on Schmidt, who had lost his office to Helmut Kohl a year before.

Could the same happen to Angela Merkel? For a long time, that would've been hard to believe. Yet after last weekend's elections it seems more plausible. Or perhaps more accurately: it seems more plausible since last Monday, when the chancellor sat in Berlin pretending the heavy losses the CDU had taken in Baden-Württemberg and Rhineland-Palatinate were no big deal. She stood by her refugee policy. So far, so good. There may have been good reasons to do so, but the fact that her party was hurt as a result appeared to bounce right off her.

Jens Thurau is a correspondent in DW's Berlin studio

The German population's views about Merkel's handling of the influx of refugees are many and varied. The majority is relieved that at the moment, few refugees are coming. And in the long-term, many would like a cap on the numbers that arrive. Yet at least in the western states, the majority of people view the incoming refugees as an asset. Is that a contradiction? Actually, it's not - but it is a symptom of some insecurity. People don't know where this path will lead.

The CDU is especially unsure. Merkel has carried a heavy burden in her time in office, and accomplished much: putting an end to the use of nuclear power, stopping mandatory conscription, the acceptance of a newer, more liberal image of the family, more rights for homosexuals. Her party took this in its stride because a stronger impulse was always there: once in power the CDU always voted for and defended the chancellor. Yet at some point things reach a breaking point.

A democratic party to the right of the CDU

So now here we are, with a scenario that former CDU strategists always wanted to avoid: a strong power to the right of the Union, one that is electable in the eyes of the moderate middle and not just the hard right. The idea that the Alternative for Germany party (AfD) will simply disappear once the refugee crisis has been resolved (which will happen how?) sounds naive. What the AfD has been verbalizing is something the Union had absorbed without any difficulties in the past. But Merkel's CDU can no longer do that.

The CDU has likewise lost some of its most important qualities in the eyes of voters: reliability and trustworthiness. Those were qualities that Germans long found in Angela Merkel. One didn't necessarily need to agree with her, but many felt the country was in her good hands. But when the CDU duels with its Bavarian partners in the CSU like medieval knights - and CSU leader Horst Seehofer lashes out at Merkel on a daily basis - this trust is destroyed. It must alarm Merkel that the many conservatives in Baden-Württemberg have sought and found this reliability in the Green party's Winfried Kretschmann. Yet that doesn't seem to be the case. Angela Merkel has to be careful that she doesn't curl up in her chancellor's office. Though if she did, she wouldn't be the first chancellor to do so.

We welcome your comments beneath this article!

Opinion: The party landscape has changed

It 's not the end of the world. Germany has not gone under and the chancellor has said she is sticking to her refugee policy. But those will not be the only consequences of the AfD’s upsurge, says DW’s Dagmar Engel. (14.03.2016)

Opinion: Welcome to the club, Germany!

Now it's official: Germans are just as likely to vote for right-wing parties as anyone else in the EU. To get an idea of what will happen next, just look to France for inspiration, writes DW's Max Hofmann in Brussels. (14.03.2016)