Opinion: Extinction Rebellion — nothing matters to this doomsday cult

Extinction Rebellion founder Roger Hallam has downplayed the Holocaust. The statement disqualifies him as a spokesman and casts an unflattering light on his entire organization, says DW's Martin Muno. 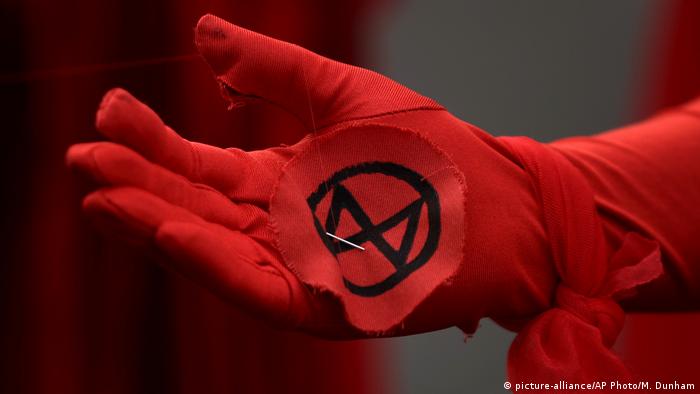 "Just another f--kery in human history" — that was how Extinction Rebellion founder Roger Hallam described the Holocaust in a recent interview with German weekly newspaper Die Zeit. He downplayed the event by saying genocide had been repeatedly committed over the past 500 years of human history. His flip and disrespectful words are reminiscent of those uttered by Alternative for Germany (AfD) chairman Alexander Gauland, who infamously stated that the Nazi era was merely "a speck of bird shit in over 1,000 years of successful German history."

Hallam's remarks clearly belong in the right-wing populist camp. And that fits the bill: In September, Hallam declared that right-wing extremists and sexists were welcome to participate in Extinction Rebellion activities. The organization's logo also bears strong resemblance to the runes so often used by right-wing extremist groups.

Read more: Extinction Rebellion — how far can the protests go?

A dividing line between conservatives and right-wing radicals

The question of whether the Holocaust was unique in human history has repeatedly been a point of contention. In 1986, historian Ernst Nolte claimed the killing of Jews was a reaction to Stalinist crimes, saying that it was ultimately an "Asian deed." Nolte's statement ignited Germany's so-called historian fight. Philosopher Jürgen Habermas countered Nolte, arguing that the Holocaust was a singular event and warning of the dangers of "normalizing" Germany's Nazi past — exactly the kind of normalization that representatives from the right-wing-populist AfD propagate.

In today's Germany, the significance of the Holocaust has become the fault line between conservatives and right-wing radicals. Those who relativize or deny the Holocaust have divorced themselves from all democratic discourse. And that is exactly what Roger Hallam has done.

But Hallam and his supporters are fine with that. They claim that everything we know will become meaningless when plants, animals and humans become extinct from rising temperatures. Nothing matters in the face of the apocalypse they say — thus it doesn't matter if the Holocaust was unique.

A disservice to the environmental movement

According to that line of reasoning it also doesn't matter if I pay my taxes, whether I am friendly to those I meet, or if I do my part to make the world a better place. And in the face of impending death it doesn't matter if I try to live a climate conscious life or spend my last days jetting around the world, driving the largest possible SUV to the bakery, or just throwing plastic garbage into the next closest river.

Despite the distance that Extinction Rebellion's German chapter has sought to put between itself and Hallam's words, there can be no mistaking what the movement actually is — a doomsday cult. One that plays on peoples' emotions and fears. One that also refuses to engage in discussions as to how we can quickly and significantly reduce CO2 emissions and pivot to a carbon-neutral future. In refusing to do so, Hallam and his associates are doing the entire environmental movement a great disservice.

Opinion: #MeTooInceste — A blind spot, not just in France 14h ago

Opinion: Protests in Tunisia come with a bitter taste 16h ago