The European Union is skidding further toward a political crisis. Skepticism is growing across the bloc and the willingness to reform is ebbing, warns DW's Bernd Riegert. 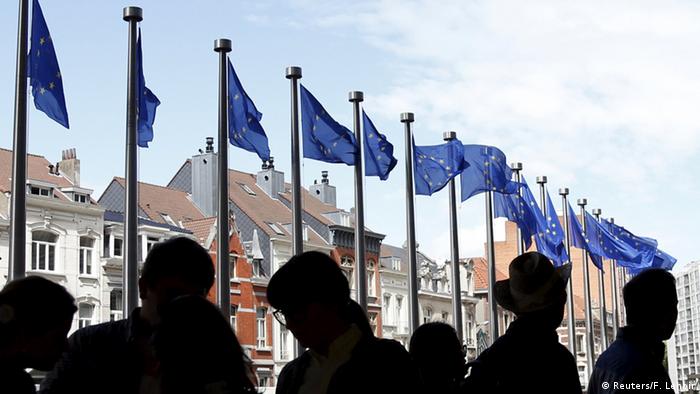 The latest election victories by Euroskeptics in Poland, Spain, the UK, and Finland should make it clear to all the integration romantics: the European Union has massive problems that are only likely to get worse in the coming months.

Tremors are coming from a host of member states - for different reasons. At the core of the EU - in Germany, the Netherlands, Belgium, Luxembourg and parts of France - governments are hoping for business as usual. But that won't be enough to keep things together. The forces at work are too powerful.

Pressure from left and right

The radical left government in Greece is constantly facing bankruptcy and a possible exit from the eurozone. The UK is holding a referendum about membership in the EU with an uncertain outcome. Leftist movements are growing in Spain and Portugal, putting pressure on the conservative proponents of past EU policy, and in Poland, there's been a surprising win by a presidential candidate who is just as Euroskeptic as the Brits. Poland's autumn parliamentary elections could put Euroskeptics back in power.

For the first time, a party that is critical of the EU is part of the government in Finland. Hungary is being governed by a Euroskeptic who has already described the president of the European Commission as a dictator – if only in jest. Only Italy's socialist prime minister has successfully managed to rein in the Euroskeptics. What's going on with the good old EU? Critics from both the right and left are running rampant.

If you look at the map, Germany appears to be surrounded. The government is reacting to the growing level of skepticism on the outer edges of the EU by circling the wagons. At the next EU summit, Chancellor Angela Merkel, together with French President Francois Hollande, is set to recommend closer cooperation of the 19 states in the monetary union. The euro states would have approved such a plan at the height of the euro crisis two years ago; today though, no one wants to hear about it anymore.

Merkel has ruled out a renegotiation of bloc treaties as demanded by British Prime Minister David Cameron. Cameron has been strengthened by his recent convincing election victory, but Merkel is refusing to budge. Given the current tensions, changes to the treaties are hardly likely to be pushed through. In addition, they would require referendums in various member states.

A large-scale reform of the European Union is also difficult because the demands of the critics and the reasons behind the demands are so different. The British want less Europe, and also to pay less. They don't think they need the EU. Poland and Spain are profiting from the EU; their economies are growing again. Despite this, people there project their frustrations on Europe. The southern member states are demanding more solidarity from Germany, common debt management and, essentially, more money. But the Germans aren't prepared to step up. Economically speaking, Germany is doing well. But there's limited support for helping out its poorer neighbors.

There's no easy way out of the crisis. The European Commission continues to try to finance its investment plan, which is meant to create jobs. The member states are waiting to see what happens. The Commission is proposing a fairer distribution of refugees. The member states reject that. The Commission is trying to negotiate a free trade agreement with the United States. The German population is particularly skeptical. Wherever you look, truly common goals among the 28 heads of state and government are increasingly harder to find.

Attempting a basic reform that would satisfy Britain, Spain, Greece, Poland, and Germany is not to be expected. The most likely solution is to further tinker with the existing treaties. At least until the next presidential election in France, set for the spring of 2017. That's when the right-wing populist, anti-Europe Front National hopes for a breakthrough success. If France were to firmly land in the Euroskeptic camp, it would mean the end of a union that has grown and thrived over the past 60 years. That's why Germany has to do something. Circling the wagons won't be enough.

Over pork belly and lime cream, David Cameron and Jean-Claude Juncker have kick-started efforts toward EU changes to thwart a possible Brexit. The UK's leading manufacturing association wants Cameron to move up the vote. (26.05.2015)

The French are losing faith in their politicians, and at the same time, turning away from political life. Now, the country is discussing the reasons for the crisis. Criticism is centering on the power of the president. (25.05.2015)

The Bank of England has said it plans to research the economic risks of Britain leaving the EU. The admission confirms an email about the project that accidentally went to the wrong address. (23.05.2015)

Joe Biden inauguration: 'This is democracy's day' 41m ago

Opinion: Joe Biden is the right US president for the moment 8h ago

Opinion: Sit tight until summer, amid Germany's lockdown 21h ago