Twelve months of Brexit negotiations have shown it is impossible to leave the EU without harming yourself. That is why it is clearly time to turn back, says Bernd Riegert. 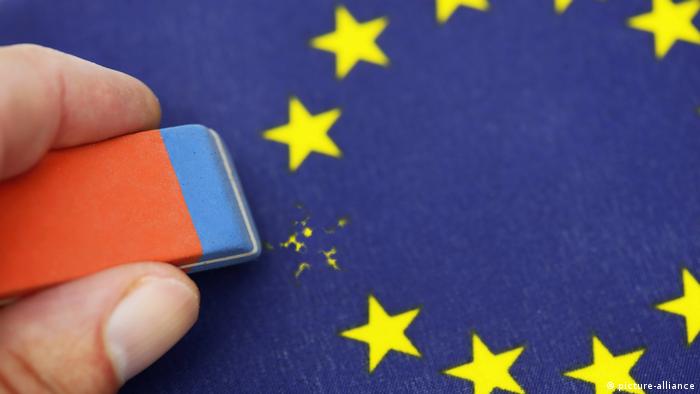 Exactly one year from now the United Kingdom will, by its own choice, leave the European Union. And for the past year the British government and the EU have been negotiating the framework for that exit. Admittedly, they have little to show for the effort. After months of discussions – one could also say chaos – within the British government, the only result so far has been an agreement regarding a transitional phase. Brexit will be delayed a bit, until December 2020, in order to allow the British to negotiate whatever it is they hope to achieve in the end.

And what exactly do they hope to achieve? Nobody knows. British Prime Minister Theresa May and her Brexiteer sidekick, Foreign Secretary Boris Johnson, wax poetically about the grand opportunities that the UK will have as soon as it frees itself of its European shackles. Yet even the prime minister doesn't seem to know just where those supposed opportunities lie. Most commerce associations, legal experts and reputable EU experts are unanimous in their assessment that the UK and Northern Ireland will be no better off for having left the EU. Different yes, but not better off.

Since the United Kingdom wants out of both the customs union and the single market, the only option it has left itself is to come up with a comprehensive free-trade agreement. Yet such an agreement must first be negotiated. One year ahead of Brexit and three before the end of the transitional phase, it is impossible to see just how such an agreement would be more advantageous to the UK than the current system.

So far, the British government has failed to achieve any of the aims staked out by "Leave" proponents: It hasn't saved money, for budget payments to the EU will continue until the transition phase has ended. It has not taken control of immigration into the UK from EU states, for the freedom of movement guaranteed to all EU citizens will be maintained until the very last day of the transitional phase. It has not won any legal independence, for the Court of Justice of the European Union (CJEU) will continue to have the final legal say until the transitional phase has ended, meaning that EU law will supersede British law until the end.

The only thing that is clear is what the UK has lost: The right to have a say within the European Union. One year from now, not one British politician will be seated at the EU's Council of Ministers, nor will any be allowed to vote in the European Parliament.

That said, the European Union, which has shown unusual solidarity in defending and pushing forth its interests, will gain nothing from the situation either. The UK's withdrawal from the Union weakens the EU on the international stage, blows an enormous hole in its finances and unnecessarily complicates business activity with the British Isles. The EU has been managing the negative effects of Brexit and is constantly letting the UK feel the heat for it. So far, the EU has made no compromises. And that is the right course of action. The 27 remaining member states must stick together and cannot afford to worry about the needs of a soon-to-be third party like the UK.

After a year of political wrangling, it seems that both sides of the debate are somehow displaying a will to find the path to a softer Brexit. But they are showing nothing more. Nothing legally binding has been agreed upon. There have been declarations of intent but no draft contracts. The transition phase has not been effectively agreed upon either. It has only been provisionally agreed to in the event that the actual withdrawal date has been agreed to by the end of this year. Yet both sides are, in fact, far from agreement.

The touchiest unresolved issue at the moment is the EU's external border between the UK and EU member state Ireland. All parties agree that Northern Ireland, which is part of the UK, and the Republic of Ireland should continue to co-exist as neighbors with an open border. Nevertheless, a border between Northern Ireland and the rest of the UK is also impossible to imagine. So where exactly is the new EU external border – the Brexit defense wall – supposed to be installed? The British government has promised to put forth a workable proposal on the issue soon. The sooner the better.

So far, the economic ramifications of the proposed Brexit have been modest. Still, no one can say with any certainty what will happen when things really become final. The entire saga has become one frivolous political experiment. It would be better to just forget Brexit and do away with this nonsense. But the referendum trumps all that. There is still time enough to stage a second – and in light of the foreseeable effects of Brexit – more honest referendum. Yet such a referendum would likely divide the UK even more, eventually splitting it apart for good. But is that any reason to carry on blindly? There is still a year to call off the divorce.

Colombia captures its most wanted drug lord 'Otoniel' 51m ago

Hungary: Orban accuses EU, US of meddling as election looms 4h ago

Opinion: EU emphasizes power over values in row with Poland 7h ago