Opinion: Anthony Kennedy retirement is a game changer for US

Supreme Court Justice Kennedy's retirement could not come at a worse time: It allows a president who does not care to understand the most basic tenets of American civics to shape the US's highest court for decades. 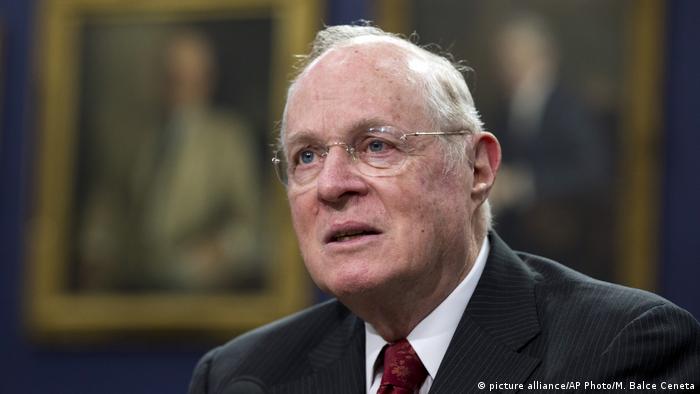 In his less than two years in office, US President Donald Trump — with his style, words and actions — has already shaped the United States and the way it relates to the world for the worse. But the pernicious influence Trump has had so far on domestic and international policy pales in comparison to the lasting impact his choice for retiring Supreme Court Justice Anthony Kennedy will have on the country and the world.

The announcement of Kennedy's retirement is the biggest possible shock for anyone who had hoped — notwithstanding the daily havoc Trump wreaks — that that the damage he could do in his tenure would be limited to his time in office. This hope was grounded in the simple fact that Trump has shown himself to operate reactively, without long-term strategy or affinity for the finer points of governing. Many hoped that his short-term management style would thus limit its significance.

But now, with his impending retirement, Justice Kennedy has served President Trump a unique opportunity on a silver platter: The upstart president who railed against Washington elites and called for "draining the swamp" can now put his stamp on the country for decades to come. By selecting Kennedy's successor, Trump can not only solidify the current conservative five-to-four majority on the Supreme Court, but can replace Kennedy — an old-school conservative appointed by President Ronald Reagan — with a Republican nominee in the mold of Trump himself.

Make no mistake: A conservative like Kennedy is anathema to Trump and the Republican Party of today. While he sided with the conservative block of SCOTUS most of the time, Kennedy has for three decades consistently expressed his judicial independence, and Republicans could never take him for granted. As a result, Kennedy was often the decisive and tie-breaking voice on the court.

Arguably the best example of Kennedy's unorthodoxy is the fact that this eminently conservative justice became, as The New York Times once put it, "the greatest champion of gay rights in the history of the nation." He wrote the majority opinions in all of the four signature gay rights rulings, including the court's landmark 2015 decision in Obergefell v. Hodges that established the constitutional basis for same-sex marriage.

In selecting a successor, Trump will try to make sure not to appoint a similarly independent mind, but someone beholden to him and the sentiments of his base. That's because appointing conservative judges to the Supreme Court to secure and possibly expand a Republican majority on the court was one of Trump's key campaign promises. He started to fulfill his vow by successfully appointing the staunch conservative Neil Gorsuch, whose influence has already been visible in recent decisions.

Kennedy's retirement now offers Trump and the GOP the chance to double down on their promise. To that end, they will rally even more vocally for Republican voters in the midterms to make sure the Senate — which must confirm SCOTUS nominees through procedural hearings — stays in Republican hands.

This makes Kennedy's retirement a double-win for Trump and the GOP. It provides the perfect rallying cry for many conservatives put off by Trump to still vote for Republican candidates this fall. In doing so, they can fulfill Trump's dream, and many Americans' nightmare, of shaping the country's jurisprudence for decades to come.

Unfortunately for America, the chances of Trump getting his way and appointing a Trumpian justice are good. This is not what the US Constitution intended — the separation of powers enshrined in that founding document envisioned a nomination process that would continuously assemble a court that looked to the law in its decisions, not to political trends and party platforms.

With the constant onslaught of increasingly bad news emanating from Trump's presidency, it's hard to single out one moment as a game changer. But Kennedy's retirement could be really be that moment. One shudders to think what one more Trumpian justice, appointed for life, could mean for the equal rights and dignity of all in America. The incoming ninth justice will have a deciding say in cases of abortion rights, immigration, gun control, campaign financing and environmental policy, to name but a few current issues — i.e., the general direction of the country for decades to come.

Trump's presidency was horrendous from the start, but until now we could hope that its damage could be somehow contained. With the retirement of Kennedy that hope has been extinguished. We must brace ourselves for the sobering thought that Trump's legacy could last for generations. That's bad news for America, and for the world.

Brazil election: What you need to know 3h ago

Opinion: Germany's Angela Merkel, an ex-chancellor from a different era 1h ago