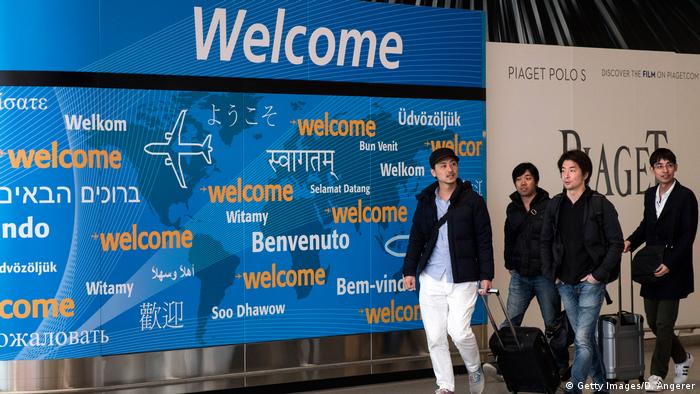 The US Supreme Court ruled 5-4 on Tuesday to allow President Donald Trump to keep his travel ban against people from several mostly Muslim countries. The conservative majority on the court agreed that the "Muslim ban," as it has been called, does not violate US immigration law.

Chief Justice John Roberts wrote in the court's opinion that the president had "set forth a sufficient national security justification" to stop many people from traveling to the US from Somalia, Iran, Yemen, Syria, Libya, Chad, North Korea and Venezuela. He added, however, that the court had "no view on the soundness of the policy."

The decision marks what can be seen as the first major policy victory for Trump since taking office in January 2017. In a statement, Trump called the ruling a "profound vindication," and a "tremendous victory for the American people."

In a dissenting opinion, Justice Sonia Sotomayor said the ruling "leaves undisturbed a policy first advertised openly and unequivocally as a 'total and complete shutdown of Muslims entering the United States' because the policy now masquerades behind a facade of national-security concerns."

She added that any "reasonable observer would conclude that the proclamation was motivated by anti-Muslim animus." She also accused her five colleagues who voted to uphold the ban of  "ignoring the facts, misconstruing our legal precedent, and turning a blind eye to the pain and suffering the proclamation inflicts upon countless families and individuals, many of whom are United States citizens."

Trump's "Muslim ban" has gone through several iterations and been struck down by federal courts in Hawaii and Maryland before its final version emerged in September 2017, banning entry for most people from eight countries to the United States. Critics have highlighted that no one who has committed acts of terror in the United States has come from any of the Muslim-majority countries on the list.

A ruling by the court to hear the case has left the law largely in effect since December.

Various NGOs and religious and aid organizations across the United States joined in a chorus of condemnation for the Supreme Court ruling.

Oxfam America was "dismayed," while the Alabama-based Southern Poverty Law Center called it a "hateful and discriminatory Muslim ban."

The Council on American-Islamic Relations called on voters to counteract the ban by going to the polls for elections in November and voting for a "Congress that has a different mentality on immigration and civil rights."

Spokesman Wilfredo Ruiz added that Trump's "bigotry should have been as clear to the Supreme Court as it was to Muslims."

US Representative Keith Ellison of Minnesota, the first Muslim elected to Congress, compared the ruling to the Supreme Court decision that upheld Japanese internment camps during World War II, saying it  "will someday serve as a marker of shame."

Ellison said that those opposed to bigotry must fight "for an America that recognizes that every human life has value and reflects our values of generosity and inclusion for all."

Travel ban: US to again conditionally admit refugees from 11 nations

The US will resume admitting refugees from countries that it said posed increased security risks. Officials will apply extra vetting to people from the mostly Middle Eastern and African nations. (30.01.2018)

The Trump administration has allowed the resumption of refugee admissions into the US under new stricter screening rules. Arrivals from 11 nations will remain blocked from entry, pending a 90-day review. (25.10.2017)