Power shifts in The Gambia, Ghana and Zimbabwe in 2017 sparked hope among Africa's youth. But the outlook for 2018 is anything but rosy, says DW's Claus Stäcker. 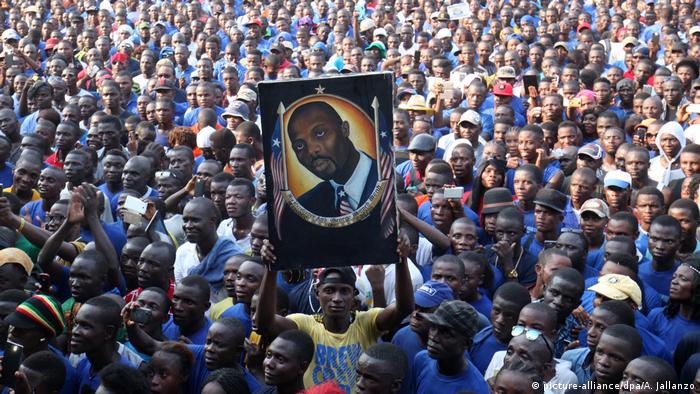 The role of former world class footballer George Weah in Liberia is symptomatic of the young continent's feelings of hope and longing. International success, financially and politically independent – these qualities alone were enough for the country's youth to support him as a presidential candidate. At the age of 51, he's still regarded as a something of a youngster himself.

Making up three-quarters of the continent's population, Africa's youth is longing for generational change in politics. Hopes were high in 2017 when Gambian dictator Yahya Jammeh and Zimbabwe's long-time ruler Robert Mugabe were overthrown. The year ended with a glimmer of hope from South Africa with the election of Cyril Ramaphosa as head of the ruling African National Congress (ANC), replacing President Jacob Zuma.

On closer analysis, however, the euphoria quickly disappears. The Gambia's change of power was based on popular will. But without the determined intervention of the West African ECOWAS bloc under Senegal's military leadership, the brutal charlatan Jammeh would have remained. The Gambia, the smallest country in Africa, needs military aid. The new seven-party government coalition – born out of necessity – has a lot of plans, but is still considered to be fragile and disorganized.

In Zimbabwe, following the much-celebrated end of Mugabe's hold on power, disillusionment has quickly set in. Instead of pursuing a government of national unity, new strongman Emmerson Mnangagwa formed a cabinet made up of loyalists and notorious military men. Ahead of the 2018 elections, the 75-year-old stands for order and stability, but hardly for the radical reforms that the young generation and hundreds of thousands of exiled Zimbabweans were hoping for.

South African presidential hopeful and new ANC leader Ramaphosa is surrounded by Zuma loyalists. The divided party will have a hard time bringing about change in the country.

In the Democratic Republic of the Congo (DRC), President Joseph Kabila's term expired over a year ago. Now an election is scheduled for the end of 2018, but Kabila's delay tactics and his crackdown on the opposition leaves little room for hope that he will voluntarily and peacefully give up power in twelve months' time.

South Sudan is also expected to hold elections, postponed since 2015. Just before Christmas, the tenth ceasefire agreement was signed. But the militarized country still has no plan in place which could result in lasting civil order. Democracy remains far from sight. The youth of South Sudan is under arms and the polls of 2018 are anything but certain.

The yearning for generational change is perhaps strongest in Cameroon, where President Paul Biya (84) is about to begin his 35th year in office – and may be elected for another seven years in 2018. So far, only a single opponent has dared throw his hat in the ring. Biya routinely suppresses opposition and the media, while the state military uses force to eliminate opponents.

Numerous harrowing documents and cries for help have reached Deutsche Welle from the former British-ruled region of South Cameroon. People there are asking why the world continues to stand by and watch as their people are killed by the Biya regime – they have already declared an independent state of "Ambazonia."

Neither Cameroon, Congo, nor South Sudan have democratic power shifts in sight. The upcoming elections in Gabon, Mali and Togo are also unlikely to provide any encouraging signs of change. In Zimbabwe and South Africa, only minimal progress can be expected.

Africa's awakening is slow in coming

In barely a handful of countries do economic recovery and democracy go hand in hand. The migration of disheartened youth continues. There are no convincing solutions for a long-term "fight against flight," either from outside the continent or from within. the so-called "Marshall Plan for Africa" is nom more than words. Politicians like Ghana's President Nana Akufo-Addo, who place great weight on democracy and the strength of the market economy, while also seeking to break free of the drug that is development aid, are a rarity in Africa. In most places, there is no responsible elite who consistently work to create a better future for the young generation. Africa's youth will continue to push for a generational shift. 2018 could turn out to be a year of setbacks for them – but that will only increase the pressure.