The protracted leadership crisis in Gambia has come to an end. Former leader Yahya Jammeh has finally stepped down and new President Adama Barrow has taken office. DW's Adrian Kriesch reports from Banjul. 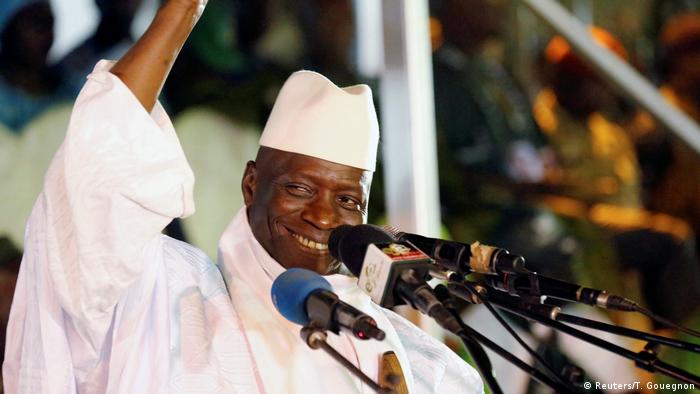 On Friday afternoon in Gambia's capital Banjul the streets in front of the State House were completely empty. Suddenly, several cars arrived in a single convoy; two Rolls-Royces pulled up, in which sat the leader's last allies, the presidents of Mauritania and Guinea. They had come to negotiate with entrenched leader Yahya Jammeh for what they said was the last time. Those were his cars they were sitting in. His name was even engraved on the headrests of the car. Like the vehicles, he was the "owner" of the country, as some Gambians said mockingly - the man who did not want to resign after 22 years in office, despite suffering an electoral defeat.

The Economic Community of West African States (ECOWAS) had asked Jammeh to resign by noon local time, adding that if he failed to step down, troops would enter the country and remove him by force. Thousands of soldiers from Senegal, Nigeria and Ghana were ready to fight, some already on Gambian soil. Then the deadline expired.

'We are not idiots'

At 2:30 p.m, there was sudden movement two streets away. Dozens of men exited a mosque after Friday prayers. Among the men was Ousman Bargie, head of the Gambian armed forces. He was in a very good mood. Young men snapped selfies with him and Bargie made the peace sign with his fingers.

"There will be no war," he told DW. "We're not idiots. I love my soldiers and Gambians." Bargie spoke about Jammeh as an ex-president for the first time and said that he was looking forward to a possible military intervention, but not because it might mean conflict. "If our brothers are sent here, we will welcome them with a cup of tea," he said. The people around him cheered.

"This is definitely good news, thank God," said a man nearby. "A peaceful solution is, in my opinion, the best," he added.

Just a few hundred yards away, Jammeh had dug himself in, clinging to power. In December 2016, he surprisingly lost the presidential election despite gaming the system through years of intimidating the opposition and massive human rights violations. At first he accepted the result and congratulated the winner, prominent businessman Adama Barrow. But a few days later Jammeh called for new elections, citing claims of irregularities, and insisted the Supreme Court rule on the validity of the vote.

However, the court had only one judge left after a series of dismissals, and he could not legally make such a ruling on his own. Jammeh then said he was planning to stay in office until Nigeria and Sierra Leone could send judges, which would only be possible in May at the earliest. 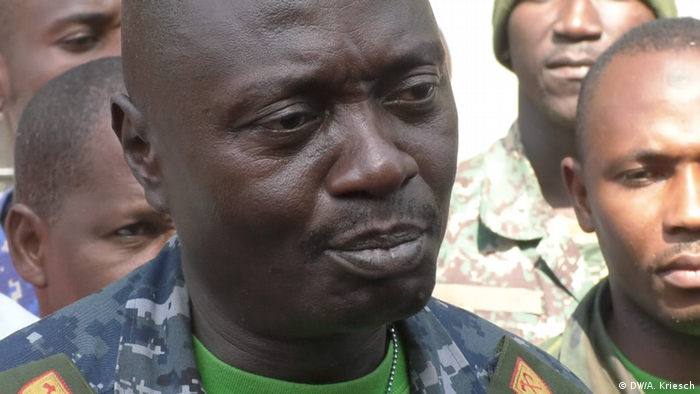 In this way Jammeh continued to push his luck, declaring a state of emergency and dissolving his cabinet. Many observers believed he was hoping to negotiate a better amnesty deal for himself, and for his remaining allies in ECOWAS. But his circle of his friends was getting ever smaller. Several ministers had already thrown in the towel over his behavior, including his vice president and his lawyer.

The strongman had also long since lost support from abroad. His counterparts at ECOWAS were almost all former opposition leaders who had been democratically elected, including Mohammadu Buhari in Nigeria, Alassane Ouattara in the Ivory Coast, Macky Sall in Senegal and Nana Akufo-Addo in Ghana. His fate was most likely sealed when he broadcast a private phone call with the ECOWAS chairperson, Liberian President Ellen Johnson Sirleaf, on state TV. His last supporters were Mauritania's Mohammed Ould Abdel Aziz, who also gained power through a coup, and Guinea's Alpha Conde, one of the few critics of military involvement in Gambia.

At 4:00 pm a second deadline passed. At Banjul airport, a military orchestra stood up, expecting the presidents of Guinea and Mauritania to arrive. On the other side of the airport, the last tourists left in the country boarded two Thomas Cook planes for their flights home. Thousands of tourists had been flown out over the last few days for fear of conflict, dealing a critical blow the local tourism industry overnight. 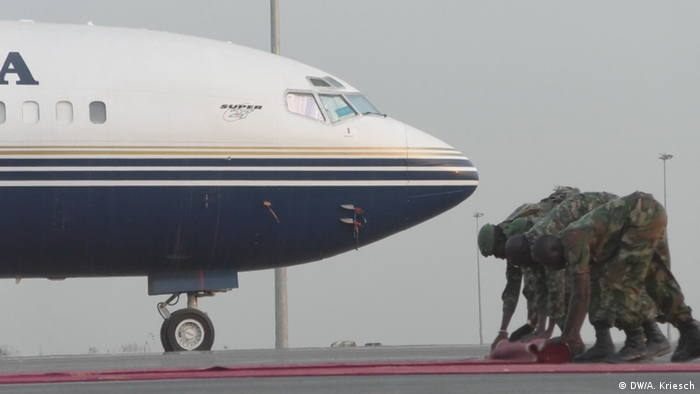 Gambian soldiers roll up the red carpet at the airport.

The musicians held their instruments at the ready, but only two Guinean diplomatic vehicles appeared, and then baggage was unloaded from a private plane. The plane flew off empty, soldiers rolled up the the red carpet again and the band packed up. Jammeh still had not budged.

Night fell as the last details were finally negotiated. Luxury cars shuffled back and forth between the State House and a local hotel. Shortly after 2:00 am on Saturday, Jammeh delivered a speech on state television. It would be his last. Bloodshed would not be necessary, he said. The streets of Banjul remained quiet, devoid of celebration. Gambia was exhausted after a month of uncertainty and tension. Many Gambians wanted to wait with their celebrations until Jammeh was out of the country and President Adama Barrow returned to Gambia. Luckily, the first part of their wish was granted later on Saturday, and Barrow says he will return as soon as ECOWAS deems it safe to do so.