After days of crisis talks and a military incursion, Yahya Jammeh has finally ceded power. Newly elected President Adama Barrow has said the former leader was expected to leave Gambia within hours.

Gambia's new President Adama Barrow said on Saturday that defeated leader Yahya Jammeh was expected to leave for Guinea within hours: Barrow said in a media interview  that he would return home to Gambia from Senegal once it was "clear" and a security sweep has been completed.

Ousted leader Yahya Jammeh ceded power to democratically elected Barrow after days of negotiations and threats of military action. "The rule of fear has been banished from the Gambia for good," Barrow said.

Jammeh, who was in power in Gambia for more than 22 years, spoke briefly with Gambian state television early Saturday, confirming he had stepped down. "I have decided today in good conscience to relinquish the mantle of leadership of this great nation with infinite gratitude to all Gambians," the ousted leader declared. Jammeh did not mention any specific details of a deal to leave power during his statement.

Jammeh had refused to step aside despite having lost the election and his opponent Barrow being inaugurated in neighboring Senegal on Thursday amid fears for his safety.

Regional leaders and United Nations negotiators had been meeting with the defeated leader in a last-ditch effort to get him to step aside.

A regional force assembled by the Economic Community of West African States (ECOWAS) had been poised to march on the capital, Banjul, after Jammeh missed his midday deadline to step down, but halted their advance Thursday to allow for eleventh-hour mediation talks. 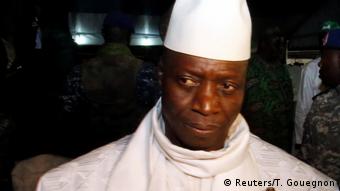 Yahya Jammeh said he would step aside peacefully

"This is a political misunderstanding. We are not fools! I love my soldiers and the Gambian people," he told DW.

"Even if they [ECOWAS troops] come, we are going to welcome them with a cup of tea."

He had previously stood by Jammeh, and his defection removed one of the last remaining pillars of support for Jammeh.

Jammeh had rejected Barrow's election victory on December 1, after initially accepting it.

He then faced significant pressure from regional powers and the UN to leave office after more than 20 years.

Fears of violence had run high as Jammeh refused to let go of the presidency.

The UN said about 45,000 people had fled from Gambia into Senegal, fearing that the situation might turn violent. Another 800 were said to have fled further south, to Guinea-Bissau.

"The next few days will be critical and more people may leave the country if the current situation is not resolved peacefully soon," warned UN High Commission for Refugees (UNHCR) spokesman Babar Barloch. 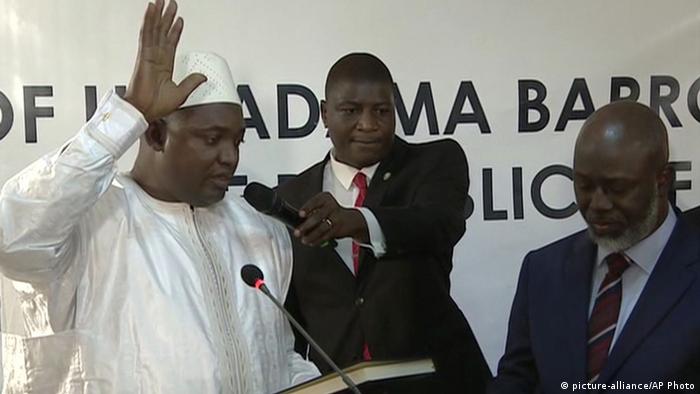 Barrow was in Senegal amid fears for his safety

Jammeh, who had seized power in a 1994 coup, initially conceded defeat to Barrow in the election but soon backtracked and claimed the vote was flawed.

Late Thursday he dissolved the government - half of it's members had already resigned - and pledged to name a new one.

Witnesses said his estate was heavily fortified on Friday.

Official figures in the election gave Jammeh 39.64 percent of the vote compared with Barrow's 43.29. Turnout was put at 59 percent.