West African leaders extend deadline for Jammeh to step down

A noon deadline set for the Gambia's Yahya Jammeh to cede presidential power has been deferred. Troops from five nations stood by for action as regional leaders flew in to make a final plea to the long-time leader. 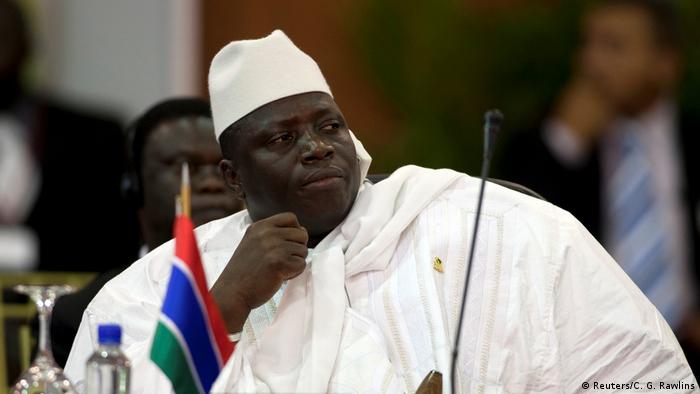 Soldiers from five West African nations were on standby on Friday, as the noon UTC deadline for Jammeh to quit passed. Jammeh was said to have asked for an extension to the time limit by four hours.

Speaking to DW's Adrian Kriesch, he said no fighting would take place.  "This is a political misunderstanding. We are not fools! I love my soldiers and the Gambian people," he said. "Even if they [ECOWAS troops] come, we are going to welcome them with a cup of tea," he added. 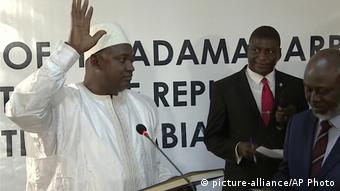 Gambia's President Barrow was sworn in on Gambian sovereign territory, albeit in the Senegalese capital

Meanwhile, the leaders of Guinea and Mauritania headed to the Gambian capital, Banjul, to make a last-ditch appeal to Jammeh. Guinean President Alpha Conde was expected to offer him asylum, either in Guinea or another country. Nigeria has also granted Jammeh the right to asylum.

Before boarding a flight with Mauritania's Mohamed Ould Abdel Aziz, Conde told reporters a political solution "must be found."

Aziz concurred. "We have every interest in achieving that. We have enough conflicts in Africa going on without adding another."

Meanwhile, Adama Barrow posted a picture with Senegal's President Macy Sall, saying he "performed a prayer" for his country.

The pair are longstanding allies of Jammeh, who has had more sour relations with other leaders.

Jammeh - who once said he would rule Gambia for a billion years - has rejected President Adama Barrow's December 1 election win,despite having initially appeared to accept it. He has since faced significant pressure from regional powers and the UN to leave office after more than 20 years.

Troops entered Gambia from Senegal on Thursday evening, shortly after Barrow's inauguration took place at the Gambian embassy in the Senegalese capital, Dakar. The force halted its advance to allow the eleventh hour mediation efforts to take place.

Hopes for a bloodless transition

Barrow has remained in Senegal while the talks take place, hoping Jammeh might stand aside once his safe passage has been guaranteed.

Meanwhile, the UN has said about 45,000 people have fled from Gambia into Senegal, fearing that the situation might turn violent. Another 800 were said to have fled further south, to Guinea-Bissau.

"The next few days will be critical and more people may leave the country if the current situation is not resolved peacefully soon," said UN High Commission for Refugees (UNHCR) spokesman Babar Barloch warned.

Devout Muslim Jammeh seized power in the former British colony in 1994. Official figures gave him 39.64 percent of the vote compared with Barrow's 43.29. Turnout was put at 59 percent.

The Senegalese soldiers were likely attacked by separatist rebels while on a mission in neighboring Gambia. Authorities believe the soldiers may have been taken hostage.