Cyril Ramaphosa has beaten Nkosazana Dlamini-Zuma, a former cabinet minister, and the ex-wife of President Jacob Zuma. He is now likely to become the country's next head of state. 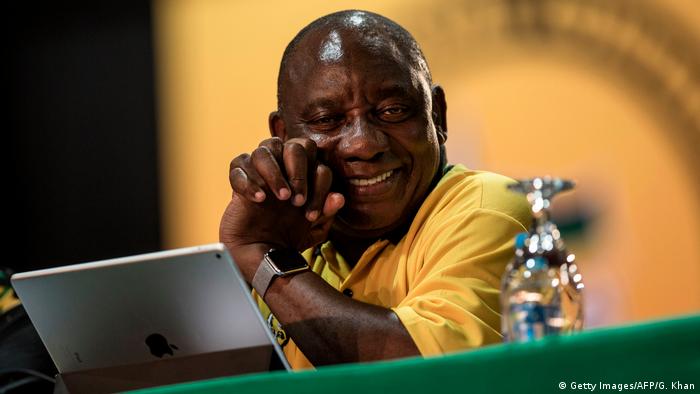 South Africa's Deputy President Cyril Ramaphosa, 65, has been voted in as the new leader of the African National Congress party.

Ramaphosa, a union leader-turned-businessman and one of South Africa's richest people, is now in line to succeed President Jacob Zuma, whose reign has been plagued by corruption scandals, economic slowdown and growing anger at the once-omnipotent party.

The vote was a long and acrimonious process. Delegates from around South Africa cast their ballots after repeated delays caused by disputes over who was entitled to vote.

Hundreds of attendees were banned from the poll, raising the possibility that supporters of Dlamini-Zuma, a former minister who is Zuma's ex-wife, could launch legal appeals against the result.

"I hope you will cooperate with the new leadership ... as we move to the 2019 elections," Baleka Mbete, the party chairwoman, told delegates.

The ANC, which has ruled since 1994 when Nelson Mandela won the first multi-racial vote, could struggle to retain its grip on power in the 2019 election due to falling public support.

Ramaphosa has often been accused of failing to confront Zuma while serving as his deputy since 2014.

In June the ANC welcomed an investigation by South Africa's anti-corruption watchdog into several allies of Zuma allegedly linked to corruption at three state-owned companies.

Zuma, who could face prosecution for corruption charges, will step down as party chief at the conference but will remain as head of state ahead of the 2019 vote.

"I'm bowing out very happy because I think ... I made my contribution, so I'm very happy," said Zuma on Monday as he walked around the vast conference center hosting the event.

The ANC suffered a setback during municipal elections in 2016, taking less than 54 percent of the vote and losing an absolute majority in five of the six biggest metropolitan areas.

South Africa's deeply divided ruling African National Congress (ANC) is set to vote for a new party leader. The party of freedom icon Nelson Mandela has been embroiled in a bitter battle over who will replace Jacob Zuma. (16.12.2017)

In his last speech as head of the ANC, South African President Jacob Zuma has admitted people are not happy with the state of the party. The race to succeed him is too close to call. (16.12.2017)

Cyril Ramaphosa has beaten Nkosazana Dlamini-Zuma, a former cabinet minister and the ex-wife of President Jacob Zuma. He is now likely to become the country's next head of state. (18.12.2017)