An understanding must be reached with the Taliban to stabilize Afghanistan. German Foreign Minister Heiko Maas kept hearing this on his trip to the region. Christoph Hasselbach says this new course is inevitable. 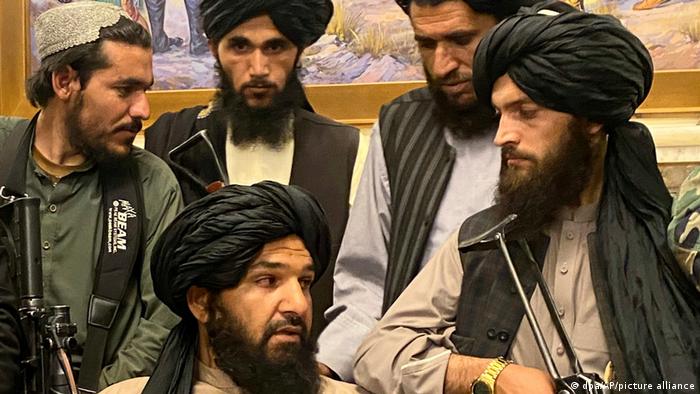 A rule based on armed violence: Taliban fighters in the presidential palace in Kabul

The new reality has caught up with Heiko Maas very fast. The same foreign minister who, just a few weeks ago, ruled out a swift takeover of power by the Taliban is now, after their victory, seeking to reach an understanding with them. "There is absolutely no way around talks with the Taliban," Maas said on Tuesday in Doha, Qatar, one of the countries he visited on this trip. After all: "We cannot afford instability in Afghanistan."

It is even conceivable that Germany might reopen its embassy in Kabul. The German foreign minister was quick to say that this would not indicate recognition of the Taliban under international law.

But diplomatic phrases like this cannot disguise the underlying helplessness. It's the age-old dilemma: If you want to have any influence in a country, even if just to provide humanitarian aid, you need to be in contact with the people who control that country. No matter what you think of them.

But back to Maas's justification for talks with the Taliban: "We cannot afford instability in Afghanistan." Initially, this sounds like the height of hypocrisy. Stability under medieval Islamists is still better than anarchy?

But the stability argument is precisely what Maas has heard repeatedly on this trip. From the Pakistani Foreign Minister Shah Mahmood Qureshi, for example, whose country has an almost 2,500-kilometer (1,553-mile) border with Afghanistan. "Do not let the economic collapse take place. Instability is in nobody's interest," he warned.

Qureshi is thinking primarily about a new influx of refugees. This is the nightmare scenario that is alarming not only Islamabad but also Tehran and Ankara, as well as Berlin and other European capitals.

In the current German election campaign, Armin Laschet, the CDU/CSU candidate for chancellor, has warned, with reference to Afghanistan, that a situation like the one in 2015 "must not be repeated." Back then, hundreds of thousands of refugees, many of them fleeing the civil war in Syria, arrived in the space of a few months.

Whatever you do, don't encourage any fresh movements of refugees — pretty much every European government is taking the same view. In France, for example, where the far-right candidate Marine Le Pen is likely to score points again with the migration issue in next year's presidential election; in Denmark, where the Social Democrats are pursuing an especially tough asylum policy; in Austria, which doesn't want to take in a single Afghan refugee; and in all the central and eastern European EU member states, which reject distributing recognized refugees around EU countries. This makes stability in Afghanistan the dominant interest.

Germany has little room for maneuver

Not, however, at any price. Heiko Maas hopes to use economic aid as leverage to persuade the Taliban to make concessions on human rights. This leverage is not great: The Taliban will probably only pretend to have reformed for as long as they are able to access Western funds. Any real change on their part, as Pakistan's Foreign Minister Qureshi told his German counterpart, is at present merely a hope. Besides, countries like China and Russia impose no moral conditions on Kabul.

The room for maneuver available to German diplomacy remains very narrowly defined. This is a bitter end: Germany was among those who drove the Taliban from power 20 years ago and wanted to bring democracy and human rights to Afghanistan. Now, its foreign minister is seeking an understanding with the old-new rulers, to save what can be saved. But there is really no alternative.

Spain: About 1,500 evacuated from towns near Zaragoza due to fires 2h ago

Norway euthanizes Freya — the walrus that drew crowds 6h ago

US lawmakers in Taiwan on heels of Pelosi visit 7h ago

Dozens die in Coptic church fire in Egypt 10h ago

Opinion: India's 75th anniversary — from snake charmers to a global superpower 2h ago