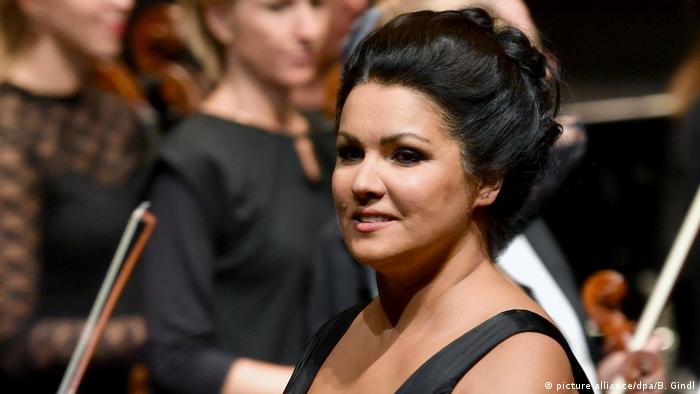 Anna Netrebko said she went straight into isolation when she noticed she was getting sick, even if the tests were still negative at that point.

She has been treated in a Moscow clinic for the past five days for pneumonia caused by a COVID-19 infection. She found reassuring words for her fans on Instagram: "I will recover soon! The devil is not as terrible as he is described," the opera singer continued.

On Friday, September 18, she spent her 49th birthday in hospital, too.

But the Russian-Austrian singer was not daunted. She told her fans that where you spend your birthday doesn't matter, as long as you feel loved — and posted an unusually private, unglamorous selfie from her hospital bed.

The Moscow Bolshoi Theater had already cancelled a performance of Giuseppe Verdi's opera "Don Carlos" that would have included Netrebko because bass singer Ildar Abdrazakov had dropped out due to a COVID-19 infection.

Just days earlier, Anna Netrebko participated in the reopening of the renowned theater that had been closed due to coronavirus pandemic restrictions since March.

Her husband, the Azerbaijani tenor Yusif Eyvazov, appears to have contracted the virus without having had any symptoms: He has been found to have antibodies. Their son has been tested negative so far.

The couple had been on stage together at the Salzburg Festival at the end of August. On Instagram, Netrebko wrote she and her husband made a conscious decision to return to the stage, which meant accepting the risk of possible infection due to travel and rehearsals.

She told her followers on Facebook that she did not regret having returned as she was convinced that people need culture now as much as ever. She also does not seem to fear a possibly severe case of COVID-19. To the contrary, it sounds like the opera star is relieved that the time of constant tests, preventive quarantine and general uncertainty is  over: "I am glad that this is over for me now," Netrebko wrote on Instagram.

Meanwhile, the Bolshoi Theater is not the only Russian venue to have cancelled performances. About 30 performers tested positive for the coronavirus at the Mariinsky Theater in St. Petersburg in mid-August, most of them ballet dancers. According to a spokesman for that city's health department, three of them are undergoing inpatient treatment, wrote the Tass news agency.

An opera singer with a rock star, a dead man with his daughter, a country star with a rapper: There have been a lot of unusual duet partners throughout pop music history that at first glance don't seem to fit together.