From the Bolshoi to the attic: Russian ballet in lockdown | Culture| Arts, music and lifestyle reporting from Germany | DW | 28.05.2020

From the Bolshoi to the attic: Russian ballet in lockdown

The pandemic has also affected dancers on leading Russian stages, but dancing is still continuing during the COVID-19 lockdown — just in a different way. DW's Russia correspondent Yuri Resheto reports. 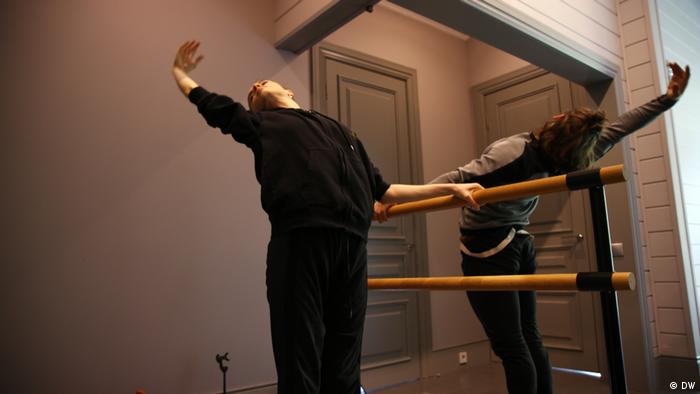 How does classical ballet work in a space of just six square meters (66 square feet)?

The answer can be found in the attic of a country house near Moscow. As the city is locked down to avoid further spread of the coronavirus, two world stars of international classical ballet train here every morning: Ivan Vasiliev, the first soloist dancer of the St. Petersburg Mikhailovsky Theatre, and Maria Vinogradova, the leading soloist of Moscow's Bolshoi.

The two share just one meter of ballet bar — nothing like the large hall filled with mirrors they used to train before the coronavirus pandemic. Nevertheless, there is no cheating: stretching, lengthening, keeping one posture straight, endurance and expression, everything as usual — for two hours.

Moscow: Dancing when no one is watching

Bolshoi dancers perform in lockdown for an absent audience

Due to the coronavirus pandemic, all Russian theaters and concert halls have been closed nationwide since mid-March. The most important dance companies have also been forced to take leave, such as the Mariinsky, Bolshoi and Mikhailovsky theaters in St. Petersburg and Moscow.

Since then, Vasiliev and Vinogradova have not set foot on stage either.  Nevertheless, the dance partners, who are also married, do not want to give up. "You can take the theater away from us artists, but not our creativity," says Ivan Vassiliev, smiling. He then asks Vinogradova to look for more cheerful music on her laptop. The training continues until they are drenched in sweat.

"We practice every day in order to somehow stay in shape — but of course we've lost it somewhat: without a stage, without real rehearsal rooms and without the physical strain we are normally used to when we train more than six hours a day," Bolshoi dancer Vinogradova told DW. 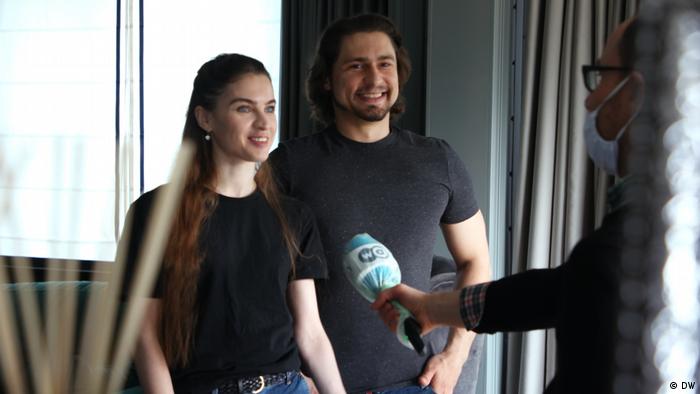 And she's not alone feeling that way. For over two months now, Russia's entire cultural life has been at a standstill. The empty auditorium of the Bolshoi Theatre is one of the symbols of this standstill.

Its director, Vladimir Urin, is not very optimistic: An average Bolshoi performance involves over 200 people, in the orchestra pit as well as behind and on stage: orchestra, choir, soloists, extras, make-up artists, technical staff. "Of course, you can't keep your distance under such conditions, " Urin told DW. "At most, one could only measure the body temperature of the staff. But a mask on a singer would be unthinkable. Just as it would with someone playing a wind instrument." And of course, classical ballet cannot be performed without physical contact. Urin's sobering conclusion is that music and dance theaters can only reopen "when all these precautions are lifted."

Yet nobody knows when this will happen. Along with the US and Brazil, Russia is one of the countries with the most coronavirus infections — and the number is rising dramatically. Due to the varying measurement methods, there is controversy over how many Russians are actually dying from the virus. Critics accuse the authorities of concealing the true number of deaths. Many Russian doctors are at their limit due to the strain, and many have been infected themselves. Up until now, the coronavirus has had its grip on public and private life in Russia. 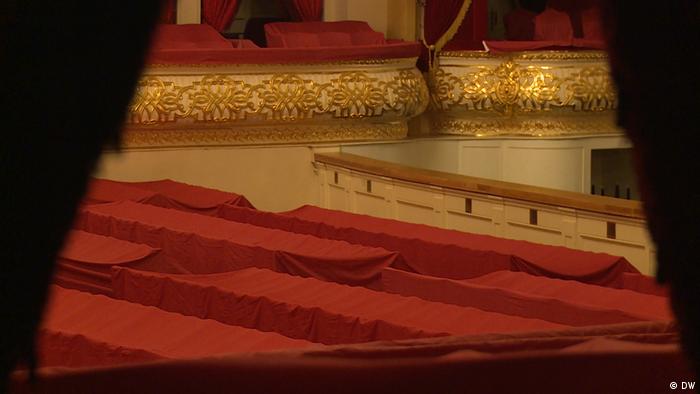 The empty Bolshoi Theater in Moscow

Bolshoi is an exception

It is to be expected that many people will lose their jobs at Russian companies and other institutions. The country's artists are also worried about how they will survive. Rumors about the dissolution of numerous orchestras and theaters under state and municipal sponsorship are spreading. 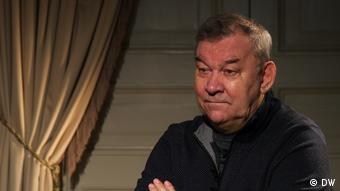 However, these measures will probably not affect the Bolshoi, Russia's number one theater with its symbolic significance. Urin is certain that the magnificent theater, which is located near the Kremlin, will not have to fear any cuts: "A little over 60% of our budget comes from state subsidies. The rest is our income and sponsorship money. All sponsorship money and state subsidies have been maintained for us so far, although we are not working at the moment. Also, the government has recently decided to allocate additional funds to support the Bolshoi," Urin said.

Whatever the coronavirus crisis may still have in store, for the two ballet dancers Ivan Vasiliev and Maria Vinogradova, one thing is certain: they want to dance, no matter when their theaters reopen. "I've got my ballet jersey on at home too, so I'm ready for the stage," says Vasiliev and makes 20 grand jetés around a flowerbed on the village square. On a real stage, he would have space for only nine. So, that's at least one silver lining.

With social distancing rules to stay in place till late June in Germany, cultural institutions are finding ingenuous ways to safely bring people together. From noodle hats to parking lot prayers, here's a selection. (27.05.2020)

Sergei Polunin, ballet and homophobia: How far can artists go?

Despite his homophobic statements, dancer Sergei Polunin has been allowed to continue performing at the Bavarian State Opera. Critics say the remarks are hurtful and damage ballet as a whole. (27.02.2019)

Drive-in movie theaters are experiencing a renaissance in Germany, and not just for films. People flock to church services and concerts there, too, both banned in times of the coronavirus pandemic. (30.04.2020)