Open Day at the mosque: 'Everyone must contribute'

The Cologne Central Mosque has been making headlines recently, and the effects have not all been negative. On the contrary: An especially large number of curious, non-Muslim visitors attended this year's mosque Open Day. 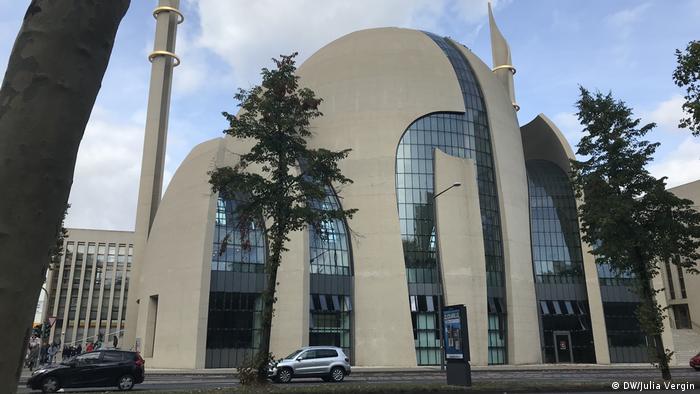 "If not now, then when?" thought Dana and Julia. The two young women have travelled from their hometown of Olpe to the Central Mosque in Cologne, not despite but precisely because of the negative headlines surrounding its opening by the Turkish president, Recep Tayyip Erdogan.

It's already hard enough for Muslims, Dana and Julia say. Too many people are going around with prejudices and irrational fears. For these two women, participating in the mosque open day was also a way of signaling that Islam is part of Germany.

Dana, Julia and the other visitors have been sitting on the soft blue carpet in the big prayer room of the Central Mosque, listening to the speaker's words of welcome.

Read more: Islam in Germany: Muslim prefer to be talked to rather than talked about

The atmosphere is relaxed and peaceful. Many of the visitors are busy snapping photos, tilting their heads back to admire the 35-meter-high (115 feet) transparent dome. Light floods in, filling the room and lighting up the gold calligraphy on the walls.

The "Open Day at the Mosque" has taken place every year since 1997. This year, around 900 houses of prayer opened their doors to visitors, including the Central Mosque in Cologne — the largest mosque in Europe outside Turkey. The prayer room can hold up to 1,200 worshippers, but it doesn't have many visitors yet. Little by little other guests start arriving. At first journalists seem to be in the majority. No surprise there — this mosque is famous, not just because of its size. 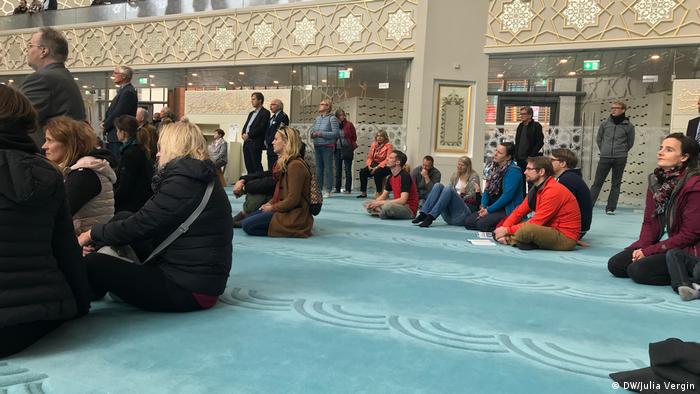 Visitors came to the mosque on Germany's Day of Unity

Finished at last after nine years, this impressive building of steel, glass and concrete is the central mosque of the Turkish-Islamic Union for Religious Affairs (DITIB). The association has long been regarded as an instrument of Ankara, rather than an independent German organization. The fact that it was the Turkish president who opened the mosque last Saturday has caused a lot of displeasure.

Today, the integration minister of North Rhine-Westphalia, Joachim Stamp, also gives an address — and he takes the opportunity to criticize DITIB. "I would have liked the inauguration of the mosque to have been a symbol of German Islam," he said, while having the Turkish president open it had given a different impression.

"That really takes the cake. Not even the architect attended!" an elderly woman declares. She doesn't want to give her name, but says she's outraged at how the opening went last weekend. "It was an opportunity for Turks and Germans to celebrate together."

Her view of the mosque itself isn't clouded by this event though, she says. The mosque is capable of being just as powerful an influence for integration as other houses of God: "But everyone must contribute." Both the woman and the friend with her consider it their duty to come here and inform themselves about Islam and about the mosque.

People who come here are open

"A lot of curious non-Muslims have come," says Cengiz Özen, who is himself a visitor and a Muslim. He's pleased. He thinks many people are curious about this mosque in particular — because of Erdogan, of course. Actually, though, he says, that shouldn't be a reason. "Just as Muslims should visit churches, non-Muslims should be able to come to mosques. Days like these help dismantle prejudices against Muslims."

The Open Day at the Mosque, which is intentionally held on the same day as the celebration of German unification, aims to create a space for contact between Muslims and non-Muslims. The mosque offers tours, invites people to attend lectures and allows guests silently to participate in the prayers. Dialog is the magic word. 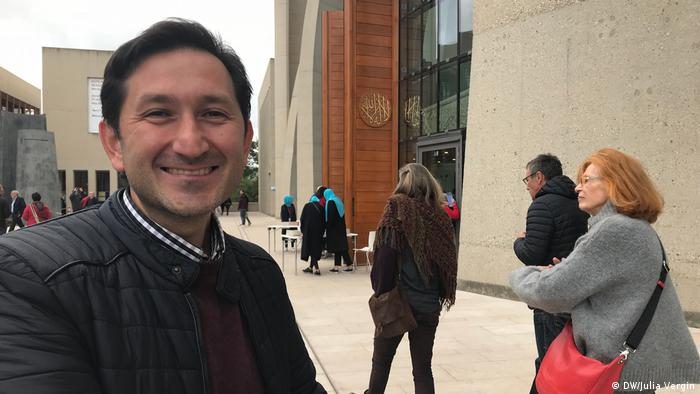 Cengis Özen says the mosque has a pleasant atmosphere

Not everyone thinks it's a good thing. Sabri says the Open Day offers not dialog but "Dialüg" — in other words, that it's a lie. The 38-year-old with the conspicuous beard came to see what image of Islam is being conveyed to the non-Muslims. His conclusion is the same every year: That it's an inauthentic one. Sabri believes that, for it to be authentic, Islam must be lived exactly as it has been handed down in the Quran and the Sunna, the body of Islamic custom and practice based on Muhammad's words and deeds. For him, then, this mosque open day is a farce.

For everyone else, it's a chance to get into conversation and to see with their own eyes something that was previously strange and unfamiliar. As they explore all the nooks and crannies of the complex, the faces of most visitors are open and interested. Sabri, on the other hand, has already beaten a retreat. And of course there are others who won't walk up the steps to the main entrance of the Central Mosque, even on a day like this.

A court has again refused to grant arrest warrants for imams accused of spying for Turkey's government in Germany. The Turkish-Islamic Union for Religious Affairs, a state organization, regularly sends clerics abroad. (23.10.2017)