On his first visit to Israel and the Palestinian territories, the UN leader has to balance the demands of both sides of the conflict to make any significant advances toward peace. DW examines the historic trip. 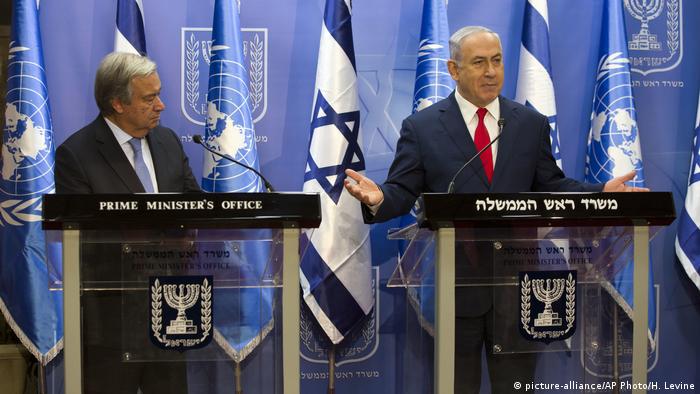 UN Secretary-General Antonio Guterres on Monday embarked on a historic trip to shore up support for the Middle East peace process. The aim is to bring a peaceful end to the Palestinian-Israeli conflict, which has dominated the region's security agenda for decades.

The UN chief faces several challenges on both sides of the conflict, not the least of which is due to the delicate relationship between Israel and the UN itself.

Israel's trust in the UN has diminished in recent years in response to criticism and resolutions targeting the Middle East nation, which it sees as undermining its sovereignty and status in the region.

For example, in March, the UN's secretariat had to distance itself from the Arab state-dominated UN Economic Social Commission for Western Asia (ESCWA) after it published a report that accused Israel of establishing an "apartheid regime."

The UN "will lose both support and funding" from Israel and other countries, including the US, if it fails to "drastically change its behavior," said Israeli Deputy Foreign Minister Tzipi Hotovely on Sunday, ahead of Guterres' arrival.

"The secretary-general has an opportunity for a historic rectification of the longstanding discrimination and bias against Israel."

Re-establishing trust between the UN and the Israeli government is a priority during his first trip, for without it the UN chief will be unable to make any significant advances toward a peaceful solution.

For Guterres, striking a balance between impartiality and the UN's inner workings means prioritizing the importance of the peace process and getting both parties to adhere to the international community's vision as set out in UN Security Council resolutions.

The key, in terms of going forward, lies in setting the right tone at the beginning of his mandate, which will dictate much of the relationship he maintains with Israeli and Palestinian authorities for the remainder of his time at the UN.

However, his ideas on how to pursue the peace process and kick-start negotiations may fall on deaf ears, due to growing instability in the region and Israel's priorities elsewhere.

For Netanyahu, the issues at hand concern Iran and its role in Syria. Before meeting with Guterres, the Israeli premier on Monday warned of Tehran's "military entrenchment" in Syria and how it forms part of Iran's declared goal to "eradicate Israel."

"This is something Israel cannot accept. This is something the UN should not accept," Netanyahu said, adding that the UN has failed to curb Palestinian hate speech within the UN organization and also to stop arms from reaching the Hezbollah militant group in Lebanon.

After visiting the West Bank on Tuesday, Guterres is scheduled to visit the Gaza Strip, but it will mark a missed opportunity for the UN leader.

One of the most challenging obstacles to the peace process is Hamas' relationship with Fatah, and Guterres is not scheduled to meet any officials from the Islamist movement.

Instead, Guterres is expected to pressure Israel to provide Gazans with access to hospitals in Israel and to loosen the blockade on the coastal enclave.

Unless Abbas' Fatah party manages to bring Hamas into the fold, the prospect of a two-state solution will continue to elude both sides of the decades-long conflict, solely because it shows that the Palestinian factions cannot govern together.

While Palestinian governance is a key feature of the peace process, there is also the issue of Israel's security. Hamas made some overtures in May when it backtracked on its call for the eradication of the state of Israel, but more will be required for a peaceful solution.

"I understand the security concerns of Israel and I repeat that the idea or intention or the will to destroy the state of Israel is something totally unacceptable from my perspective," Guterres said during a joint press conference with Netanyahu on Monday.

For now, the two-state solution remains an elusive vision, even if only because it will take more than a mediator to bring warring parties together to end the conflict. It requires trust, intention and compromise, which authorities on both sides of the conflict are short of at this juncture. But by striking a balance, Guterres' visit has the potential to turn a new page.

"I dream that I will have the chance to see in the Holy Land two states able to live together in mutual recognition, but also in peace and security," Guterres said.