The Oktoberfest beer festival does much to keep Bavarians' reputations as yodeling, thigh-slapping funsters alive and well. Yet when it comes to the price of a brew, they get all serious. 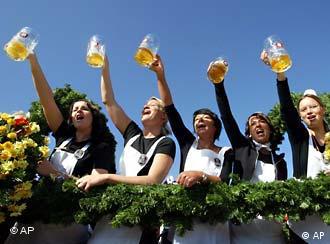 Critics of the Oktoberfest say beer prices are sky high

The 30-cent increase at the might not sound like a huge price hike, but it is enough to inflame the passions of the Bavarian beer lover.

The rise is "unjustified", claims the Verein gegen betrügerisches Einschenken (VGBE), a Munich-based organization which runs checks at festivals and beer gardens to make sure landlords are not short-changing customers by not quite filling their glasses.

"Let us not forget that this is a folk festival," a VGBE spokesperson told the dpa news agency. "Landlords, breweries and the city all benefit so much [from the Oktoberfest] that there is no need to charge customers more."

Critics of the Oktoberfest say this year's average beer price increase of 3.7 percent is too high given that the official inflation rate in Germany is 2.3 percent.

Economists warn not to read too much into this special market, however. 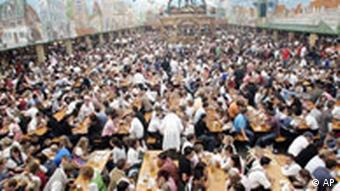 Such large beer tents cost a lot to build, dismantle and store in the off-season

A number of bloggers have analyzed the price hike by comparing historical changes to the price of beer at the Oktoberfest with the price of consumer goods.

Data presented on the Ganz-Muenchen blog showed that the price of super gasoline increased 508 percent between 1950 and 2010. The price of beer at the Oktoberfest rose by a whopping 1081 percent over the same period.

The same website pointed out however that the average German had to work 82 minutes to buy a liter of beer at the festival in 1950. In 2006 it was only 28 minutes.

Landlords who run tents on the Wiesn, the fields that play host to the annual event, have defended the price rise by saying their costs are on the up, and that they have to compensate for that by adding a few cents to the price of the liquid nourishment.

A spokesman for Wiesnteam, a citizens' group that provides information about the festival, told Deutsche Welle that taking part in Oktoberfest is both an expensive and a complicated business for publicans.

"The price of everything is going up, from electricity to the storage facilities for tents," the group's spokesman said. "And they also have to comply with security requirements, such as fire protection, imposed by the city. It all costs money." 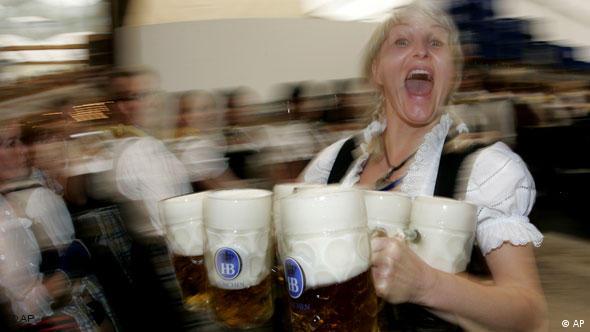 Ultimately the Wiesnteam doesn't believe the slight price increase will do anything to slow the stream of visitors expected to flock to the Wiesn on September 17, and says many would probably round up their 9.20 euros to a flat 10 in any case.

"People always get annoyed about having to pay a bit more, but they'll still come," the Wiesnteam spokesman said, adding that that is standard Bavarian behavior.

History shows that Bavarians are willing to go to some lengths to avoid having to pay so much as an extra cent for their amber nectar.

Back in the 1800s, any suggestion of rising costs plunged Munich into a state of uproar. Breweries were trashed, the military was brought in, people were hurt and sometimes even killed, and the proposed price increase was invariably withdrawn.

It wasn't until 1910 that local brewers were able to push up the cost of a brew without being left to cry over spilled beer.

Taybeh, from the Palestinian village of the same name, is more than just a beer - it represents one entrepreneur's attempt to support his people and help build a new state. And it is on sale in Germany. (02.04.2011)