Taybeh, from the Palestinian village of the same name, is more than just a beer - it represents one entrepreneur's attempt to support his people and help build a new state. And it is on sale in Germany. Nadim Khoury is the West Bank's first and only brewer

It's 5 o' clock in the morning as the machinery roars into life in the Taybeh brewery in the West Bank, watched by master brewer Nadim Khoury. It's still cold outside, which is not surprising as the brewery sits on top of one of the hundreds of bare, rocky hills that stretch across the Holy Land.

The people of Taybeh are proud of many things. They are one of the few Christian communities in the region. They have one of the earliest Christian churches, and the Bible says Christ visited the village when it was known as Aphram. Local legend has it that Sultan Saladin renamed the town Taybeh while he was busy driving the European crusaders out of the Middle East in the 12th century.

The medieval monarch's whimsical name-change was a taste of things to come, because the Arabic word Taybeh translates as "delicious." And nearly a millennium later, the beer that found its home in the town is celebrated as just that. 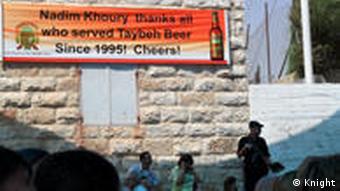 Taybeh beer is Nadim Khoury's life's work. The affable, moustachioed businessman was born and raised in Taybeh, but went off to Boston in the US to study engineering. During his student days in Massachusetts, his home-brewing hobby became an all-consuming passion.

A date with destiny

Khoury's fate was sealed in 1993 when Yasser Arafat and Yitzhak Rabin signed the Oslo Accords. "I was encouraged very much to come back and invest in my country after the Oslo agreement," he told Deutsche Welle. "I'm always optimistic because there's nothing left for us except the high hopes for the future. I'm optimistic because some day we will have freedom and our own country, no doubt."

Said, a young Palestinian who attended Taybeh's annual Oktoberfest beer festival, was keen to explain what Taybeh represents. "It represents a national product, something that we as Palestinians produce," he said. "I think it's important to have something like this as a symbol, so we don't have to drink Israeli beer anymore."

The link between Taybeh beer and Palestinian identity has remained strong since the company was founded in 1995. Nadim's father made his son seek the approval of Yasser Arafat himself before allowing the first batch to be brewed. "My father was old-school. I had the courage to open, but he said 'I want the blessing of our president,'" he explained. "I said 'sure, why not?' So I went with him. It was a short conversation, but I remember his words: 'With God's willing, go ahead and open.'"

Opening a brewery in an area with a 95 percent Muslim population obviously has its difficulties. Advertising alcoholic drinks is banned. On top of that, there are the multiple headaches of getting the beer past military checkpoints, into Israel and onto the international market.

"Sometimes, you have to wait in line for six or seven hours," Nadim explained. "And keep in mind that the beer is natural, with no preservatives or additives. It cannot take the sunlight and heat, and the security measures that the Israelis force on us. But we have to do it. This is part of doing business in Palestine." 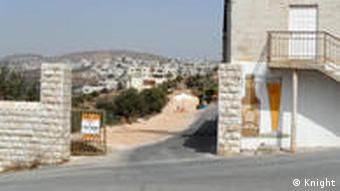 One way around these problems is to brew the beer abroad. And it was a German, Christl Stark, owner of the Hamburg-based importer ‘House of 131 Beers,' who first made contact with Nadim and got Taybeh brewed under license in Europe. It all started in 1997, says Stark.

The prestige of having his beer sold in the home of the beer purity law was worth the trouble of lugging a couple dozen bottles of beer across the continent, explains Nadim. "I have full confidence in the Bavarian law," he said. "I like it. I was a home-brewer when I started, and I learned how to brew according to this way. And I kept it that way to compete with foreign beers on a quality basis, not a quantity."

Germany's purity law, which has its origins in Bavaria and dates back to 1516, stipulates that beer brewed in Germany for the German market should only contain water, hops and malt. The law does not apply to imported beer, but some international brewers stick to it for quality purposes.

But Taybeh's European appeal is still modest. Stark sells just 500 cases a year throughout Europe - mainly to Sweden, France and Britain. The importer thinks Germany is a tough market for Palestinian products.

"I can't say the beer is particularly successful because the Germans think two things," said Stark. "First, they think we owe Israel a large debt. And on the other hand, the Germans see it often completely wrong, and think the Palestinians are all terrorists."

But none of this is nearly enough to put off the entrepreneur and eternal optimist Nadim. "I have done this from my heart, and I strongly believe in what I'm doing, and I want other Palestinians to be encouraged and come back and invest in their country," he said.

"This is the way Palestine can be built and establish a country… with their own people, not to keep waiting for US aid or European aid. A business like Taybeh beer in Palestine is permanent aid for Palestine."

It might as well be a rite of passage for non-Germans living here to visit their first Oktoberfest. To chronicle a first trip to Munich's biggest party, Deutsche Welle sent an Oktoberfest rookie to the 'Wiesn.' (20.09.2010)

Proposal for one-state solution gains favor among Israelis and Palestinians

The idea of a single state solution to the Israeli-Palestinian problem is gaining renewed currency with a twist: this time around the proposition is supported not only by Palestinians but also by Israeli right-wingers. (29.07.2010)

Germany's top diplomat flew to Israel on Sunday for a two-day visit aimed at boosting peace talks with the Palestinians and continuing Germany's support for moderate forces inside the Gaza Strip. (07.11.2010)